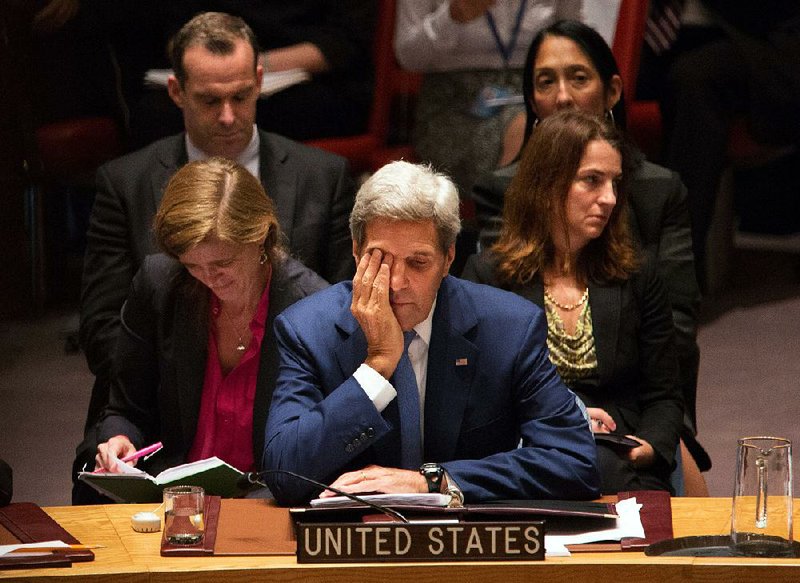 Secretary of State John Kerry attends a United Nations Security Council meeting Wednesday at U.N. headquarters. Kerry said the United States would have “grave concerns” if Russia were to strike targets in parts of Syria where Islamic State militants or al-Qaida forces were not operating. 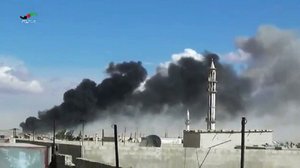 Photo by AP/Homs Media Center
This video image shows the aftermath of an airstrike Wednesday in Talbiseh in Syria’s Homs province. Russian officials said Islamic State fighters were targeted, but U.S. military said the militants weren’t in that area. 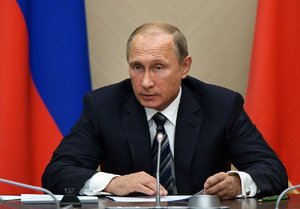 Russian President Vladimir Putin called it a pre-emptive strike against extremists from the Islamic State, also known as ISIL or ISIS.

The ministry did not give specific locations.

But a senior U.S. official said the militants aren't in the western part of Syria -- beyond Homs -- where it appears the strikes were directed against opposition groups fighting Assad. The official wasn't authorized to discuss the Russian airstrikes publicly and spoke on condition of anonymity.

At the Pentagon, U.S. Defense Secretary Ashton Carter also said the Russians appeared to have targeted areas that did not include Islamic State militants and complained Moscow did not use formal channels to give advance notice of its airstrikes to Washington, which is conducting its own airstrikes in Syria against the Islamic State.

Russian Foreign Minister Sergey Lavrov dismissed claims that the airstrikes targeted positions of the Syrian opposition. Speaking on the sidelines of the United Nations General Assembly, he said that the Russian air forces are cooperating with the Syrian pro-government military to hit "exclusively" Islamic State targets.

"Rumors that the targets of these strikes were not IS positions were groundless," he said, adding that the Russian Defense Ministry has clearly stated on its website the targets and objectives of Russian airstrikes in Syria.

The Islamic State controls parts of Homs province, including the ancient city of Palmyra. Homs also has positions run by al-Qaida's affiliate in Syria, known as the Nusra Front. Both groups have fighters from the former Soviet Union, including Chechens.

Khaled Khoja, head of the Syrian National Council opposition group, said at the U.N. that Russian airstrikes in four areas, including Talbiseh, killed 36 civilians, with five children among the dead. The claim could not be independently verified.

Russian Foreign Ministry spokesman Maria Zakharova said claims of civilian casualties were part of an "information war ... which, it appears, someone prepared well."

At the Pentagon, Carter said he couldn't confirm reports that the Russian strikes may have hit civilians.

Putin, who is Assad's most powerful backer, justified the airstrikes as a move not only to stabilize Syria but also to help stifle global terrorism.

"The only right way to fight international terrorism -- and it is gangs of international terrorists that are fighting in Syria and in neighboring countries -- is to act preventively, to fight and destroy militants and terrorists on the territories that they already occupied, not wait for them to come to our house," Putin said at a meeting of government officials in Moscow

U.S. Secretary of State John Kerry said Washington was prepared to welcome Russian military action in Syria as long as it is directed against the Islamic State and other al-Qaida affiliates, but would have "grave concerns" if it conducted strikes against other groups.

The U.S. and Russia both agree on the need to fight the Islamic State but not about what to do with Assad. The Syrian civil war, which grew out of an uprising against Assad, has killed more than 250,000 people since March 2011 and sent millions of refugees fleeing to other countries in the Middle East and Europe.

Russia's first airstrikes in Syria came after Putin met Monday with President Barack Obama on the sidelines of the U.N. General Assembly in New York, where they discussed Moscow's military buildup in the country. Obama had said the U.S. and Russia could work together on a political transition, but only if the result was Assad's departure.

Kerry said Russian operations must not support Assad or interfere with those of the U.S.-led coalition that is already attacking Islamic State targets. He called for an urgent start to military-to-military talks to prevent any kind of conflict between Russia and the coalition.

"If Russia's recent actions and those now ongoing reflect a genuine commitment to defeat [the Islamic State] then we are prepared to welcome those efforts and to find a way to de-conflict our operations and thereby multiply military pressure on ISIL and affiliated groups," Kerry said. "But we must not and will not be confused in our fight against ISIL with support for Assad."

He added that the U.S. "would have grave concerns should Russia strike areas where ISIL and al-Qaida-affiliated targets are not operating," he said. "Strikes of that kind would question Russia's real intentions fighting ISIL or protecting the Assad regime."

Carter expressed disappointment that the Russians did not use formal channels to provide the U.S. with advance notice of its airstrikes, but instead sent an official to the U.S. Embassy in Baghdad for what he characterized as an unprofessional "drop-in."

"The U.S.-led coalition will continue to fly missions over Iraq and Syria as planned, in support of our international mission to degrade and destroy ISIL," Kirby said.

Earlier Wednesday, Russian lawmakers voted unanimously to allow Putin to order the airstrikes in Syria, where Russia has deployed fighter jets and other weapons in recent weeks. The Federation Council, the upper chamber of the parliament, discussed Putin's request for the authorization privately in a debate notable for its speed.

Under the Russian constitution, Putin had to request parliamentary approval for any use of Russian troops abroad. The last time he did so was before Russia annexed Ukraine's Crimean Peninsula in March 2014.

Putin insisted Russia will not send ground troops to Syria and that its role in Syrian army operations will be limited.

"We certainly are not going to plunge head-on into this conflict," he said. "First, we will be supporting the Syrian army purely in its legitimate fight with terrorist groups. Second, this will be air support without any participation in the ground operations."

Putin also said he expects Assad to talk with the Syrian opposition about a political settlement, but added he was referring to what he described as a "healthy" opposition group.

Putin and other officials have said Russia was providing weapons and training to Assad's army to help it combat the Islamic State. Russian navy transport vessels have been shuttling back and forth for weeks to ferry troops, weapons and supplies to an air base near the coastal city of Latakia.

Worried by the threat of Russian and U.S. jets clashing inadvertently over Syrian skies, Washington agreed to talk to Moscow on how to "de-conflict" their military actions. Last week, Carter had a 50-minute phone call with his Russian counterpart.

Russia followed its launch of airstrikes with a call for the world to unite in the fight against terrorist groups, and Lavrov told foreign ministers of world powers that his country was circulating a draft United Nations Security Council resolution to help make it happen.

Syrian Foreign Minister Walid al-Moallem told the council that his country strongly endorses Russia's latest moves and called French and other airstrikes in Syria that aren't coordinated with his government a "blatant contravention" of international law. Foreign Minister Javad Zarif of Iran, Syria's closest ally, noted that the U.S.-led coalition was "failing to achieve its goals."

Russia spoke a day after Obama made his own pitch on countering the threat of the Islamic State and other groups to a gathering of world leaders at the United Nations.

In September, Russia held the presidency of the Security Council, the U.N.'s most powerful body. Spain will hold the presidency, which follows a scheduled monthly rotation, through October.

Lavrov said Russia is ready to "forge standing channels of communication to ensure a maximally effective fight." He listed countries with a key role to play in resolving the chaos in Syria, including Iran, Russia, Saudi Arabia, Turkey, Egypt, Jordan, Qatar, the U.S. and even China.

"What we require are collective agreed approaches backed by Security Council," Lavrov said.

The foreign minister of France, which began its own airstrikes in Syria a few days ago, told the council that his country is ready to cooperate with Russia and others in the fight against the Islamic State, but under three conditions that include an end to violence against Syria's civilians and Assad's exit.

Laurent Fabius said the collective way forward must include a "broad-based negotiation toward a political transition that doesn't lead to maintaining in power Syria's hangman."

Fabius said another condition for cooperating with other states is having "absolute clarity" about who the countries are fighting.

Frustrated by years of deep divide in the Security Council on Syria, with Russia and China using their veto power to block several proposals, Fabius called the Security Council a "council of impotence." France was heading a meeting Wednesday on its campaign to have the council's five permanent members restrain their use of the veto in cases of mass atrocities. Russia has rejected that idea.

British Foreign Secretary Philip Hammond said his country welcomes Russia's new "focus" on using force but warned it's "very important that Russia be able to confirm that military action it has undertaken this morning" doesn't target Syria's moderate opposition. He urged Russia to use its influence on Syria to make it stop using barrel bombs and chemicals on civilians.

Other U.S. allies were clearly worried by Russia's new moves in Syria, with Italian Foreign Minister Paolo Gentiloni telling the council that Russia's proposal was "a possible step in the right direction" if a political transition were also addressed, but he also told reporters, "There's no rapid military solution to this enormous humanitarian tragedy."