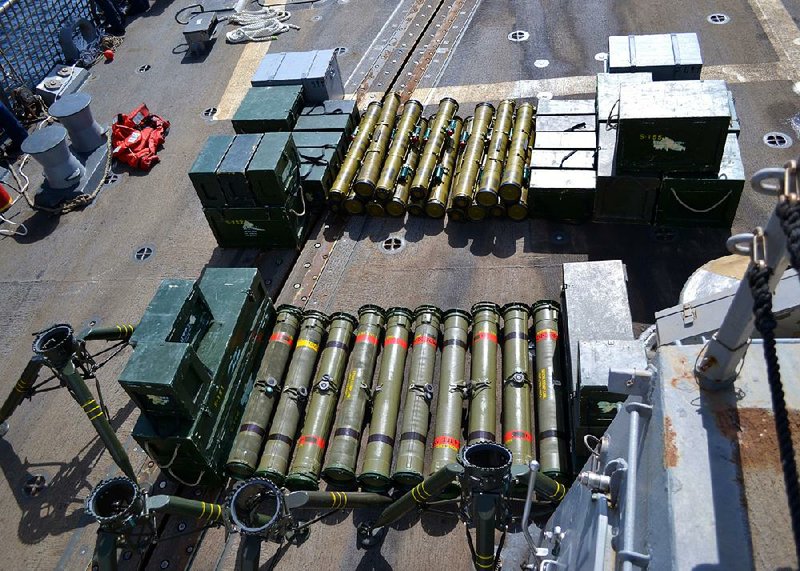 A photo released Wednesday by the U.S. Navy shows on the deck of the USS Forrest Sherman weapons and equipment confi scated from a ship intercepted last week off the Arabian Peninsula.

DUBAI, United Arab Emirates -- A ship carrying illicit arms believed to be from Iran was intercepted last week off the southern Arabian Peninsula by a member of a U.S.-backed naval coalition and was not registered with any country, the U.S. Navy said Wednesday.

The description of the ship's seizure conflicted in some instances with an earlier account provided by a separate Saudi-led coalition battling Yemen's Shiite rebels, which claimed in a statement carried by the state-run Saudi Press Agency that it had foiled the smuggling attempt.

The Saudi coalition alleged that Iran was using the vessel to ship arms to the rebels, which Tehran denied.

The U.S. Navy's 5th Fleet, based in Bahrain, said a member of the Combined Maritime Forces, a long-standing multinational coalition, intercepted the vessel in international waters Friday.

A U.S. guided-missile destroyer, the USS Forrest Sherman, arrived to assist once the weapons were found aboard the dhow, a type of vessel commonly used in the Persian Gulf and Indian Ocean.

A search of the ship determined that it was "stateless," or not formally registered to any country, although it appears to have been traveling from Iran, according to the U.S. Navy.

"Based on statements from the dhow's crew, the port of origin of the dhow and its illicit weapons cache is believed to be Iran," the Navy said, adding that the weapons included anti-tank arms thought to be of Iranian and Russian origin.

The dhow's crew alleged the vessel was bound for Somalia, which sits just across the Gulf of Aden from Yemen. The crew was allowed to depart once the weapons were confiscated, the U.S. said.

Most of the weapons were dumped into the sea, although some were retained for further analysis aboard the American warship.

Earlier in the day, the Saudi-led coalition claimed it had foiled the smuggling effort, which it said happened a day later than in the American account, some 150 miles southeast of the Omani port of Salalah.

When asked about the discrepancy in the accounts, Saudi coalition spokesman Brig. Gen. Ahmed Asiri said the security of Persian Gulf waters is a "cumulative and cooperative" effort. He said the point is not who got to the boat, but that an attempt to illegally smuggle weapons was foiled.

"There's no single country that does everything," he said. "There's cooperation in this area."

He said the vessel was traveling from Iran and that the sailors on board were all Iranian. He said it is possible that the weapons were intended to be rerouted through the Horn of Africa to Yemen or another country.

Saudi Arabia and its coalition allies fear that Iran is actively providing aid to the Yemeni rebels, known as Houthis, as a way to gain a foothold on the Arabian Peninsula. Iran acknowledges providing political support to the rebels but denies arming them directly.

Iran said the situation was under investigation, but it denied shipping arms to Yemen.

"The baseless claim about cargo of the fishing boat and the propaganda, launched by the media being affiliated to the coalition, are a kind of blame game," an unnamed Foreign Ministry official was quoted as saying by the state-run IRNA news agency.

The U.S. has given logistical support to the coalition operating in Yemen. U.S. warships separately take part in the routine Combined Maritime Forces patrols. That coalition includes 30 countries, most of them Western, Arab and Asian allies of the U.S.

Cmdr. Kevin Stephens, a spokesman for the U.S. 5th Fleet, declined to identify the country that made the initial interception but confirmed it was not one of the Persian Gulf nations in the Saudi-led coalition.

Asiri, of the Saudi-led coalition, said the country that let the sailors go should explain why it released them after they were found illegally smuggling weapons. He declined to elaborate further when asked which nation had allowed the 14 crew members aboard the vessel to go free.

According to the Saudi coalition, the ship was carrying 18 pieces of one type of anti-tank missile and 54 of another, as well as launchers and other equipment. Fourteen crew members aboard the ship were arrested, including the captain, identified as Bakhsh Jakal, it said.

The ship was registered to an Iranian named Hogan Mohammed Hout. It was licensed as a fishing vessel and was carrying papers indicating it was checked by port and customs officials in Iran's southeastern Sistan and Baluchistan province, according to the Saudi-led coalition.

Photos released by the Saudi coalition showed a large, traditional wooden dhow with a brown hull and blue-and-white superstructure. The U.S. released photos showing some of the seized arms but not the dhow itself.

Yemen has been embroiled in fighting that pits the Houthis and forces loyal to a former president against the Saudi-backed and internationally recognized government as well as southern separatists, militias and Sunni extremists. The coalition has been carrying out airstrikes against the rebels and their allies since March.

Information for this article was contributed by Aya Batrawy of The Associated Press.