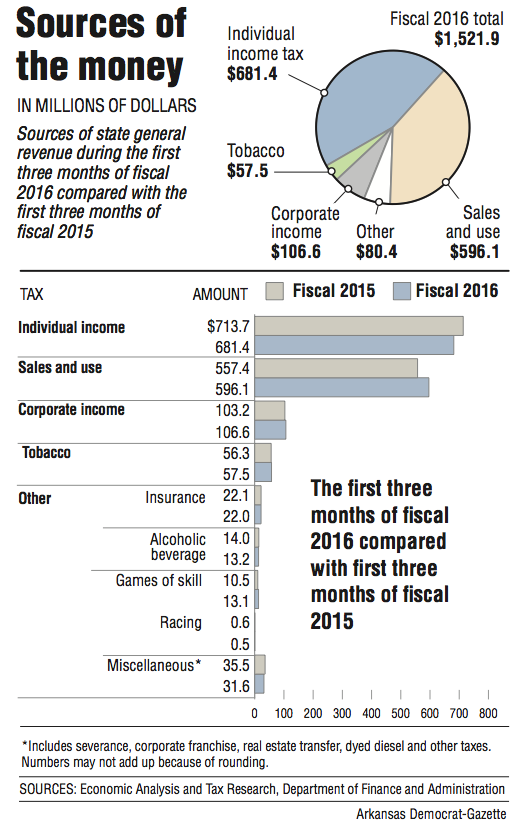 State general revenue in September slipped slightly compared with a year ago but still exceeded the state's forecast.

Last month's collections decreased by $8.4 million, or 1.4 percent, from year-ago figures to $577 million and were $13 million, or 2.3 percent, above the state's projections, the state Department of Finance and Administration said Friday in its monthly revenue report.

The growth in sales and use tax collections exceeded the state's forecast for the sixth consecutive month, while the state's individual tax collections dropped last month from a year ago partly as a result of having one less payday, state officials said.

"It's good momentum for the economy of Arkansas. But we continue to budget cautiously and in a conservative manner," the Republican said in a written statement.

The state's record tax revenue for the month of September is the $590.3 million collected in September 2013, said Whitney McLaughlin, a tax analyst for the finance department.

John Shelnutt, the state's chief economic forecaster, said September's 8 percent increase in sales and use tax collections compared with a year ago was "broad-based" and that the recent stock market downturn didn't appear to be stopping people from spending money.

The state has experienced good job growth, he said.

Arkansas' rate in August was the lowest since July 2008, when it fell to 5.3 percent.

The lowest the unemployment rate has dipped in the past 25 years was 4.2 percent, where it stood for six months from April to September 2000.

During the fiscal year's first three months, state general revenue increased by $8.7 million (0.6 percent) from the same period last year to $1.52 billion and exceeded the state's forecast by $40.7 million (2.7 percent).

Sales and use tax collections increased by $38.8 million (7 percent) from the same three-month period last year to $596.1 million and exceeded the state's forecast by $27.7 million (4.9 percent).

Cuts in individual income tax rates, enacted by the 2013 Legislature, are projected by the finance department to reduce state general revenue by $55 million in fiscal 2016.

State tax refunds and several other government expenditures come off the top of total general revenue, leaving "net" general revenue that agencies are allowed to spend.

"I was pleased with that we are 3.9 percent above forecasts, over projection. This was a great start to the year," Hutchinson said at a news conference at the state Capitol.

Finance department Director Larry Walther said he doesn't expect the state to have similar surpluses in each of the next three quarters or to end fiscal 2016 with a $200 million surplus.

Earlier this year, the Republican-controlled Legislature enacted a $5.18 billion general-revenue budget for fiscal 2016 -- a $127 million increase from 2015 -- as it approved tax cuts projected to reduce state general revenue by $26.5 million in fiscal 2016 and nearly $101 million in 2017.

According to the finance department, September's general revenue included:

Withholdings are the largest category of individual income tax collections. They dropped by $30.6 million from a year ago to $173.8 million, falling $9.9 million short of the forecast.

Last month had one less payday than in the same month in 2014, resulting in a reduction in the state's individual income tax collections, state officials said.

"The results reflect continued growth in underlying economic indicators for consumption and now totals six consecutive months of elevated growth in collections," the department said in its written report.

• A $0.7 million (20.2 percent) increase to $4.4 million in collections from "electronic games of skill" at Oaklawn Park in Hot Springs and Southland Park in West Memphis, exceeding the state's forecast by $0.8 million (21.8 percent).