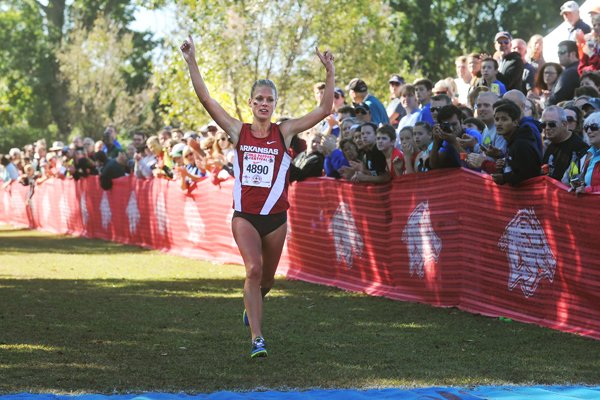 FAYETTEVILLE -- Dominique Scott made her season debut Saturday, but she looked in midseason form as she dominated the women's field at the 27th annual Chile Pepper Festival at the University of Arkansas' Agri Park.

Scott cruised to victory in the 6K race in 16 minutes, 7.18 seconds, which was more than 20 seconds ahead of Arkansas teammate Devin Clark, who finished second.

The 5-5 senior from Capetown, South Africa, acknowledged some anxiety in the season opening race, but she was almost apologetic for running away from the field with a strong first mile.

"You never really know what type of shape you're in until you stand on the start line," Scott said. "So that was good to kind of shake out the cobwebs and straighten out the jersey. It felt good to be on my home course with the home crowd behind us.

"I wasn't expecting to be by myself from the go. I did go out hard, I guess. I ran a 5:05 the first mile, which I guess if I wanted to run more with girls I probably should have run the first mile more conservatively. But the adrenaline and everything obviously gets you going, and I guess that's what carried me through the first mile."

Scott led a strong team performance by Arkansas, which placed five runners among the top eight and easily won the title with 18 points. Abilene Christian finished second with 99 points.

"We just told the kids, 'Hey, we're going to focus on the individuals,' " Arkansas Coach Lance Harter said. "I think that simulation worked well for us. A lot of kids ran huge lifetime bests. Dominique is still a couple weeks behind schedule from where she was last year at this time, but that's our intention."

Harter said the big breakthrough came from Clark, a freshman who finished in 16:28.56.

Arkansas also claimed to the men's team title with 24 points as the Razorbacks finished 3-4-5. Tulsa was second with 60 points, led by junior Marc Scott, who won the men's race in 23:30.9.

"We got a good test from a very good Tulsa team," said Chris Bucknam, Arkansas' men's coach. "The runner that won, he's legit. He's one of the top runners in the country."

Bucknam said he was particularly pleased with Christian Heymsfield, a redshirt junior from nearby Elkins who has been bothered by stress fractures throughout his college career. Heymsfield finished fifth overall and was the third Razorback to cross the finish line.

"It was Christian's second race," Bucknam said. "He only raced maybe two times last year. It's been a project to get him back, but we've always known he's talented. "

In the high school race, a late kick did the trick for Southlake (Texas) Carroll’s Reed Brown.

The top Arkansas finisher was Har-Ber senior Elise Reina, the defending Class 7A cross country champion. She finished eighth in a personal-best 18:36.96.