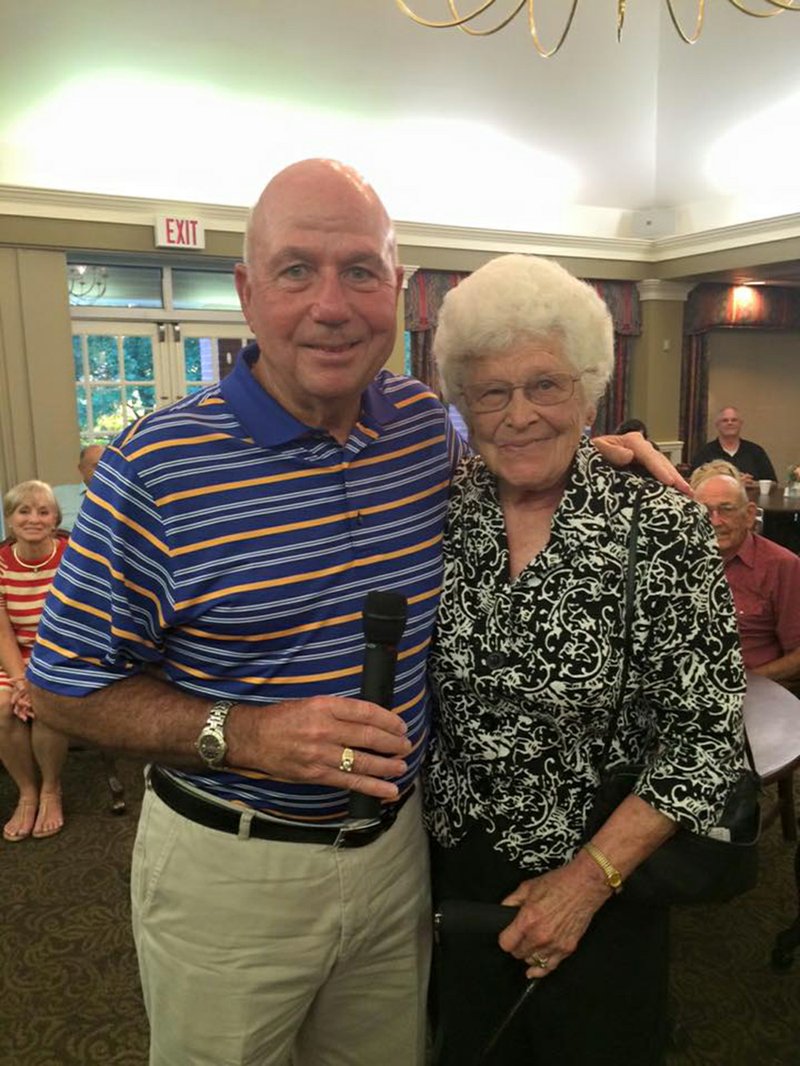 Gary Lay and Jean Steward attended White County Historical Society meeting held near the date of the 50th anniversary of the Titan II missile-silo fire. Steward was a nurse who treated burn victims during the Aug. 9, 1965, accident, and Gary Lay was one of the victims.

The 50th anniversary of a deadly accident that occurred on Aug. 9, 1965, at one of the Titan II missile silos in White County caused many memories to surface for members of the White County Historical Society at a meeting of the group in Searcy earlier this summer.

Not only family members of the 53 men who died deep inside the silo, but doctors and nurses who were on duty at Porter Rodgers Hospital in Searcy during the accident, were reminded of one of the most traumatic days in their lives.

Jean Steward, a registered nurse who lives in Bald Knob, said she remembers the day vividly, and that it was her memories and her husband’s encouragement that resulted in her attending that White County Historical Society meeting, held near the anniversary date of the accident.

Steward said that on the day of the missile-silo accident in 1965, she was set to complete her workday at 3:30 p.m. and planned to return home to her husband and two young daughters around 2 p.m. Her plans were immediately changed by a phone call.

Steward said the caller told her, “Jean, don’t leave. We are about to receive burn victims from a fire at the missile silo! We don’t know how many, but there were 55 men working inside the silo.”

Steward, who worked as a charge nurse on the second floor, was soon counting empty beds and checking to see if any patients could be safely discharged earlier than planned. It was possible that the hospital would receive more burn victims than it had beds.

Drs. Porter Rodgers, Porter Rodgers Jr., Hugh Edwards and Olen Bridges were on duty that day, and Steward said many nurses reported to work as soon as they heard about the accident at the missile silo, located about 12 miles north of Searcy.

At the time, there were 18 silos, described as being like gigantic cradles, holding one Titan II Missile each, buried nine stories deep in the Arkansas countryside. A total of 63 silos holding nuclear-armed weapons weighing 340,000 pounds were located in Arizona, Kansas, California and Arkansas , according to newspaper accounts of the accident.

When the first two burn victims, Gary Wayne Lay, 17, who lived in Clinton and was working to save money for college in the fall, and Hubert A. Saunders, 59, a paint foreman from Conway, arrived at the hospital, they were given immediate, undivided attention by the doctors and nurses who continued to prepare for the possibility of 53 more patients.

“We didn’t know how bad it was until the first two men arrived,” Steward said in an interview this month.

“We had no idea how many more severely burned men we were about to encounter and had serious doubts that we could handle up to 53 additional patients,” she said.

“Gary Lay was only 17, and his hands and arms were very severely burned. We did the best we could for him, and in a few days received additional burn medicine from Lackland Air Force Base in Texas,” Steward said.

“Mr. Saunders, who suffered smoke inhalation, was said to be a cautious man who was well aware of the danger of working inside the silo and usually worked with his gas mask on or near,” she said. “This time, there was no time to grab the mask. The silo became deadly dark, but he said he was able to find a ladder and climbed up to another level.

“Gary Lay said he climbed up, too, and somehow, both men managed to escape.”

It turned out that Lay and Saunders were the only two workers who made it out of the silo and survived the accident, and the only victims from the accident treated that day at the hospital.

An explanation of the cause of the fire states that modifications to the silo were being made when a welding rod pierced a steel-braided hose carrying flammable hydraulic fluid, and a flash caused the power failure. A team of investigators also determined that the 53 men who died in the silo had suffocated, according to newspaper reports.

Zuckert was quoted as saying the bodies of two men who were wedged on a narrow emergency ladder, which had a protective guard around it, may have prevented many men from escaping.

Lay, today an advertising executive in Little Rock, was a guest speaker at a meeting of the Historical Society in July.

Following Lay’s account of his experience inside the silo that day, Steward stood and said, “I was one of your nurses when you arrived at Rodgers Hospital in Searcy. May I see your hands?”

Lay not only showed her his hands; he hugged her as they continued to share memories of that day.

”I can’t believe your hands and arms have healed so well,” Steward said.

Of course, most who listened to Lay’s account of the accident could have added their own memories of that day. Some had personal knowledge of the disaster and/or family and friends who perished. Many lingered after the meeting to discuss personal experiences and thoughts about this scary time in Arkansas’ and the nation’s history.