Bridging 250 years for month of music 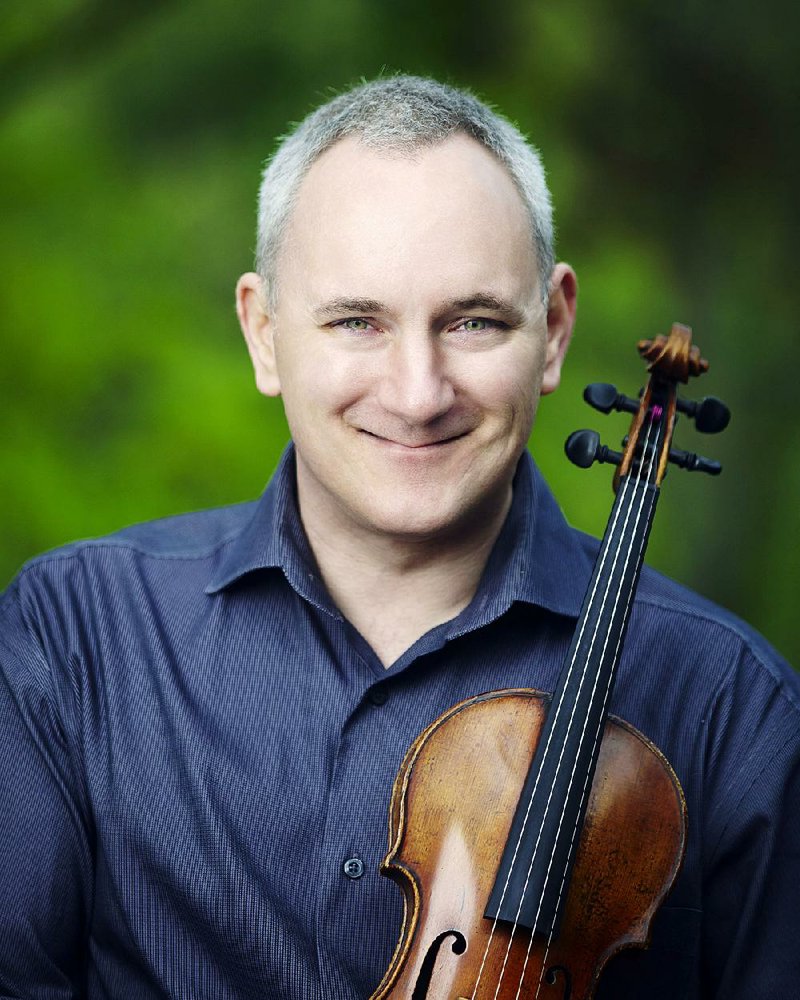 Drew Irvin will be playing his 1765 Nicolo Gagliano violin in concerts and recitals around the state this month.

Drew Irvin is throwing a month-long musical party of sorts for the 250th birthday of his violin.

Irvin, in addition to the concerts he's playing as co-concertmaster of the Arkansas Symphony Orchestra, will play his Nicolo Gagliano instrument, made in 1765 in Naples, Italy, in a series of recitals around the state.

"That program will also include the world premiere of a Caprice for solo violin by Andreas Oeste, a young composer and oboist raised in Arkansas who is currently in Michigan getting his master's [degree] in Ann Arbor," Irvin says. "It is an idea from [Arkansas Symphony Music Director] Philip Mann and a birthday present to my violin."

Irvin bought the Gagliano violin in 2003.

"The most amazing thing for me about my instrument is the work I do with it," he explains. "So many hours are spent with it figuring out the idiosyncrasies and how to do and say what I want musically.

"It is a part of me; on the best of days, a voice that says all I wish to say and sometimes adds a color or sound I didn't know it had or that I had in me."

Violin-making was a Gagliano family business in Naples. According to Tarisio, an auction house for fine and rare stringed instruments and bows with offices in New York and London (tinyurl.com/qc8csjx), Nicolo's father, Alesandro, was reportedly an apprentice alongside Antonio Stradivarius in the Nicola Amati workshop in Cremona in the late 17th century, making instruments that bore Amati's label. Eventually, Stradivarius moved on to his own workshop and it's possible that Alessandro Gagliano worked for him for a number of years.

Nicolo used Stradivarius and Amati violins as models, and some of his instruments have been mistaken for Strads. He is credited, with his brother Gennaro and son Giuseppe, with coming up with a particular harder, slightly green-yellow varnish and use of beechwood for linings.

Irvin won't discuss the price or the value of his violin: "It does make me nervous," he says. "I know with technology and 'Uncle Google' that people can find out what they go for, but I would rather not just say it.

"Many of us string players have to deal with the challenge of finding and affording a professional quality fiddle. When the price gets up there it's tough. I will say I put off buying a house for another decade and instead bought the violin."

("Uncle Google" helped turn up a couple of recent auctions, one in London, one in New York, of Gagliano violins of that era that went for the price of modest houses, not mansions -- between $100,000 and $182,000, and well below the multimillion-dollar price of violins by Guarnerius del Gesu or Stradivarius or mid-six-figure violins by Amati. Which, for many violinists looking for a top-level instrument on a budget, makes it almost a bargain.)

"During the summer I take my violin to the shop of Philadelphia luthier Michael Purcell to get it worked on," Irvin says, and Purcell, while a bit off geographically, describes it this way on his website (tinyurl.com/ohnj45d):

"This is a stunning Nicolo Gagliano from the 1760s. Its a marvel of sculptural power and subtle craftsmanship with a timeless feel of human hands ... both those that made it and those that have used it.

"This violin, though small in size at 35.2 cm [about 14 inches] body length, has great power and clear focus. It is also quite dazzling with its luminous varnish over a shimmering ground. It justly commands the stage at the concertmaster position of a Midwestern orchestra."