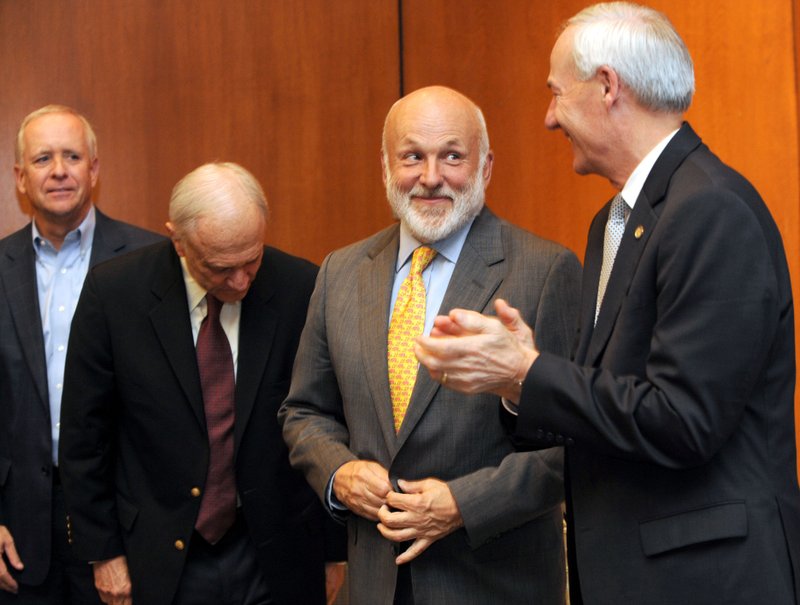 John Tyson, chairman of Tyson Foods, (center) smiles Tuesday with Gov. Asa Hutchinson (right) while standing alongside Marvin Childers, president and chief lobbyist of the Arkansas Poultry Federation, (left), and former Sen. David Pryor during a celebration for the Center for Excellence for Poultry Science’s 20th anniversary and to announce a $1.3 million gift from Tyson Foods on the University of Arkansas campus in Fayetteville.

Tyson Foods gave $1.3 million in matching donations to the University of Arkansas for poultry research and promotion, the company and the university announced Tuesday.

Gov. Asa Hutchinson said at the Center for Excellence for Poultry Science that agriculture is the state's top industry, and the poultry industry is the largest contributor.

"It's a small world, a world that's getting smaller, but we can drive the global marketplace from right here in Arkansas," he said.

Hutchinson, the son of a poultry contract farmer, said he has tried to promote Arkansas agriculture throughout his term. He traveled to Cuba last week in an effort to target the opening market there.

"I grew up understanding that poultry was king," he said.

Two other Arkansas-based poultry companies, George's Inc. and Simmons Foods Inc., gave $100,000 each to the university. The donations will be used to modernize the University of Arkansas System Division of Agriculture's poultry research facilities in northern Fayetteville.

The donation was announced during the celebration of the Center of Excellence for Poultry Science's 20th anniversary.

In the center's first year, 15 students graduated from the Poultry Science Department. The center tripled that number of graduates this year.

Tyson's donation includes $300,000 to renovate the division's Pilot Processing Plant by adding stadium seating and a pilot test kitchen for research. There also is money to improve the facilities at the UA Division of Agriculture's Experiment Station, which has been headquartered in Fayetteville for more than 125 years.

"My simple request to the professors and the students who are the future of this industry is to use it wisely," Tyson Chairman John Tyson said. "But most of all to have a little fun with it."

Gary Murphy, president of Simmons, said the research at the facilities will help the industry tackle issues that are becoming more important to consumers, including animal welfare and reducing the use of antibiotics.

As part of the $1.3 million donation, $200,000 is set aside for a new antibiotic-free research facility. In the last year, Tyson Foods and other large poultry companies have made pledges to reduce the use of antibiotics in their birds.

"This is an extraordinary opportunity to innovate our poultry research facilities in Fayetteville, and we are extremely thankful to Tyson Foods for its continued commitment to poultry research and the future of agriculture in Arkansas," he said.

Another $200,000 will be used to draw young students to study poultry production at the University of Arkansas by building an education center for field trips and summer programs.

"The great Arkansas poultry pioneers envisioned a place where students can learn from the best and learn how to be the best, in what is now one of the largest teaching and research facilities on this campus," Tyson said. "The poultry science program at the University of Arkansas wouldn't be what it is today without the commitment of the University of Arkansas, the faculty who've spent countless hours introducing new opportunities and challenges for their students, and the myriad of folks in the industry and community."

Dan Ferritor, interim chancellor of the University of Arkansas, said the poultry industry is worth about $10 billion in Arkansas.

"We have the vision that we're going to take this program and it's going to turn into a national and international program," he said. "I believe it is the No. 1 poultry research center in the country."