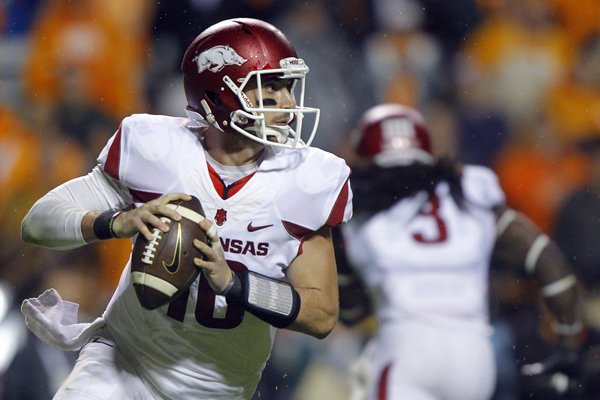 Arkansas quarterback Brandon Allen (10) looks for a receiver during the first half of an NCAA college football game against Tennessee Saturday, Oct. 3, 2015, in Knoxville, Tenn. (AP Photo/Wade Payne)

FAYETTEVILLE -- After Arkansas rushed for 103 yards in a loss to Toledo, Coach Bret Bielema held a summit to review the team's offensive plan.

For an Arkansas offense that built its reputation on a punishing ground game, its average of 3.3 yards per carry against the Rockets wasn't cutting it.

"We all talked," Arkansas offensive coordinator Dan Enos said. "It was like, we've got to run the football. That's our formula. ... I really think we kind of dove into our formula of what we need to be successful.

"The last three weeks I think we've been able to find pretty decent balance within the offense, but I'll say it again. It all starts with the run game."

The Razorbacks know they'll have to establish some semblance of a run game against the SEC's toughest run defense to have a chance of upsetting No. 8 Alabama on Saturday in Tuscaloosa, Ala.

After piling up 735 rushing yards in the past three games, the Razorbacks achieved a unique statistical plateau that speaks to their balance.

"Their offense is difficult to defend," Alabama Coach Nick Saban said. "A good combination of run and play-action passes and a good drop-back game, and they've done a really good job with the players that they have."

Senior guard Sebastian Tretola said rediscovering their identity was paramount for the offense.

"We've just got our swagger back," Tretola said. "We've got our physicality, our mentality back. This is what we're coached to do. From Day One when Coach B got here, this is what he's preached. He wants a big, mean offensive line that plays fast, smart and physical.

"Just getting back to that was the biggest thing."

"I think our O-line is coming off the ball a lot better," Bielema said. "We got maybe a little bit too much east and west. We're definitely coming off the football on combo [blocks] and getting up to the second level. We're moving people at the line of scrimmage a little bit better."

The Razorbacks' 24-20 victory over Tennessee last week contained many of the identifying marks of the ideal Bielema outing. That is, if you discount the kicking game antics, which led to Tennessee's 96-yard kickoff return touchdown and wiped out two scoring opportunities for the Razorbacks in the second half that might have iced the game.

Bielema believes in being able to run and stop the run, controlling the tempo with a hefty time-of-possession margin, winning critical downs on critical areas of the field, and playing clean football with limited mistakes and turnovers.

Check marks abound in those areas from Arkansas' victory over the Volunteers.

Arkansas ran for 141 yards in the second half while the Vols managed 4 yards.

"That was the definition of why the game was won, in my opinion," Bielema said. "I think you probably saw their reaction. I love it when you're playing teams and you begin to watch their players start reacting to their other teammates, and some of that wasn't positive. Once you get that mojo going, it's fun to watch."

While Arkansas had its red-zone struggles on offense, its defense allowed Tennessee only one touchdown on four red zone trips.

"You've got to have stops in the red zone and get off the field on third down, and I think they were 1 for 4 in the red zone on scoring touchdowns," Arkansas defensive coordinator Robb Smith said. "That helped us accomplish our goal, and a lot of times when you can accomplish your goals in those critical areas they lead to wins."

Arkansas did not commit a turnover against Tennessee, the Hogs' second turnover-free game of the season, and forced one from the Vols. The Razorbacks, plagued by holding calls in their consecutive losses to Toledo, Texas Tech and Texas A&M, also had their lowest penalty count of the season with three flags for 20 yards on a pair of delay of games and one illegal block.

"If we can play clean and fast like we did last week, we can be a pretty good O-line," Arkansas line coach Sam Pittman said.

Allen said Alabama makes so few mistakes on defense that precise execution will be a must Saturday.

"We have to do things well, that's run the ball, establish a good run game and be able to play-action and complete passes against them," he said. "Basically just be balanced on our offensive side and move the ball and not hurt ourselves."