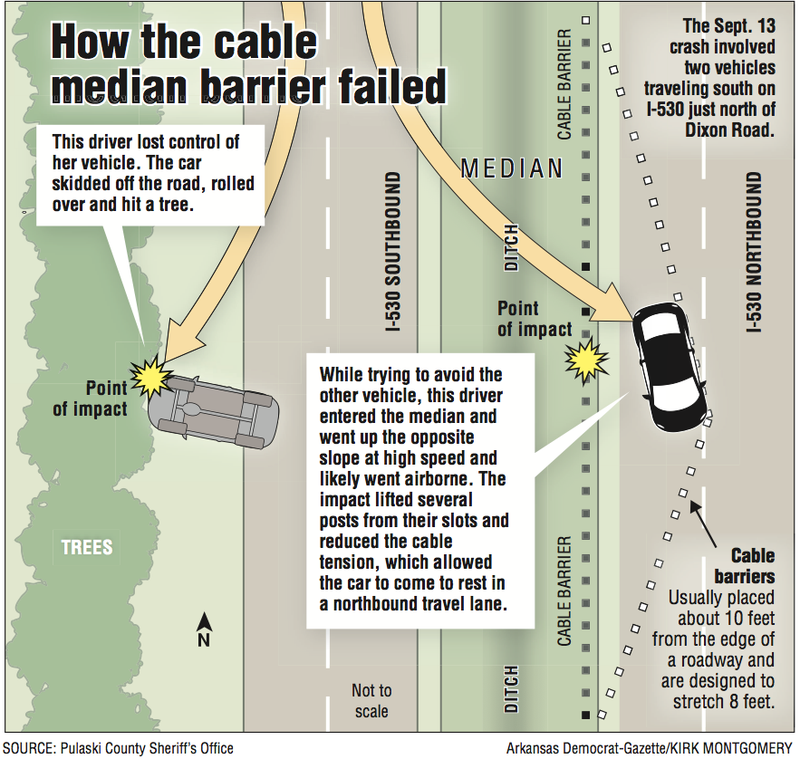 Excessive speed likely was a factor in the failure of a cable median barrier on Interstate 530 last month, and no design changes are warranted in the safety devices, state highway officials have concluded.

The cable median barrier in the Sept. 13 traffic accident halted a vehicle as designed but stretched, allowing the vehicle to enter an oncoming lane of traffic. The barriers are designed to prevent crossover crashes.

There were no vehicles in that oncoming lane at the time because an unrelated crash south of the site had temporarily halted northbound traffic.

An Arkansas Highway and Transportation Department review found that the vehicle that hit the barrier likely was speeding.

The speed limit in that section of interstate is 70 mph.

The contractor whose company installed the median barrier said what he saw at the scene of the crash after the vehicle had been removed, suggested that the vehicle was airborne when it struck the barrier. The crash uprooted 10-15 posts, which released the tension in the cables, he said.

"There were no skid marks ... up the slope" leading to the backside of the barrier, which is near the northbound lanes, said Spencer Stillman of Time Striping Inc. of Van Buren. "When you pull up the posts, you reduce the tension. It allowed the cable to give substantially because the tension was gone out at that time."

Stillman said the design and engineering of the cable median barriers are based on the assumption that vehicles are traveling at no more than 70 mph.

Highway Department officials said the Sept. 13 crash is the first instance that they are aware of that the barriers didn't work as designed. To date, the barriers have been installed along almost 700 miles of Arkansas interstates and major U.S. highways, where the department has determined that they are warranted.

Cable median barriers are high-tension, fencelike structures that have steel wires attached to lightweight posts. According to the Federal Highway Administration, they are designed to "deflect laterally to absorb energy and reduce the impact on vehicle occupants."

The cable median barrier along the stretch of I-530 north of Dixon Road had been recently installed, according to Straessle. Its installation was considered complete, he said.

The contractor had "tensioned," or tightened, the cables on Aug. 4, Straessle said. As part of the protocol to finish the project, the contractor "re-tensioned" the cables 28 days later, on Sept. 1.

Barriers are typically placed about 10 feet from the edge of a roadway and are designed to stretch 8 feet, he said.

The cables in this instance stretched beyond the designed limits.

The department has pushed for installation of the cable barriers, saying they are a cost-effective way of preventing head-on, often fatal, highway collisions.

The state Highway Department has conducted studies to gauge the barriers' effectiveness.

One study of an 8.5-mile section of Interstate 40 in Prairie and Monroe counties showed that the cable median barriers had been effective in preventing fatal crashes there.

Crashes with injuries decreased from 47 before the installation to 28 after, according to a summary of the analysis.

But the barriers are designed only to reduce the likelihood of crossover crashes, not to eliminate them, Straessle said.

"The cable median barriers are designed to mitigate the potential for a crossover [crash]," he said. "Nothing's 100 percent."

The Sept. 13 crash occurred early in the morning and involved two vehicles traveling south on I-530 just north of Dixon Road, according to Straessle.

One of the vehicles, a 2015 Toyota Avalon, ran off the left shoulder of the interstate and into the barrier, according to a Pulaski County sheriff's office report.

The other, a 2015 Infiniti G35, went off the right shoulder, turned sideways and rolled over, then struck a tree before coming to rest upside down.

The driver of the Avalon suffered nonincapacitating injuries, while the Infiniti driver's injuries were incapacitating, according to the report.

The report listed "careless prohibited driving" as a factor in the crash.

That crash was unrelated to the earlier one on I-530 south of Dixon Road on the same morning, in which three people were killed in a wrong-way, head-on collision.