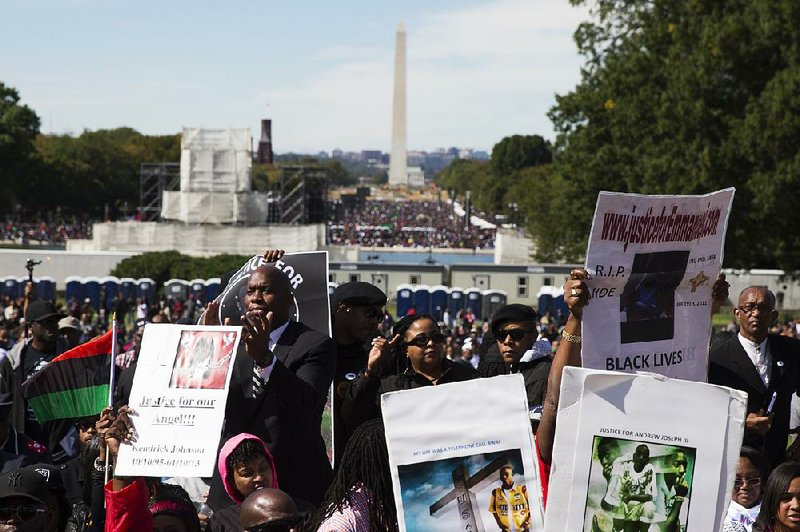 People cheer Saturday during a rally in Washington to mark the 20th anniversary of the Million Man March.

WASHINGTON -- Black men and women joyously returned to the National Mall on Saturday for the 20th anniversary of the Million Man March, calling for changes in policing and in black communities amid an atmosphere that felt like a family reunion.

Photo by MARK WILSON / AP
In this Oct. 16, 1995, file photo, participants in the Million Man March gather on Capitol Hill and the National Mall in Washington.

Waving flags, carrying signs, and listening to speeches and songs, people mingled and weaved around security barricades, loudspeakers and souvenir vendors on the sunny, breezy day.

For some, it was a return to Washington after the Million Man March of Oct. 16, 1995, and a chance to introduce their children to the same positive energy that they experienced in the first march.

"This is a very special moment for me. Twenty years ago, I was by myself," said Joey Davis, 47, of Detroit, who set up chairs Saturday for his family members near the Capitol's reflecting pool. "And 20 years later, I come back with my wife and five children. And so I like to think that over the last 20 years I've been doing my part in keeping the promise of the spirit of the original Million Man March."

Nation of Islam leader Louis Farrakhan, who spearheaded the original march, called the anniversary gathering the "Justice or Else" march. Many speakers through the day Saturday asked the crowd to chant that slogan.

Farrakhan, in a speech that lasted more than two hours, called for the black community to take more responsibility for inner-city killings and for the government to investigate recent high-profile killings of unarmed black men and women.

"There must come a time when we say enough is enough," the 82-year-old Farrakhan said.

More attention has been focused on the deaths of unarmed black men since the shootings of 17-year-old Trayvon Martin in 2012 in Florida and 18-year-old Michael Brown in 2014 in Ferguson, Mo. Deaths of unarmed black men and youths at the hands of law enforcement officers have inspired protests under the "Black Lives Matter" slogan around the nation.

Members of those families and relatives of Sandra Bland, a black woman found hanged in a Texas jail after she was arrested in a traffic stop, spoke from the main stage.

Tamika Mallory, a national organizer of the rally, noted other young black men killed by police in recent years, including Tamir Rice of Cleveland and Eric Garner of Staten Island.

"Twenty years ago, the death of Tamir Rice would have fallen on deaf ears and [been] left for the police to write a false report, not broadcast for the world to know," Mallory told the crowd. "Michael Brown's body would have only traumatized the community, rather than wake up the people."

"America, we can't breathe," Mallory said, echoing the phrase that Garner uttered while being held in a chokehold by police in July 2014.

The original march attracted hundreds of thousands to Washington to pledge to improve their lives, their families and their communities. Women, whites and members of nonblack minority groups were not invited to the original march, but organizers welcomed all Saturday.

President Barack Obama, who attended the first Million Man March, was in California on Saturday.

Saturday's march attracted young and old, including some veterans of the 1963 civil-rights March on Washington. Nate Smith of Oakland, Calif., was on hand to hear Martin Luther King Jr.'s "I Have A Dream" speech. He also attended the 1995 Million Man March and returned for Saturday's event.

"It's something that I need to do," the 70-year-old man said. "It's like a pilgrimage for me, and something I think all black people need to do."

Rev. Jamal Bryant of the Empowerment Temple AME Church in Baltimore, who helped organize the anniversary march, estimated the crowd Saturday at 1 million. Independent estimates on the crowd's size were not available.

In some ways, officials said, the lives of black men since the original march have improved, but not in others. For example:

• The unemployment rate for black men in October 1995 was 8.1 percent, according to the Bureau of Labor Statistics. In September 2015, it was 8.9 percent.

Information for this article was contributed by Jesse J. Holland of The Associated Press; and by David Nakamura, Hamil R. Harris and Michael Laris of The Washington Post.