All Hogs need for bowl is 4-0 home finish 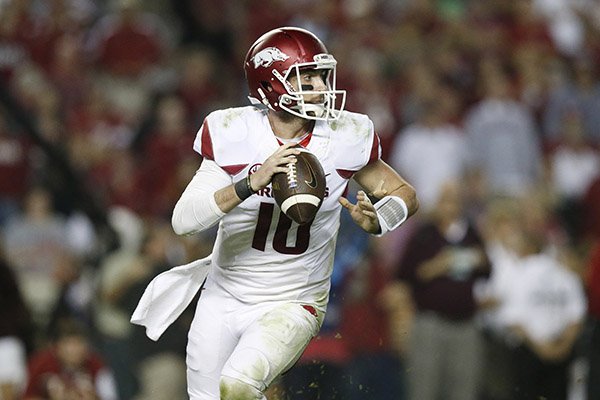 Arkansas quarterback Brandon Allen (10) sets back to pass the ball in the second half of an NCAA college football game, Saturday, Oct. 10, 2015, in Tuscaloosa, Ala. Alabama won 27-14.(AP Photo/Brynn Anderson)

A year ago, the Arkansas Razorbacks were coming off a 14-13 home loss to Alabama at the halfway mark of the season and were 3-3.

Granted, that doesn't shout improvement. But it does indicate if you are a gambler, take Arkansas and the points.

OK, there are some similarities in how this season is going and and the first half of the season a year ago.

The Razorbacks are improving, especially on defense, each week. In the future, they might want to start better and improve.

How many more football games will Arkansas win?

Some Hogs fans are grousing about quarterback Brandon Allen, which seems to have become a constant gripe. But no one player deserves all the fault or credit for a team sport.

The Razorbacks should be 4-2 and going into an off weekend with some peace of mind, but they found a way to score only 10 points against Toledo (they also had a safety that the Rockets took on purpose) and should have beaten Texas A&M.

So instead of a little down time, Bret Bielema and his staff are hitting the road, scouting for players.

They are looking for help at specific spots and only they know if quarterback is one of those. They have four quarterbacks on scholarship, not counting Brandon Allen, which is a lot.

Needless to say the two who had a shot at beating out Allen -- Austin Allen and Rafe Peavey -- could not. Ty Storey was always going to be redshirted and transfer Ricky Town is a mystery.

Town, 6-4, 210 pounds, is a pro-style quarterback who started his college career at Southern Cal. A four-star quarterback, he was part of the Trojans' No. 1-ranked recruiting class.

The Hogs obviously need some depth at some positions. Dre Greenlaw is becoming a better linebacker every week, but this time last year he was a safety for Fayetteville High.

What they seem to need more than anything is overall team speed.

Dominique Reed showed the type of speed, and power, the Hogs need in skill players and defensive backs last Saturday against Alabama. His 54-yard touchdown play started with speed and his desire got him into the end zone with several defenders on his back. Receiver Drew Morgan gets an assist by giving Reed some much-needed pushing.

Incidentally, the Hogs had 146 yards of total offense until that five-play, 74-yard drive. They had 10 possessions where they ran four plays or less.

That kept the Hogs defense on the field too much and had as much to do with what happened with 1:50 to play in the third quarter and the final period as anything.

It is good to be big, but speed and athleticism count, too.

The Hogs are 2-4 and have painted themselves into something of a corner when it comes to postseason bowls. They need to win four of their final six, and yes, four of those games are at home.

The second half starts with home games against Auburn on Oct. 24 and Tennessee-Martin on Halloween (Nick Saban's birthday), followed by road games at Ole Miss and LSU. The Hogs finish at home with Mississippi State and Missouri.

In other words, if they defend their back yard, they will be in a bowl somewhere, probably Birmingham. But any bowl gets a team extra practices and helps in recruiting.

Last year, the Hogs had to finish strong with shutouts over Ole Miss and LSU to get bowl eligible. This year, all they need to do is win their four home games. Anything else would by icing on the cake.

Print Headline: All Hogs need for bowl is 4-0 home finish