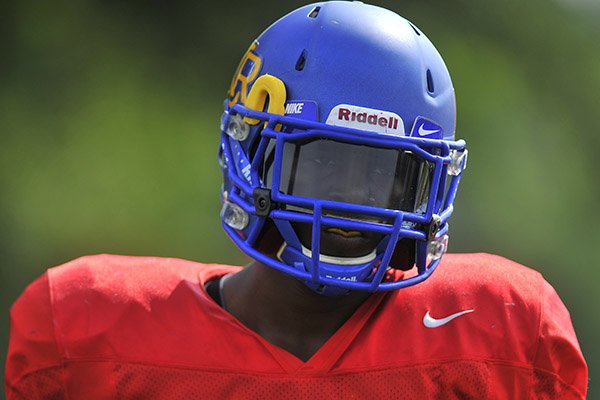 North Little Rock running back Juan Day works out during a team camp at Camp Robinson on July 29, 2013.

FAYETTEVILLE — For the first time this season, Juan Day scrimmaged with the Razorbacks on Wednesday.

The redshirt freshman running back is less than seven months removed from a surgery to repair a torn ACL. It was the second time in 18 months Day had suffered the injury and he hasn't played in a real game since his senior season at North Little Rock High School in September 2013.

"I'm just happy for Juan to be able to go out and compete," receivers coach Michael Smith said. "I thought he ran the ball hard when he got in there. He's a good talent that we have to get to stay healthy."

During Arkansas' developmental scrimmage at Razorback Stadium, Day took hits for the first time since he was sidelined in March. The practice was closed to media.

Despite having knee surgery twice in such short a short time period, quarterback Brandon Allen said he couldn't tell Day had been injured.

"He was running around, didn't really favor that knee at all," Allen said. "He was taking some hits out there and popping right back up, so he looked pretty healthy."

One play in particular told safety Rohan Gaines that Day was back to his former self.

"He got the ball and made a nice little jump cut in the hole early on in the scrimmage and it really impressed me," Gaines said. "Obviously he just came off a knee injury and to come back (like that) as fast as he did, that's awesome."

The Razorbacks could use an extra body in the backfield. Arkansas is down one runner after Jonathan Williams broke his foot in the preseason, and Kody Walker hasn't played in three weeks with a broken hand.

Despite the injuries, Arkansas is averaging 177 yards per game rushing and junior Alex Collins is the SEC's third-leading rusher.

Freshman Rawleigh Williams has 236 yards and one touchdown, and rushed for 100 yards in a win at Tennessee.

Arkansas Coach Bret Bielema said Tuesday he was unsure if Day would return this season, adding he wanted to see how Day reacted to contact before jumping to any conclusions. Day may be able to gain an additional year of eligibility from the NCAA if he doesn't play this year.

"If push came to shove, I think (running backs coach) Jemal (Singleton) would feel comfortable putting (Day) in the game," Smith said. "That's something that the training staff, Coach Bielema and Coach Singleton will talk about, but he looked good today."