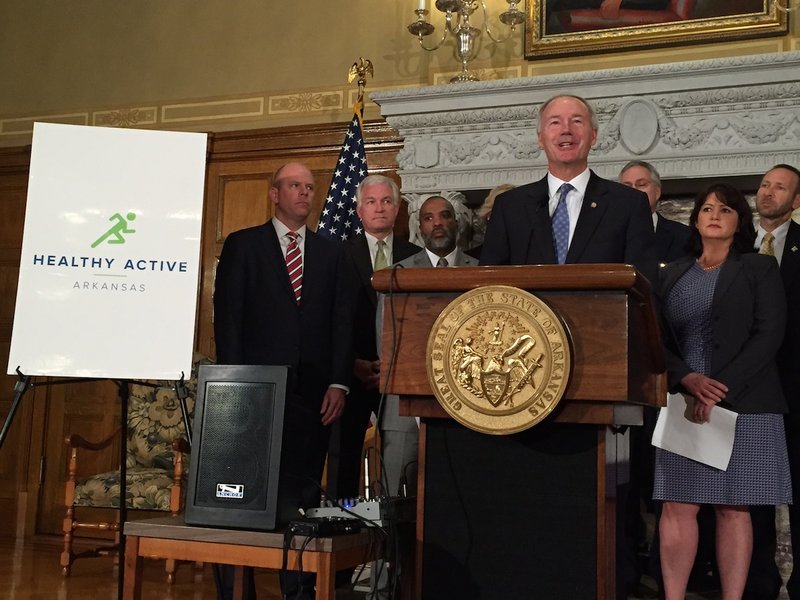 Gov Asa Hutchinson, surrounded by leaders behind a 10-year plan to curb the state's obesity rate, announces the Healthy Active Arkansas initiative during a news conference at the state Capitol on Wednesday, Oct. 14, 2015.

Gov. Asa Hutchinson, the state's surgeon general and health care leaders unveiled a 10-year plan Wednesday at the state Capitol to take steps toward a healthier Arkansas, including lowering the obesity rate.

"Whenever you look at the fact that 40 percent of health care costs on obesity-related illnesses are public dollars that are spent, that's expensive," Hutchinson said, adding that the 50-page Healthy Active Arkansas plan isn't intended to "stigmatize any element of our society."

Arkansas has the highest rate of obesity among adults in the U.S. at 35.9 percent, according to a report released in September by the Trust for America's Health and the Robert Wood Johnson Foundation.

According to research presented in the Healthy Active Arkansas plan, nearly 760,000 adults in Arkansas are considered obese.

The nine-part initiative details healthier living goals that take into account multiple facets of planning and oversight in the private and public sectors. Those include increased mobility, nutritional standards, physical education and access to healthy foods across all age groups.

Hutchinson said the plan "should save money" in the state and that the objective in part is to reduce taxpayer costs.

The governor said tax credits are not being considered as part of the plan.

"I'm not one for government mandates, but I am for incentives, and I am for providing leadership," he said. "We're not going to tell business what to do. We're going to encourage them and lead by example."

Asked after the news conference about any comparison with former Gov. Mike Huckabee's health initiatives during his term, Hutchinson said his plan offers a different approach and comes at a time when health statistics show a different outlook for the state.

Surgeon General Dr. Greg Bledsoe said the Healthy Active Arkansas plan is marketed in a way that allows it to "culturally" and "appropriately" address health issues of Arkansans from different backgrounds.