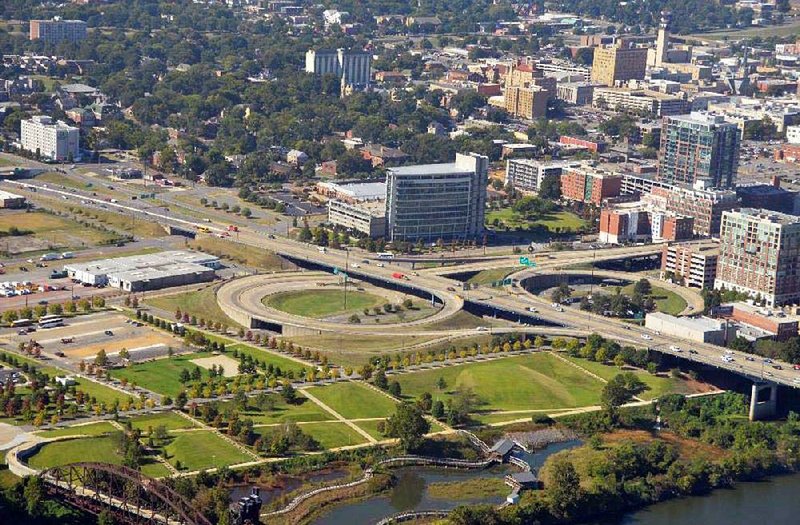 The Interstate 30 interchange in downtown Little Rock is shown in its present configuration .

The latest plan to increase pedestrian safety as part of an estimated $600 million project to widen the Interstate 30 corridor through downtown Little Rock and North Little Rock will cost the downtown streetcar system a major route if the plan survives a vetting. 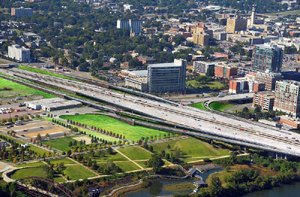 Photo by Special to the Democrat-Gazette
An artist rendering of the Interstate 30 interchange and how it would look after a proposed widening into North Little Rock in a project that would curtail the streetcar route east of the interstate in Little Rock. 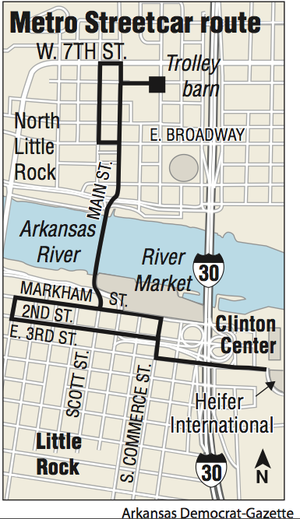 The proposed configuration of the key interchange on I-30 serving downtown Little Rock cannot accommodate the Metro Streetcar system on the east side of the interstate serving the Clinton Presidential Center and Heifer International, said Ben Browning, design-build project manager for the Arkansas Highway and Transportation Department.

Options moving forward include relocating the streetcar line east of I-30, modifying plans for the interchange again to accommodate the line or removing the line, Browning said. If the route is removed -- as highway officials prefer so far -- the Federal Transit Administration funds spent on the project would have to be repaid, he said.

"That's the discussion," Browning said. "It's not set in stone."

The department hasn't calculated the amount it might have to repay under that scenario. But an Arkansas Democrat-Gazette article from 2005, when the Central Arkansas Transit Authority received the greater part of the funds, reported that the federal contribution toward the route was $7.1 million.

"It's a significant public investment," said Jarod Varner, the executive director of Rock Region Metro, the agency formerly known as the Central Arkansas Transit Authority that oversees the streetcar system. "We are having an ongoing dialogue. I hope they came up with another alternative."

The line on the chopping block is a key route for the trolley cars, especially on weekends, when many users get on and off near the Clinton library.

"From a customer perspective, it's critical," Varner said.

"We are currently evaluating the various options to determine any impact they may have to the Clinton center and the Clinton Presidential Park," said Stephanie Streett, the executive director of the Clinton Foundation, which oversees the library operations.

"Ultimately, the Clinton Foundation will support whichever option is the most beneficial to the overall downtown area and city."

At issue is increased traffic that the interchange would funnel to LaHarpe Boulevard, West Second Street and President Clinton Avenue in downtown Little Rock as part of the I-30 improvements, which include widening the interstate at some points to 10 lanes, as well as replacing the bridge over the Arkansas River.

The city of Little Rock, among others, opposed an earlier plan that would have increased traffic with no improvements at LaHarpe Boulevard/Cumberland Street and its intersection with President Clinton Avenue/East Markham Street. And state officials pointed out that any improvements at that location would have to be provided by an entity such as the city.

The intersection is a major part of the downtown River Market entertainment district on the river. It is home to restaurants and bars, as well as apartments, hotels and other nearby venues such as the Historic Arkansas Museum, all of which generate pedestrian traffic.

An analysis of pedestrian and bicycle crashes in central Arkansas that Metroplan, a planning organization for central Arkansas governments, released in 2012 found the intersection to have the highest number of crashes over a 10-year period involving pedestrians in the metropolitan area, which includes Pulaski, Saline, Faulkner and Lonoke counties.

Commuter traffic coming off I-30 to points west goes through the intersection and onto LaHarpe Boulevard and Arkansas 10 heavily in the morning, and traffic accesses the interstate there again heavily in the evening.

The latest proposal would channel the traffic coming off I-30 down West Second, which would be widened to three lanes. That also triggered worry among transit officials.

"We have serious concerns about operating a low-speed streetcar on what would be a state highway," Varner said.

The proposed interchange will be among a host of changes that will be presented at a public meeting on Oct. 22. The meeting will be held from 4 p.m. to 7 p.m. in the gym of the Friendly Chapel Church of the Nazarene at 116 S. Pine St. in North Little Rock.

The meeting is styled as an "open house" and features no formal presentations. The public is invited to visit during the scheduled hours to view maps and exhibits, ask questions and offer comments about the proposed project, which has been dubbed "30 Crossing."

The Oct. 22 meeting is part of an environmental review phase of the project that requires engineers to further evaluate the initial recommendation and an alternative, which would limit the widening of I-30 to eight lanes.

The meeting will be the first for the public since engineers working to ease congestion through the corridor completed and won federal approval of the project's planning and environmental linkages study. That study recommended the corridor be widened from four lanes to 10 lanes.

Two of the new lanes in each direction would be limited to the immediate vicinity of both downtowns with a barrier separating them from the main lanes. The speeds also would be slower to allow safer collection and distribution of traffic entering and exiting the corridor.

The environmental review also encompasses recommendations for interchange designs and the locations of ramps and interchanges, along with their potential impact to businesses and other interests within the corridor.

Both the corridor and the bridge, which carry 125,000 vehicles daily, were built 50 years ago.

The project is part of the department's $1.8 billion Connecting Arkansas Program, which is financed in part by a statewide 0.5 percent increase in the statewide sales tax voters approved in 2012. More information about the project can be found at connectingarkansasprogram.com.