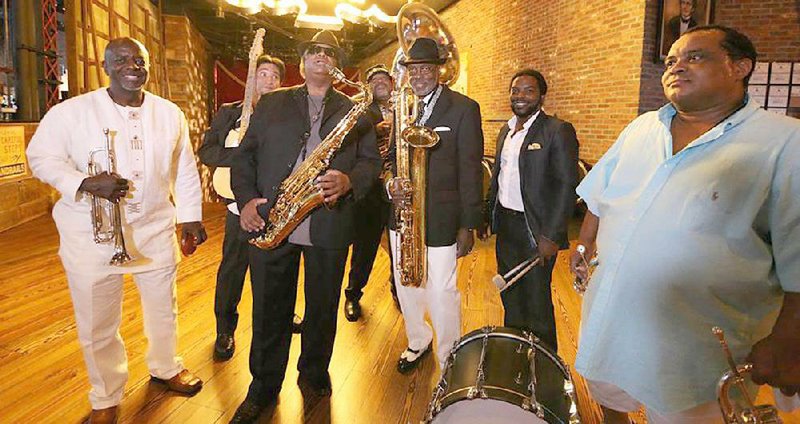 New Orleans' famed Dirty Dozen Brass Band will headline Saturday and Rusted Root will open the show at 8 p.m. Tickets are $20 in advance, $25 the day of the show.

The Dirty Dozen Brass Band, formed in 1977, has recorded with Elvis Costello, Widespread Panic and Modest Mouse and has released 14 albums, the most recent of which was Twenty Dozen in 2012.

Rusted Root, a band that was formed in Pittsburgh in 1992, performed in Little Rock's Barton Coliseum in 1998 as the opening act for the reunion tour of Robert Plant and Jimmy Page. The group, which recently released its eighth album, The Movement, has also toured with the Grateful Dead, Santana, The Allman Brothers Band and The Dave Matthews Band.

Warren G will perform at 9 p.m. today at Juanita's. The Long Beach, Calif., rapper began his career in 1992 and became well known two years later when he collaborated with Nate Dogg. Admission is $25.

Birdcloud will perform at 10 p.m. Saturday. Tickets are $5 in advance or $8 the day of the show.

Birdcloud is a female punk rock duo, Jasmin Kaset and Makenzie Green, who met as students at Middle Tennessee State University in Murfreesboro. They first became known for their song "Saving Myself for Jesus."

MC Lars will perform Friday at Stickyz Rock 'n' Roll Chicken Shack and the 9:30 p.m. show will open with a set by Koo Koo Kangaroo. Tickets are $10 in advance, $12 the day of the show.

MC Lars, a Stanford graduate, does a style of rap he calls "post punk laptop rap," and samples Iggy Pop, Fugazi and Supergrass, and has also used lyrics from Shakespeare and Edgar Allan Poe. He has released 10 albums since 1999, the latest, The Zombie Dinosaur LP, earlier this year.

Amy LaVere and Will Sexton will perform at 9:30 p.m. today at the White Water Tavern. Admission is $7.

"Girls That Rock" will perform at 9:30 p.m. Friday in a benefit for community radio station KABF-FM, 88.3; featured bands will include Spero, Ghost Bones and Bad Match. Admission is a donation of $5.

A benefit for the Central Arkansas New Agrarian Society will be held at 10 p.m. Saturday. Admission is $5.

The Hi-Balls will perform from 9 p.m. to midnight Friday at Another Round Pub. Admission is $5.

Shannon Boshears will play from 9 to midnight Saturday. Admission is $5.

Way Down Wanderers, a Chicago Americana band, will perform a free 9 p.m. show today at Maxine's in Hot Springs.

Falco, a native of Gurdon, now lives in Vienna but occasionally returns to his home state. Watt, a bassist and singer-songwriter, was one of the founders of the rock bands Minutemen in 1980 and Firehose in 1986, along with a plethora of later bands and solo projects.

The Foul Play Cabaret burlesque show will be held at 9 p.m. Saturday. Admission is $10.