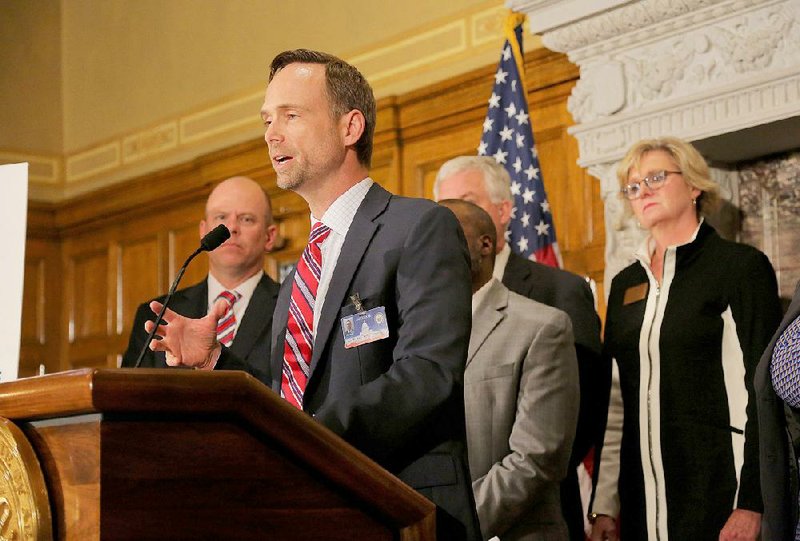 Saying it will help improve Arkansas' economy, Gov. Asa Hutchinson on Wednesday announced his support for a 10-year plan aimed at reducing the state's obesity rate.

Priorities for a healthier Arkansas

Hutchinson spoke less than a month after a report by the Trust for America's Health and the Robert Wood Johnson Foundation found Arkansas to have the highest adult obesity rate in the nation.

The report found that 35.9 percent of Arkansans were considered obese in 2014, compared with 34.6 percent in 2013. The report was based on phone surveys conducted last year by state health departments.

"It's an important issue to me because an unhealthy Arkansas is an expensive habit for the taxpayers," Hutchinson said.

He implied that health hadn't been a priority of his Democratic predecessor, Gov. Mike Beebe.

"There's a gap," Hutchinson, a Republican who took office in January, said at a news conference at the state Capitol. "You look back over recent years, I think this has been missing."

Matt DeCample, who was Beebe's spokesman, responded that Beebe had a comprehensive focus on improving the state's health.

That included raising the state's tax on cigarettes in 2009 to pay for a statewide trauma system and a variety of other health programs.

"Was there an initiative specifically on that one piece of health care [obesity]? No, that was part of some much bigger efforts," DeCample said.

In supporting the Healthy Active Arkansas plan, Hutchinson said that having a healthier workforce can help attract businesses to the state and lower health care costs for businesses.

Meanwhile, Arkansans can improve their lives by taking better care of their health, he said.

"Arkansans sometimes have bad habits through tradition or just not understanding what needs to be done or not having the ability to have an annual checkup, but they want to have a healthy lifestyle," Hutchinson said. "We need to provide the means, encouragement, the leadership, so that they can have the quality of life that they each desire."

The state Department of Health will assign a "senior staff member," who has yet to be identified, to implement the plan, spokesman Kerry Krell said.

According to materials distributed at the news conference, the effort will be guided by a nine-member "leadership consortium" led by state Surgeon General Greg Bledsoe.

Implementing the recommendations will not cost the state any money and should save money by reducing health care costs, Hutchinson said.

In 2004, then-Gov. Mike Huckabee, now a candidate for the Republican nomination for president, announced the Healthy Arkansas campaign and challenged the state's Health Department to reduce the adult obesity rate from 24 percent to 15 percent by January 2007.

But the rate kept increasing, reaching an average of 27 percent from 2004-06, when Arkansas ranked No. 8 in its percentage of obese adults.

A person's height and weight are used to calculate a "body mass index" that determines whether a person is obese.

Those efforts have been credited with keeping the state's childhood obesity rate in check.

According to the Arkansas Center for Health Improvement, about 21 percent of Arkansas schoolchildren measured in the 2013-14 school year were considered obese, the same percentage as in the 2003-04 school year.

The latest plan was compiled from the recommendations issued in December 2013 at a conference of public health officials, researchers and others, organized by the University of Arkansas System's Winthrop Rockefeller Institute.

Conference participants and others met a second time this summer to discuss the plan's implementation, Loyd said.

That conference led to the group seeking Hutchinson's endorsement and help in publicly announcing the plan, she said.

The group's report was originally called the "obesity plan," she said, but was renamed after discussions with Hutchinson.

"He did not want it to be negative, so we re-messaged it," she said. "It was relatively easy to do because it is focused on total health."

"I wanted this to be a positive value set for the state of Arkansas," the governor said.

"This is not an anti-obesity phraseology, this is a Healthy Active Arkansas.

"We don't want someone who is overweight in school to go away feeling worse because they've been singled out as not fitting in. That's not the objective of this, is to stigmatize any element of our society," he added.

The full Healthy Active Arkansas plan can be found online at healthyactive.org.