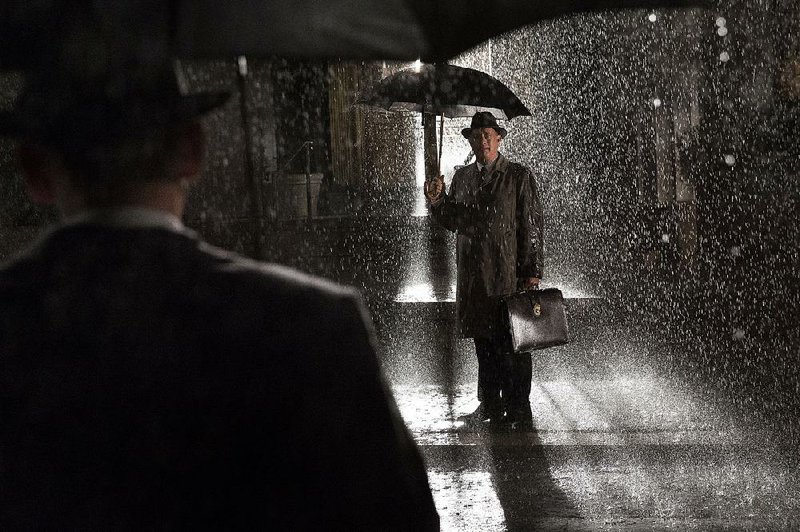 James B. Donovan (Tom Hanks) is recruited by the CIA during the Cold War to help rescue a pilot detained in the Soviet Union in Steven Spielberg’s Bridge of Spies, a drama based on a true story.

Steven Spielberg's Bridge of Spies is a brief for due process -- the ancient concept that even the most vile of us are entitled to legal representation. Even though the film is set in 1957, Spielberg's point is still valid and urgent. 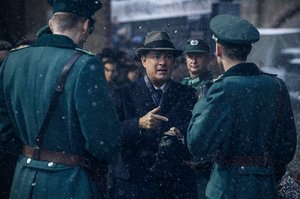 Thankfully, because it is Spielberg conveying the message, it's as entertaining as it is obvious.

Rating: PG-13, for some violence and brief strong language

Working with a script by Matt Charman and Joel Coen and Ethan Coen (the fraternal duo who gave us Fargo and True Grit), Spielberg recounts a client who tests any attorney's willingness to provide adequate counsel.

In 1957 New York, a Soviet agent with a British passport named Rudolf Abel (Mark Rylance) winds up in FBI custody. If the Bureau has taken a shortcut or two with the arrest, there's no question of Abel's guilt or capacity to do harm. Because of the negligible chance of acquittal and the fact that anyone representing him would attract public hatred for even thinking of giving him adequate counsel during the height of the Cold War, nobody is rushing to represent him.

Nonetheless, the firm that employs James B. Donovan (Tom Hanks at his most angelic) chooses him because he was a prosecutor during the Nuremberg trials after World War II. While the government is eager to put Abel away or possibly execute him, having a kangaroo court try him would give the Russians a moral high ground at the height of a loud propaganda battle. The Nuremberg trials demonstrated that even people as evil as Hermann Goering deserved and could receive a fair hearing, so Donovan has little choice but to vigorously pursue the case.

If Hanks is the expectedly ideal person to serve as a mouthpiece for why we have the Bill of Rights, Spielberg wisely populates the supporting cast with a series of intriguingly quirky characters who would be justly at home in, well, a Coen brothers' movie.

Abel, for example, is more like a real spy than a typical movie villain. His horn-rimmed glasses and his love of painting are the only visual traits that make him stick out in a crowd. He's maddening for the government and the attorney who represents him because he's quiet, seemingly passive but unrelenting in his refusal to play ball with the CIA. When he's being made aware of how dire his situation is, he shows only the faintest of emotions. When Donovan asks why, he replies, "Would it help?"

Because he's neither intimidating nor cloying in manner, Rylance gives Abel a fascinating subtlety that keeps the rest of the film from stepping into overkill.

Yes, we get to hear the background orchestra swell when Hanks speaks, but Spielberg has developed an eye for nuance as he has matured. Giving Bridge of Spies a needed sense of tension is that Abel could be useful in a prisoner trade because the Soviets have Lt. Francis Gary Powers (Austin Stowell), a spy pilot loaded with secrets the Reds would love to have.

Because he's not directly tied with either government, Donovan becomes a negotiator for swapping Abel for the courageous Powers and an American graduate student named Fred Pryor (Will Rogers) who wound up on the wrong side of the Berlin Wall.

Donovan now has to deal with U.S. authorities as well as the Soviets and the East Germans. This means he has to handle three parties who have competing agendas. The Soviets may control the East Germans, but the latter understandably resent it because their cities are still in ruins from Russian bombs.

There's a reason Hanks keeps getting these roles.

He provides an ideal counterweight to shady characters on both sides of the Iron Curtain. Whether it's his enigmatic client, his own two-faced boss (a wonderfully slippery Alan Alda), a Machiavellian CIA Agent (Scott Shepherd), a peevish German attorney (Sebastian Koch) or a coy Russian operative (Mikhail Gorevoy), Donovan has to come off strongly enough to stand up to each. With Hanks, this isn't much of a worry.

Thanks to his gifted cinematographer Janusz Kaminski, who has shot nearly every Spielberg film since Schindler's List, Spielberg makes the silent terror of the Cold War seem real. The events depicted in Bridge of Spies are a troubling reminder of how negotiations can be just as heroic as battles.