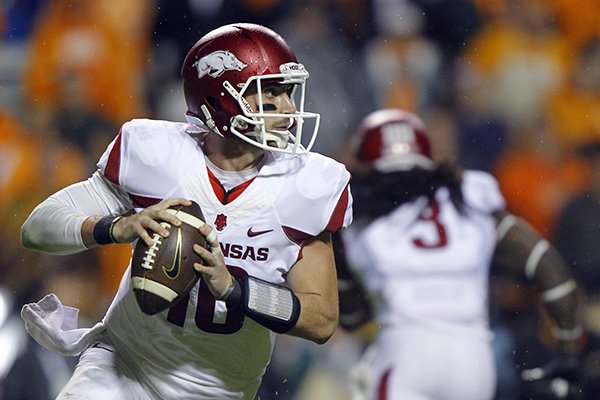 Arkansas quarterback Brandon Allen (10) looks for a receiver during the first half of an NCAA college football game against Tennessee Saturday, Oct. 3, 2015, in Knoxville, Tenn. (AP Photo/Wade Payne)

FAYETTEVILLE — Very little has gone as hoped or planned so far this season for an Arkansas team that began the season ranked before falling back to the bottom of the Southeastern Conference for a third straight year.

Despite the frustrating first half, coach Bret Bielema insists the Razorbacks (2-4, 1-2 SEC) have made progress and are keeping hopes alive of making a bowl game for a second straight year.

Arkansas enters this weekend with its lone bye of the season, a fitting time following a six-game stretch that's seen disappointing losses to No. 22 Toledo, Texas Tech and No. 9 Texas A&M, along with last week's 27-14 setback at No. 10 Alabama. The combined record of those four teams is 19-3, though that's of little comfort for a weary Razorbacks fan base that thought the program had returned to SEC relevance following a strong finish to last season.

Bielema has come under increasing criticism in Arkansas in recent weeks, even following a conference road win at Tennessee, as his league record has fallen to 3-16 in three seasons.

And while the Internet message boards and local talk radio callers haven't hesitated to pile on the former Wisconsin coach, he insisted he's "100 percent" secure in his future with the Razorbacks.

As difficult as the first half of the season was for Arkansas, particularly in the light of crippling injuries to running back Jonathan Williams and the team's top three wide receivers, the second-half schedule does provide hope of reaching the six wins needed to reach bowl eligibility.

The Razorbacks are expected to be favored in four of their final six games, beginning next week when they host struggling Auburn. That's followed by a nonconference matchup with Tennessee-Martin before games against No. 13 Mississippi, No. 6 LSU, Mississippi State and Missouri to close out the schedule.

Arkansas used a late-season push a year ago to finish 7-6, including wins over the Rebels and LSU, though that came in a year of low expectations — unlike this year when the Razorbacks began the season ranked 18th.

Whether Bielema can guide Arkansas out of its first-half hole this season remains to be seen, but the third-year coach said his confidence hasn't wavered.

In fact, he said the loss to Alabama — in which he said the Razorbacks went "toe to toe" with the Crimson Tide — showed how Arkansas has improved and remained competitive despite the injuries and early setbacks.

"I want to speed this process up as fast as I can," Bielema said. "There's no doubt in my mind in Week 6 ... I know they're a better team today than they were in Week 1.

"We've got to get more soldiers that are ready to fight the fight for quarters in a long SEC schedule, I think more than anything."