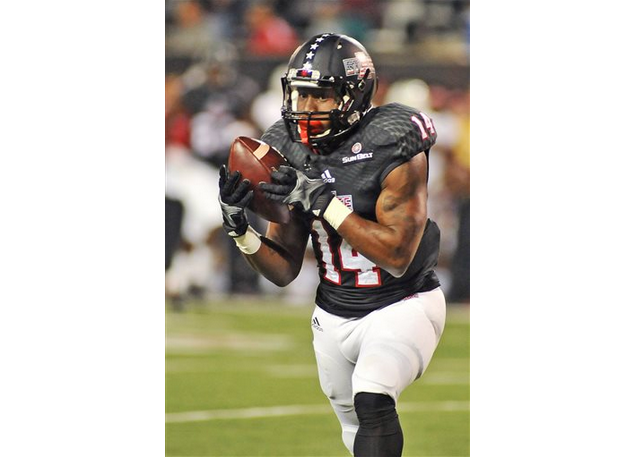 Arkansas State wide receiver Chris Murray catches a pass from Fredi Knighten to score a touchdown during the game against Louisiana-Lafayette on Tuesday, Oct. 20, 2015, in Jonesboro.

JONESBORO — Arkansas State jumped to a lead with the help of its running game Tuesday night. Then it used its defense to hold on in beating its biggest Sun Belt rival for the first time in three seasons.

ASU jumped to a four-touchdown lead but had to hang on after Louisiana-Lafayette got within 10 in the fourth quarter. It wasn’t until forcing a turnover on downs with 4:10 left that ASU was able to close out a 37-27 win in front of an announced crowd of 20,495.

The victory kept ASU (4-3, 3-0) among three unbeaten teams in the Sun Belt and avenged two consecutive losses to the Ragin’ Cajuns (2-4, 1-1), both of which also came in front of Tuesday night ESPN2 telecasts.

ASU didn’t give up 419 yards rushing like it did in last year’s loss, but quarterback Jalen Nixon passed for 253 and rushed for 201 yards to mount a late rally.

But ASU countered with its ground game, jumping to a 27-0 lead while gaining 306 yards on 52 carries. Warren Wand had 98 yards on 9 carries, while Michael Gordon gained 73 yards and scored a touchdown, Fredi Knighten gained 72 yards, and Johnston White had 62 yards and one touchdown.

Louisiana-Lafayette cut ASU’s lead to 37-21 entering the fourth quarter and 37-27 with 11:02 left on a Nixon 20-yard pass to Elijah McGuire. But ASU forced a turnover on downs on the Ragin’ Cajuns’ next two possessions to hang on.