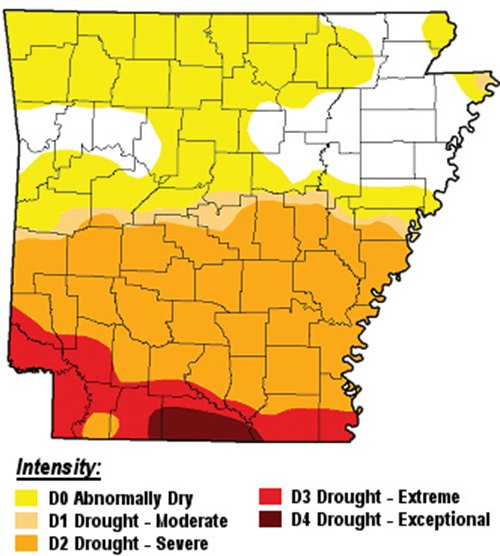 “When Will It Rain?” is a once-popular song by the band Jackyl that told the story of a person suffering in the summer heat. While the heat is leaving central Arkansas, it doesn’t seem like the rain is coming.

“We basically have what is classified as drought conditions in the southern half of the state,” says Chris Buonanno, science and operation officer for the National Weather Service. “It gets worse in severity as you go south toward the Louisiana border.”

A drought is a period of below-average precipitation, which can result in prolonged shortages in water supply.

Little Rock had 0.12 inches of precipitation in September, which is less than the 3.18 inches that’s considered normal. As of Oct. 12, Little Rock has gotten 0.02 inches, which is 1 percent of normal.

Arkansas isn’t the only Southern state in the drought’s grasp. Portions of Texas, Louisiana and Mississippi have also felt the lack of rain over the past few months. Two-thirds of Louisiana is experiencing either “extreme drought” or “exceptional drought” conditions, with the rest of the state being in a “moderate drought” or “abnormally dry.”

The area under “severe drought” in Arkansas increased 32.88 percent from the prior week, while “extreme drought” climbed by 6.43 percent and “exceptional” by 0.4 percent.

“Most of the state through the year is at about average as far as rainfall,” Buonanno says. “It’s the short-term where the drought has developed.”

A short-term drought is described as one that is typically less than six months long. The regional multistate drought is categorized as short term. The numbers reflect a class degradation for much of the state, either going from “moderate” to “severe” or “normal” to “abnormally dry.”

As far as rain patterns, it seems like summer is still here, Buonanno says.

“In the summer months, the precipitation systems tend to be less widespread than in winter and spring months,” Buonanno says. “Over the last two months, very little thunderstorm activity has occurred.”

The first 12 days of October saw little or no rain from eastern Texas to Mississippi and northward, according to the Drought Monitor.

“Winter and spring were above normal [for rainfall] but went quickly below normal in the last two months,” Buonanno says.

While El Nino patterns are used for predicting long-term patterns because it is a condition that can last more than a year, meteorologists also watch more short-term influences such as the Arctic Oscillation. El Nino years tend to mean greater-than-average rainfall for Arkansas.

But relief is likely on the way. NOAA is predicting a 20 percent chance of showers and thunderstorms Friday.

Buonanno says it looks like the pattern in the weather is changing for favorable above-normal precipitation over the next few days.