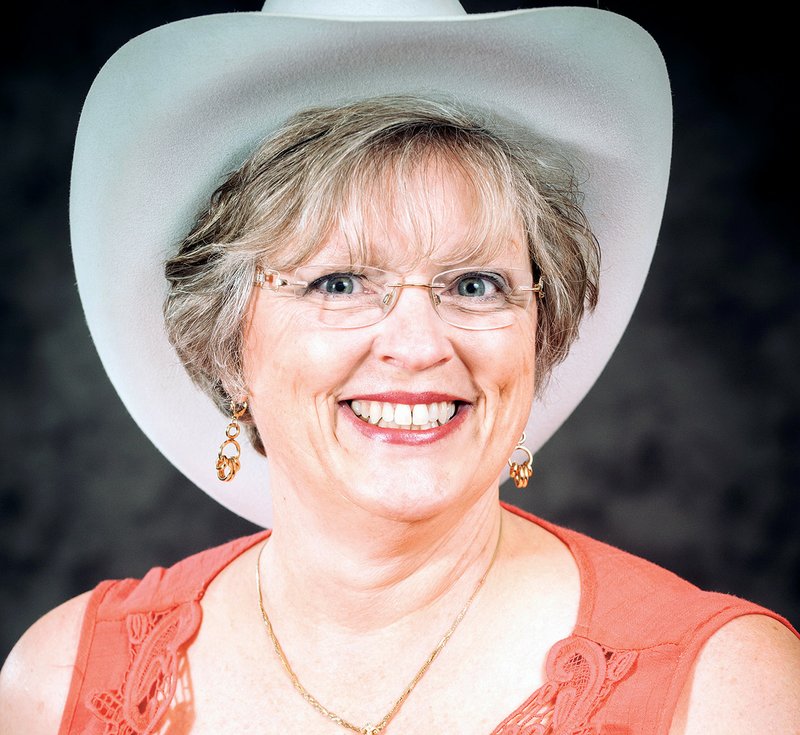 Cynthia D’Alba, a Hot springs native and an author, is a founding member and former president of the Diamond State Romance Authors.

Arkansas is for lovers?

Maybe not, but there is something that kindles the creative flame of the state’s romance writers.

Cynthia D’Alba, a pseudonym for Cynthia D. Morgan, is an author who has kindled that flame, stoked it and shared it with her readers. D’Alba is the author of the Texas Montgomery Mavericks series, which began in 2012 with the release of Texas Two Step. Since then, four more books have been released in the series, which tells the story of members of a fictional Texas family and their love lives. Her next book in the series, Texas Hustle, will be released in November.

“I’ve always been a reader, a huge reader,” D’Alba says. “Mother always tells me that you had to be 5 to get a library card growing up, and she had to use my sister’s card to check out books for me because I was reading at such an early age.”

Although D’Alba didn’t write novels at that time, she did practice some creative writing.

“My mother would kill me, but I would write fake letters from my parents in grade school saying, ‘Please let Cindy stay in from recess; she’s sick,’” D’Alba says. “She wasn’t sick; she just wanted to read.”

D’Alba is a founding member and former president of the Diamond State Romance Authors, a group of authors that bills itself as having an “obsession” for writing romance. The mission of the organization is to promote excellence in romantic fiction and advance professional interests. On Nov. 21, the group will hold a meeting titled “So I’ve Written a Book … What Now?” from 11:30 a.m. to 1 p.m at the Thompson Library in Little Rock. The event will feature an author panel and is open to the public.

D’Alba was recently elected on of 12 Directors-at-Large to the Romance Writers of America’s board of directors, the body’s governing board. The board is responsible for setting the goals, priorities and direction for the RWA. As a director, she will lend her voice to the direction of the organization, along with other elected directors and officers.

Q: What was the trigger for you to begin your writing career?

A: After I left work, my husband watched me read about 1,000 books one year. He said, “You know, I bet you could write one of those.” I thought, “OK, why not? How hard can it be?” It’s so much harder than I ever dreamed it would be. I never tackled anything like that in my life. That conversation was in 2005.

Q: What has your output been like since then?

A: I’ve got seven books in one series known as the Texas Montgomery Mavericks, so there are five books out. Book six, called Texas Hustle, comes out in November. The last planned book in the series comes out in April, and it’s called Texas Lullaby.

Then, in addition to that, I have a number of shorter works like Saddles and Soot and A Cowboy’s Seduction. Both of those hit The New York Times and USA Today best-seller lists.

Q: How would you describe the subgenre your novels fall in?

A: It’s contemporary Western romance. It means most of my heroes are cowboys —not all, but most of them.

Q: Any reason for cowboys?

A: No. It’s funny. The first story I wrote is called “Texas Two Step,” and that started out as an Italian prince, and it just didn’t work. How I ended up with cowboys, I truly don’t know. I’m always saying I write by my characters. I know my characters before I ever know my story. A lot of people say, “I got this story line done and in such and such a place. Let’s deliver some characters.” Mine don’t work in such a way. Usually, I have my characters. I know who I’m going to write about and go from there. So in that case, it sort [of] turned out to be a cowboy. It didn’t set out to be one. That’s how he turned out, and my readers seem to enjoy that genre, and I stayed there. I’ve done some firemen, too.

Q: What’s the best part of the business aspect?

A: I love my readers. I am probably more outgoing than a lot of writers. I’m not really introverted, so when I go to conferences where I have readers, I love to meet them. Also, I love to sit with other writers and just talk about the business or what’s going on. I really enjoy the social aspect.

Q: If you’re going to be a writer, do you need a day job?

A: Initially, you’re going to need a day job. Let me toss this in. In November, the Diamond State Romance Authors do one public program for free at the library. … We always talk about writing and publishing. This year, we’re talking about people who want to go into the self-publishing or [the] indie-publishing world and how you do it. One of the things romance writers are wonderful about in this genre is that they pay it forward. It’s not like, “We know the secret handshake, and we’re not going to show it to you.” They’re very giving, and that’s one of [the] things about writing.

Newbie writers need another source of income other than writing. The chances of your first one hitting it big [are small]. It happens — but you’re going to win the lottery, too. It’s very difficult. It’s very difficult to make a living at this. The vast majority of people I know, people I consider successful writers — most of them have day jobs. I’m lucky in that I don’t have to do that because I have a husband who is more than supportive of my work.

Q: Are you a self-publisher or do you use a publisher?

A: I’ve done both. I’m sort of what they call a hybrid writer. I have some indie publishing, and I also have a traditional publisher. A foot in both worlds.

Q: How did Diamond State Romance Writers get its start?

A: In 2016, we will be having our first organizing meeting. It took place in 2006. We’ve been around 10 years; it’s amazing. A new writer moved to Arkansas and sent out this note on the Internet, which said, “I’m moving to Arkansas. Are there any other members of Romance Writers of America there?” So yeah, we said, “Yeah we are.”

But there was no chapter. So five of us met at Barnes and Noble on Chenal [Parkway] on April 15 — I remember that because it was IRS day of 2006. And we decided we’d start a chapter, and I would be the first president. I’m sure I got that job because of my business background, and I could handle all the forms, incorporation forms and things like that.

Q: What do Diamond State Romance Writers do?

A: When we first started, it was a lot of unpublished authors and a few published authors. The chapter in 10 years is compromised of mostly published authors now and a few unpublished. What we do is meet once a month on the third Wednesday at Thompson Library, and there’s always a program. The program always deals with some facet of our world. It may be a craft or how to edit, or how to plan characters or plot, or use social media more effectively or newsletters and how to build them. Every third Saturday is like a workshop once a month on various elements that deal with the world we live in as writers. And we welcome new writers to our midst. We’re happy to share what we’ve learned, what works for us and what doesn’t.

Q: What role does Arkansas play in your writing?

A: A lot. I place most of my books in Texas. Texas is so big but has a lot of commonality with Arkansas. My grandparents were rural, so I grew up seeing horses and cattle and things along that line. My mother’s parents had a farm. I grew up in a rural area, and that influences my writing. I think that gives it a flavor of the South. That works better than someone who is trying to fake it from up North that has never lived in the South.

My editor is actually in Israel, so we have to talk in the middle of the night. Sometimes, things I say throw her. She asks, “Is that something somebody really says?” and I say, “Yes.” I think it gives an authenticity to my writing. I am getting ready to begin a new series in Arkansas in a fake town that looks a whole lot like Hot Springs, but that’s on my drawing board.

Diamond State Writers is a chapter of a national organization — Romance Writers of America. RWA is the leading organization for romance writers. We have over 10,000 members — they can be influential in taking a stand on various issues if need be. It’s very much like each chapter is an offspring from the main organization, so there’s a lot of commonality between all the chapters. We’re all driven by this one main entity based in Houston, Texas.

Romance is the largest-selling genre in the world. There’s [more] romance novels sold than any other genre period. It’s huge.

Q: You hear about male writers writing under female pseudonyms. Is there any truth to that?

A: They have, and we have some women who write under a man’s name. One of our new board members is a man. We’re really excited about that because I think there’s a place in romance for men. We do things differently, but I think having males around is you get a chance to get their view points. Men are stepping forward now and doing it under there own name. I would say if you gave me two blind books and one was wrote by a man and another a woman, I could probably tell you which gender wrote each book. We just write different. RWA actually had a male president in the past; he writes for Harlequin. There’s no reason that a man could not do well in the romance genre.

Q: What’s it like living in Arkansas vs. being in a big city?

A: I really don’t know. I think maybe if you’re in a more urban area, you have more anonymity. As an example, Charlaine Harris, who wrote the Sookie Stackhouse books. She lived in Arkansas for years, in Magnolia. When she got huge, readers were showing up on her doorstep. She doesn’t live in Arkansas anymore; she lives in Texas. I think there’s an anonymity you can have in larger cities, but on the other hand, small-town romance is huge in the romance writing. I like living here; I live here by choice. It’s a great place to live. I’ve been to large towns. I love them, but I like Arkansas, and I think it colors how I see the world.

Q: Is it easier to make a living as a writer in Arkansas?

A: It doesn’t take us much to live here. But again, most of them have secondary jobs.

Q: What places in Arkansas would you like to use as settings or inspiration for settings?

A: Hot Springs. I’d love to do a story in Fayetteville. A fake-university-type story. I’m a huge Razorbacks fan; they’re breaking my heart this year. The other thing I think is cool about Arkansas is the diamond mine in Murfreesboro. That’d be a really cool setting. Eureka Springs would be another cool setting.