Dykes settled in, eager for Year 2 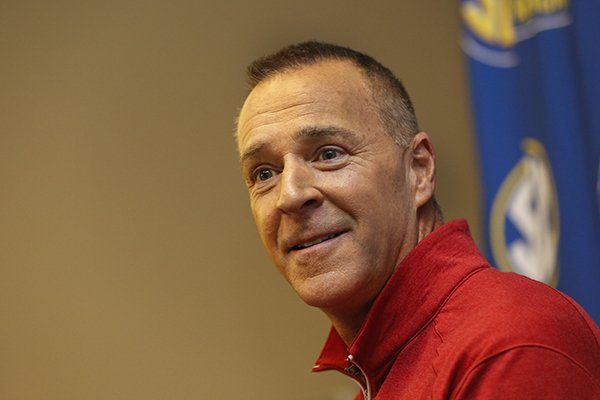 CHARLOTTE, N.C. -- When Jimmy Dykes made his first appearance at SEC media days as Arkansas' women's basketball coach last year, he had to play defense as well as his players did in holding opponents to 36.8 percent shooting.

Dykes found himself defending his hiring at Arkansas against criticism that he never had been a head coach, hadn't coached women's players and had been out of coaching since 1991 when he was a men's assistant at Oklahoma State.

Stanford Coach Tara VanDerveer called it "very depressing" that Dykes, who spent the previous 15 years working for ESPN as a college basketball analyst, was hired instead of more experienced coaches. Beth Bass, head of the Women's Basketball Coaches Association, issued a statement that Dykes' hire was "disappointing," especially for whom she believed were more qualified female candidates.

Dykes didn't have to go on the defensive Thursday during his second round of interviews at SEC media days.

It was an impressive ending for the Razorbacks (18-14, 6-10 SEC) considering they went into the season with nine scholarship players and at times were down to eight healthy players.

Dykes said Thursday he didn't want to get wrapped up in what others said about his hiring -- whether it was praise or criticism -- so he could focus on his coaching duties, but there was some satisfaction with how his Arkansas debut turned out.

"You can't completely block out all the noise that surrounded my hire," Dykes said. "So for us to have a successful first year it probably added a little extra sauce to it, honestly."

Texas A&M Coach Gary Blair, who coached Arkansas for 10 seasons from 1993-2003, has been a supporter of Dykes since his hiring.

"You've always got to have a spin doctor saying, 'Well, this is not good for the women's coaches who have waited their turn,' " Blair said. "Well, Jimmy waited his turn, too, OK?

"He chose this profession, and why not Jimmy? He's doing good. I thought Jimmy did a heck of a job last year. Jimmy's been in coaching. You don't forget how to ride the bicycle.

Other SEC coaches also were impressed by Dykes' debut.

"Those kids played hard for him," said Mississippi State Coach Vic Schaeffer, a former Arkansas assistant. "They played the system that he installed and played it very well."

Tennessee Coach Holly Warlick was a Lady Volunteers assistant coach for 27 seasons before being promoted to succeed Pat Summitt before the 2012-13 season. She related to some of the criticism directed toward Dykes.

"A lot of people questioned whether I could be a head coach, but I think it's in your blood," Warlick said. "I think Jimmy proved himself with the results, and he's just going to get better. Part of it is getting players that believe in you, and I think those kids believed in him. He's putting together a team that fits his style, his personality."

Arkansas senior forward Melissa Wolff, a returning starter along with junior forward Jessica Jackson and junior guard Kelsey Brooks, said Dykes was a good fit from the day he was hired.

"I never once sensed that he was uncomfortable in his role," Wolff said. "He was very confident in everything he did last year, but I think this year -- having his recruits that he brought in and being more familiar with our returning players -- has really made him more comfortable."

Dykes said he does feel more comfortable going into his second season. He recalled SEC men's coaches that he covered with ESPN -- John Calipari, Kevin Stallings and Billy Donovan -- telling him it would take time to adjust to his new job.

"I didn't understand it then," Dykes said. "Now I do, just because I've been through it. Last season generated a lot of enthusiasm and momentum in our recruiting. I think it gave Arkansas' women's basketball an extra shot of adrenaline now in our state."

The Razorbacks go into this season with 12 players, including eight newcomers led by freshman guards Jordan Danberry from Conway and Malica Monk from North Little Rock, who were ranked the No. 47 and No. 65 national high school players by ESPN last year.

"I have no idea about our team right now," Dykes said. "It's too early to know how they're going to perform when we have to start playing, but I like their fight, their toughness, their heart."