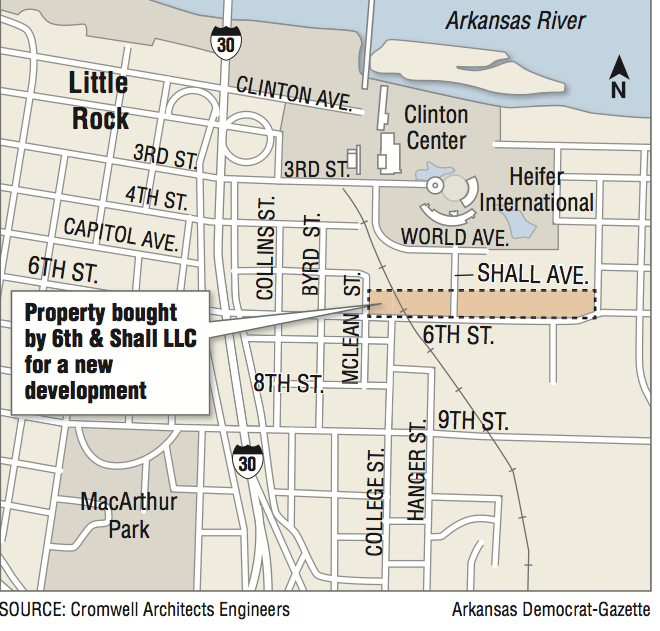 The targeted area is primarily industrial. It's being called a River Market District with "grit."

"From a feel perspective, what's important to us is that the neighborhood maintains its identity and heritage as a gritty warehouse community," said Dan Fowler, chief operating officer at Cromwell. "We want to look closely at the value of those existing buildings and the grit that they have and hopefully push to retain as much of that as we can."

The initial 3.5-acre area is at East Sixth Street and Shall Avenue, in the shadow of Heifer International. Last week, a group called 6th & Shall LLC, a subsidiary of Cromwell, bought the property from LASA Inc. for nearly $1.4 million. James Adamson is listed as the registered agent for LASA in filings with the Arkansas secretary of state's office; 6th & Shall LLC consists of Cromwell partners and stockholders.

The purchase included five tracts formerly known as the Stebbins and Roberts properties and most recently was occupied by Sterling Paint. Chris Moses and Eric Nelson of Moses Tucker represented the buyers and Lee Strother and Dickson Flake of Colliers International represented the sellers.

The River Market and this new development are about a 15-minute walk from each other.

No proposals have been submitted to the city, though Mayor Mark Stodola was briefed Friday on the development group's plans.

Cromwell plans to refurbish and expand a 50,000-square-foot warehouse in the center of the property for its new Little Rock office and as space to lease. The group proposes to add another 20,000 square feet to the building and also is applying to get the property on the National Register of Historic Places. Cromwell will use only one-third of the development. Other uses for the space include restaurants, apartments and retail.

"It's very similar, I think, to the start of the River Market District 20 years ago," said Jimmy Moses, a founding partner in Moses Tucker. "They are the 'market,' like the River Market and farmers market was to Clinton Avenue."

"I think it will take on its own identity," Jimmy Moses said. It won't have the density of buildings found in today's River Market, but it's similar construction, he said. Work at the site should start within a year.

In the meantime, Moses Tucker is listing the multistory building Cromwell built for its office 40 years ago at Markham and Spring streets. The firm is 130 years old this year and has 120 professionals working in Little Rock. Cromwell has offices in Jonesboro, Fayetteville, N.C., and Kaiserslautern, Germany.

In addition to being a development partner, Moses Tucker will handle management and leasing for Cromwell.

The property that 6th & Shall bought includes a building that houses Rock Town Distillery and a carriage house that is leased. On land next to Rock Town on the north, eStem Public Charter Schools Inc. has proposed a 1,200-seat elementary/middle school to go in a warehouse at 400 Shall St.

Moses Tucker and 6th & Shall are calling the area "East Little Rock" until they can come up with a catchier name. Most of the buildings in the area are industrial, though that's changing. In addition to Rock Town, Lost Forty Brewing settled east of Interstate 30 in the past year. Another brewery, Rebel Kettle Brewing Co., is set to move there soon, he said.

Cromwell's leaders envision their building as the cornerstone of revitalization in the area.

"We really see ourselves as a small part of a pretty large neighborhood," said Fowler, referring to an area that stretches to the airport on the east and includes a marina and yacht club that John Burkhalter is developing on the south side of the Arkansas River. Residential areas, also on the east side of the neighborhood, are in a transitional stage, he said.

"There are tons of empty lots," Fowler added. "We see this coming back as new, single-family houses -- more affordable housing -- kind of like what you see in the MacArthur Park area."

The Arkansas Highway and Transportation Department has plans to widen the Interstate 30 corridor through downtown Little Rock and North Little Rock. The project would affect the interstate's interchange with Arkansas 10 downtown and other aspects of transportation in the area.

The East Little Rock developers wouldn't give an opinion on what they think about the widening project but understand that their plans are not a concern of the Highway Department.

"The Highway Department is concerned about moving traffic, and it's not really their job to be concerned about how that affects all of downtown Little Rock," Penix said.

"I believe what we need to be doing as a community is slowing this whole process down and creating a significant downtown plan that addresses land use, transportation, public transit, pedestrian safety and redevelopment, so we can react as a community properly to what the Highway Department is planning for us," said Jimmy Moses, the third generation in his family to be born in Little Rock. Chris Moses, president of the company, is the fourth generation.

"The big picture is what we really should be focusing on," the elder Moses added.