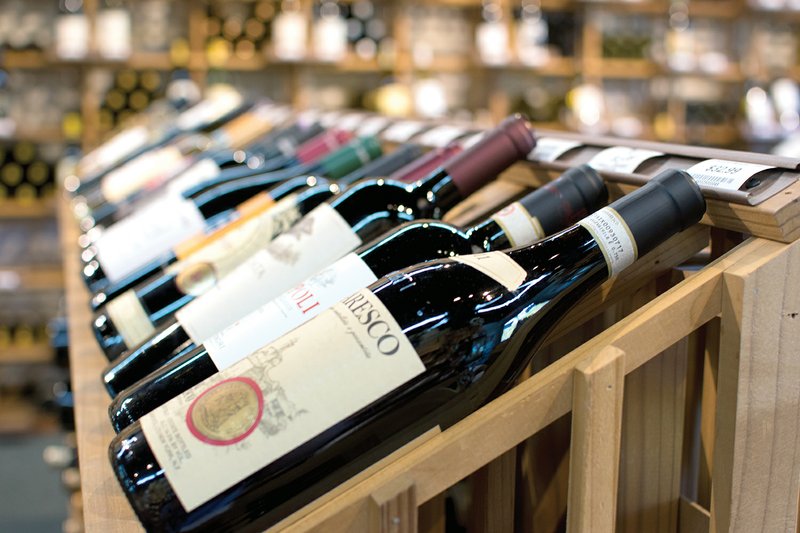 In the 1980s, Arkansas’ wine market was virtually nonexistent. Actually, that’s not particularly noteworthy because at that time, even New York didn’t really have a stronghold in the wine world. In reality, the spread of great wine across the U.S. has only really happened in the past 30 years as more information about wine and better communication with vineyards became more readily available.

So it’s no surprise that Little Rock’s wine market is lagging behind big cities on the coast, says Ken Lipsmeyer, wine instructor with the Pulaski Technical College Culinary Arts and Hospitality Management Institute.

“Arkansas is behind, but that’s only natural because we’re so far from the source, and we’re such a small market,” Lipsmeyer says. “But Arkansas is catching up fast.”

Lipsmeyer is one of the state’s most highly certified sommeliers, or wine experts. When he began working in Little Rock at the Capital Hotel in 2001, Lipsmeyer was one of the few people who had access to wines that were readily available in other parts of the U.S.

“I had what I wanted at that point, but the average consumer didn’t have much of a selection,” he says. “French wines were hardly available here, so there was no demand for it, and nobody would sell it. On top of that, there were very few places that sold good wine in Arkansas.”

One of the few wine experts in Arkansas at that time was sommelier Jeff Yant. Currently head of the wine program at Cache Restaurant, Yant started at Lulav and found himself facing an uphill battle.

“When I first started, there were only two or three restaurants in town that were wine-centric at all,” Yant says. “People just wanted to try the name brands, and that was it.”

In addition to the shortage of demand for wine, there was also a big gap in wine knowledge on the part of restaurants and retailers.

“There were a few people who knew wine here, but the overall industry was lacking, and the service trade, there was almost no broad base of knowledge at all,” Lipsmeyer says. “It was worse than starting from zero when it came to training staff. It’s a hard challenge when you have staff with no training in wine and even worse when they have a fear of wine.”

Today, Little Rock’s wine market is far ahead from 15 years ago. More than a dozen restaurants feature robust wine lists. Close to 20 hold some level of certification in wine knowledge, and distributors work hard to bring in wines from the West Coast and around the globe. So what changed?

Halloween is this weekend, and we know those of you with kids are going to have buckets full of candy taking up space in your house. Yeah, your kids would eat all of it themselves, but because you’re a good parent, you won’t let them do that. Right?

So you’re going to end up eating a few pieces after tucking them into bed. It’s inevitable. But why not take your sweets stealing to the next level? We talked with four of Little Rock’s wine experts to see what kind of pairings they could come up with for some of the most common trick-or-treats you’ll see Halloween night.

Keegan Sparks, O’Looney’s Wine and Liquor, South on Main: “Those would be nice with a [French] Sauternes.”

Bassett: “Those terrible orange and black wax-wrapped peanut butter things and white zin. They deserve each other.”

Jonathan Looney, O’Looney’s Wine and Liquor: “The first thing that comes to my mind is an oaky, buttery chardonnay. I would say a Francis Coppola Diamond Series chardonnay, and I would also say Toasted Head. Going the other direction to the high end, Jarvis Finch Hollow chardonnay. That might be a really interesting match.”

Jeff Yant, Cache Restaurant: “A Tokaji, it’s a dessert wine from Hungary, once called the ‘wine of the czars.’”

Looney: “Everyone thinks it’s cherry, but it’s really banana. With that, you could pull in some Cruix Beaujolais from France. That might be really curious. I’ve also done straight-up pinot noir with them.”

Sparks: “A sweet sherry would be nice, maybe a Gonzalez Byass, that would be good. It has that nutty, almondy thing. I tend to match sweetness levels. That one would be fun.”

Yant: “I’d go with a Monastrell from Spain. It’s red, it’s fruity, and whenever I’ve paired Monastrell with anything, I’ve been lucky.”

Sparks: “An Australian riesling from the Clare Valley. It’s very acidic, a little bit of sweetness but more on the dryer side. I think that would be delicious.”

Yant: “A German sekt, and it would have to be vintage — 2009 would be best. It’s big; it’s effervescent; it’s got some fruit flavors in there, and the acidity would cut through the sweetness.”

Bassett: “Tercos Malbec. I almost feel like this is a deconstructed grape, boozy tootsie pop. Sold.”

Sparks: “Madeira, a fortified wine. It’s like caramelizing, burning sugar is what I think of. I think it would be really nice.”

Yant: “A Barolo. It’s big; it’s over the top; the grapes are going to stand up well. The caramel and extra sugar would stand up and do very well.”

Sparks: “I might go with a big bold California zinfandel. Turley, or Green and Red would be fantastic. They have a little sugar to them. I think that might be nice.”

There is an easy line that can be traced between Little Rock’s advances in wine availability and the training that restaurant workers and retailers are now getting. Wine certifications have long been available through several bodies, but very few of them hold classes or exams in the region. For years, Lipsmeyer worked with a group in Dallas, taking students to Texas and training them for some introductory-level classes. But the higher certifications were only available on the coasts; in Napa, California; New York; or Philadelphia.

While more Little Rock workers were traveling out of state for exams, Lipsmeyer began his efforts to bring the classes closer to home. He finally succeeded earlier this year in bringing to Pulaski Tech the introductory level class and certification from the Court of Master Sommeliers.

“It was incredible,” says Jonathan Looney, owner of O’Looney’s Wine & Liquor. “Everybody who took that training passed it. It’s a testament to the work that went into preparing everybody.”

That class allowed more than 20 Little Rock-area employees to get introductory-level sommelier certification. And Lipsmeyer doesn’t plan on stopping there.

“This year, we will do the intro again, but we also want to try to do the next level up,” he says. “That’s for all the students who took the intro last year, so if they’re ready, they can take it without having to travel.”

The class is already making its mark on Little Rock’s food and beverage scene.

“It’s a boon to the restaurant industry,” Yant says. “I love it. I want everybody to become educated and succeed; I would like to see that for every restaurant in town. And I think the more we can bring consistency and knowledge, the more we’re all going to do well.”

Arkansas’ distribution laws require that wineries partner with a single distributor in order to sell their products in the state. This requires some strategy for winemakers. Do you go with a big distributor that might be selling more of your competitor’s products? Or do you choose a smaller one that might not have the same level of access?

Still, smaller wineries have begun zeroing in on The Natural State, delivering a number of wines that were previously unavailable here. As it turns out, Arkansas’ size is actually a positive for a lot of winemakers.

“Because we’re small, we’re a niche market for certain players in the wine trade,” Lipsmeyer says. “They can’t supply product for the whole country, but they can come in, supply the whole market, and it gives them a way to market and promote sales.”

That shift has had an impact on both restaurants and retail locations. Looney says it’s given him the ability to provide better service, which in turn encourages even more growth.

“I want to be able to deliver value for the customer at any price point so that I can put together a custom case for them,” Looney says. “Crafting and curating the experience so that our guests drink better than they might if they were choosing the wine for themselves.”

Little Rock’s comparatively small size has led to another, often-overlooked advantage. Yant says it’s helped him in both getting to know his customers and being able to guess how new clients will react to certain pairings.

“I know my customers’ palates,” Yant says. “It gives me the opportunity to know your palate and be able to pair for you. And the Little Rock market in particular is different because there’s a certain flavor profile here. People like certain wines, and they tend to stay with those wines. That gives me an advantage, being in the market as long as I have, so that I can pair to the Little Rock market.”

A third reason for Little Rock’s growth comes from the customers themselves. With the national rise in demand for wine, bigger cities are supplying increasingly exotic vintages from all around the world. And when Arkansans travel and taste these wines, it leads to a greater demand right here at home.

“People were coming back saying, ‘Well, why don’t we have this wine?’” Lipsmeyer says. “And over time, that pent-up demand led some of the larger distributors to step up and deliver wines that we didn’t have before.”

That points to another related reason for growth: an increase in consumer wine education. Yant says he’s seeing more and more guests who are able to tell him exactly what they want.

“People used to want to drink all the big-name brands,” Yant says. “Now people are more willing to try new things, and not only that, but they also are educating me about different wines.”

WHAT’S IN THE FUTURE?

grow so much bigger. Lipsmeyer sees Little Rock’s potential for improvement being less about quantity and more about quality.

“Now that there are key players who understand the scope, or syllabus, of wine, they can teach that to people working in restaurants,” Lipsmeyer says. “Waiters will pick it up quickly because they’re around it all day. And that’s the key to sustainable growth. It’s the waiters who talk to the customers, and the customer gets education and inspiration as much as anything else. If the waiter can understand the narrative of a given wine, they can share that story with the customer, which drives the customer to want more.

“We are where we can be with the size of the market we have here. You can’t get much further ahead than the dollars that are there to buy wine.”

Both Yant and Looney echoed Lipsmeyer’s sentiment, saying that it’s now the job of restaurant workers and retailers to keep the trend going.

“Guys like me, our job is to show people they don’t have to spend $100 on a bottle of wine to have an exceptional wine,” Yant says. “Going out and finding a great bottle of wine for $100 isn’t a difficult task. Finding that exceptional bottle at $20, that’s why I’m here.”

“I love being part of the changes that are happening,” Looney says. “I love connecting with the independent retailers doing really neat things with food and wine. I hope we set that tone, as well.”