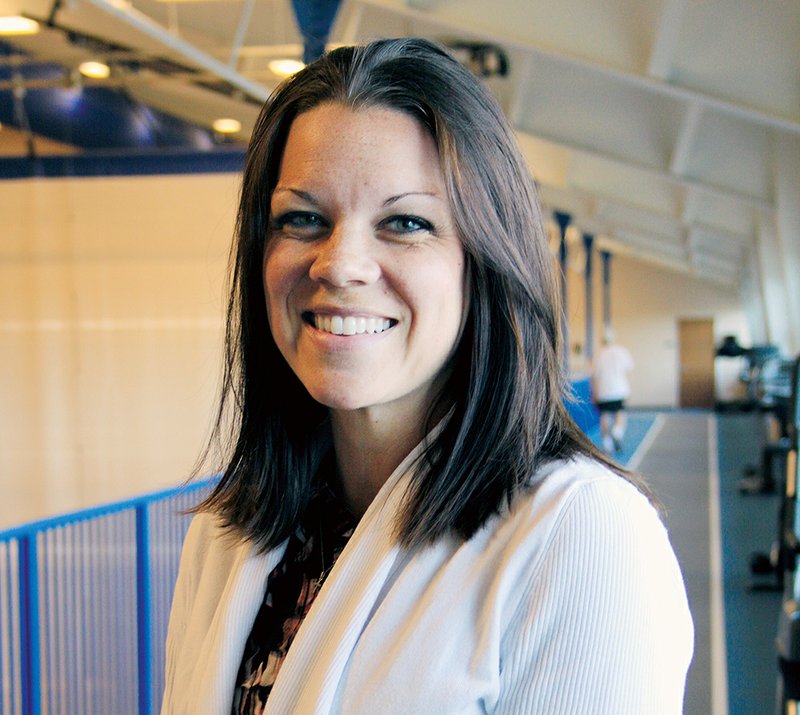 Charlotte Rue is the new human resources director for the city of Bryant.

The hustle and bustle at the heart of American politics in Washington, D.C., is the destination for many people in the U.S. who see it as the ultimate place to find a career — not to mention some of the best public transportation, schools and suburbs in the country.

For many, Arkansas is considered a place one moves out of to find a career. But for Charlotte Rue, Bryant’s new human resources director, the state is where her career took off.

Rue, 34, hails from Fairfax, Virginia, in the Washington, D.C., metro area. She attended George Mason University and graduated with a communications degree with a focus on public relations.

“I thought I really wanted to do public relations, but then I realized that I didn’t want the lifestyle that came with PR,” she says. “So my first job out of college was a recruitment position with the federal government in D.C. It was a neat opportunity do some of the administrative side. It was a human resources position with a focus on recruitment.”

Rue says she got to travel and promote the agency, talking with college students and military members.

“It was a really neat opportunity to get to know the promotional side of things and also learn something I didn’t expect to be learning, which was human resources,” she says.

Rue met her husband, Justin, in D.C. Justin had been in the Navy, but after leaving it, he had found a career in sales. His career led the couple to Atlanta, where Rue continued her human resources career and found herself enjoying it. Justin’s career would soon take them from Atlanta to Arkansas, where Rue really began to stand out as the human resources manager for the Capital Hotel.

In 2012, the family moved back to Virginia, this time living in Mechanicsville. In less than a year, they were heading back to The Natural State.

In the middle of a busy schedule that sees her going to job fairs and handling employee affairs for the city, Rue took a few minutes to chat about life in Arkansas and the world of human resources.

Q: What is it about the position in Bryant that appealed to you?

A: Being a part of the community. I’m raising two small children in Bryant, and it’s important to me as a mother to actively contribute to the community that they’re being raised in. I am someone who chooses to be a working mother. If I’m going to take time away from my children, I need that time to be worthwhile to them, as well. I saw a unique opportunity to participate in the community they’re growing up in. I also saw, when I got in here, I saw a really neat group of people who are forward thinking and open to new ideas, and that’s the kind of environment I thrive in. [I like] organizations and communities who want to do better and want to improve and who aren’t opposed to change, even though it comes with challenges. Those are all really big points for me in terms of what I look for when I’m going to spend my time — if I’m not going to spend my time with my family.

Q:What are you going to be doing in this job?

A: Growing and developing the city. I have a lot of initiatives, which are in concept phase, which we’d really like to nail down. One of those is starting to become more popular among other organizations and other communities: wellness. [We’re] really trying to drive that home and incorporate the employees into various wellness programs and things like that. That’s a big front-burner goal right now — developing our community and healthy lifestyles. Programs like that are a little more outside the box than what most people would consider for the HR office. We’re really trying to [be] progressive and creative while growing the city in ways that engage the community.

Q: What made you choose Bryant as the place to live?

A: Family planning. We are both suburb people of big cities. My husband and I were both raised in the suburbs of a large city. We enjoy cities, but we like the lifestyle that can be built in the suburb — a house and a yard — and we also hoped when we moved out here to have children. We went to public school and wanted our kids to go to public schools, and Bryant was a well-known school district as one of the best, so we headed out this way.

Q: Was Bryant the first place you lived in Arkansas?

A: We initially lived in west Little Rock for six months. We just rented an apartment there. To be honest, we got a dog and he needed a yard, so we looked for a rental house out this direction. Also, my husband’s job was out in Benton, so we tried to divide commute time up a little bit, as well. We liked Bryant and that it was growing and progressive. The time we’ve been here, which is about seven years total, we’ve seen so much growth. It’s been really incredible to be part of it.

Q: What did you know about Arkansas before you moved here?

A: Nothing. In fact, I was the person who said, “I’m not going to go.” I had no desire to go. I struggled to leave the East Coast, not that there isn’t a place for the East Coast in my heart all the time, it’s home for me. But I got out here, and it took a little bit of time, but there was never any point where once I got out here I didn’t like it. It took some adjusting.

I had to re-establish my groundwork and create my home and things like that. But we left, and surprisingly, we both really missed it. I did not expect to miss it and leave my home state again to come back to Arkansas. So what started out as something I thought was never going to go well really turned out to be a blessing because we have found a home and great community and met incredible people out here. Love Arkansas now.

Q: Do you still dine at the Capital Hotel?

A: I do. The Capital Hotel will always be near and dear to my heart. We worked really hard to make it perfect. To be a part of it since its rebirth and knowing that family of employees, I will always return to the hotel.

Q: Got a favorite dish there?

A: My favorite is from the Capital Bar and Grill. I really like the burger. It’s a classic. When it’s in season, you got to eat the BLT.

Q: What did your husband do that required your family to move so much?

A: When we met, he was in the military. He was active duty in the Navy and was getting out, and he was wanting into sales. He started out with some family-owned companies that were based out of Montgomery, Alabama. They had Southern-based territories — Georgia, Alabama, Arkansas areas — and he was trained in Georgia and became a manager in Arkansas. So he gained territory out here. He no longer works for that company, but he has continued his sales career, which he’s pretty much a traveling salesman, working for a company based out of Minneapolis.