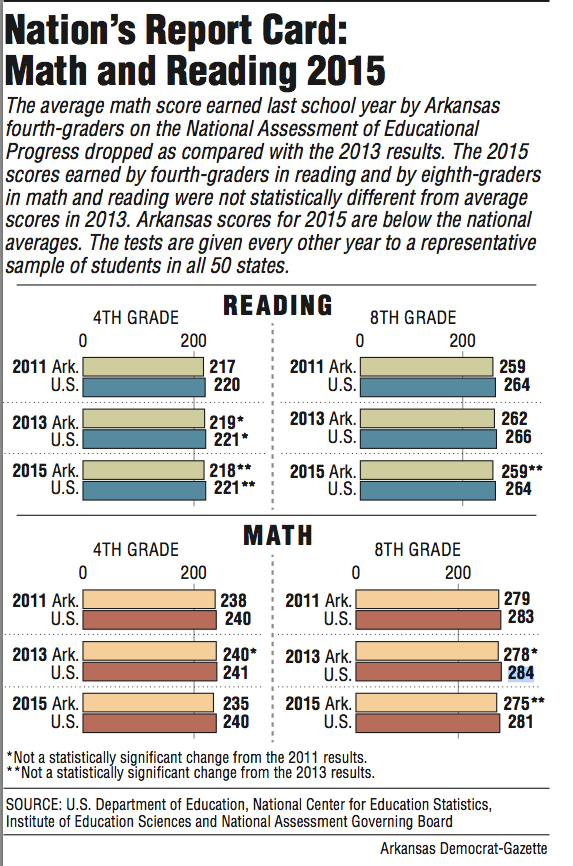 Graphs showing the nation's report card for Math and Reading 2015.

Arkansas student achievement dropped on a national fourth-grade math test in early 2015 and showed no statistical gains in other subjects and grades when compared with 2013 results, according to the Nation's Report Card, released early today. 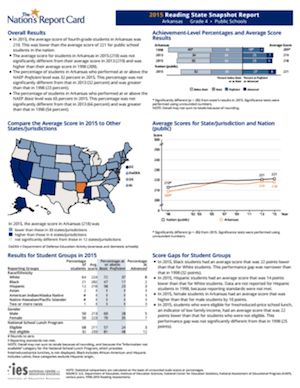 The Arkansas achievement levels lagged behind those of the nation in both fourth- and eighth-grade math and reading on the 2015 National Assessment of Educational Progress -- despite the first-ever significant score declines on the national test, which has been given since the early 1990s.

The National Assessment, also known as the Nation's Report Card, is given every other year to a representative sample of students in each of the 50 states, the District of Columbia and Department of Defense Schools. The tests were given in January through March of this year.

Typically, about 3,000 students in more than 150 Arkansas school districts are selected to take the tests. The students and the districts are not formally identified and there are no individual student, school or district results reported.

Arkansas fourth-graders in the 2014-15 school year earned an average math score of 235, a statistically significant decline from the 240 average score earned by fourth-graders in 2013 and below this year's national average of 240.

Efforts to reach Arkansas Department of Education officials on Tuesday, including Education Commissioner Johnny Key and Education Department spokesman Kimberly Friedman, by email and telephone about the test results were not successful.

The National Assessment -- the only test given in every state -- is used by policymakers and educators as an informal gauge of a state's own tests, which are more directly tied to a state's education standards.

Many states, including Arkansas, began in 2010 to phase in the new Common Core State Standards in math and English/language arts.

National education and testing leaders on Tuesday urged caution in tying the drop in the National Assessment scores to those standards, which were intended to be more academically challenging and in some cases call for skills to be taught in earlier grades.

U.S. Secretary of Education Arne Duncan told reporters during a teleconference call about the test results that the "news from this round isn't great."

He said that shouldn't be a surprise at a time when the nation's teachers are working to get up to speed in their classrooms "with new and higher standards." He said he expected the scores to "bounce around some" and that an "implementation dip is part of what we're seeing here."

"I'd like to caution everyone to be careful against drawing conclusions with so many variables," said Duncan, whose agency has been supportive of the new standards, which are now undergoing revisions in Arkansas. "I think people need real time to dig into the data thoughtfully. Anyone who claims to have all this figured out is peddling a personal agenda rather than an educational one."

He urged students, families and teachers to "stay strong."

"Change on this scale is a long-term effort, and progress won't be quick or linear. But over the past several years, America's educators have put the pieces in place for generational change. That is profound and powerful," he said.

Peggy Carr, acting commissioner of the National Center for Education Statistics, said in another teleconference call with reporters that it is not known whether the declines in achievement will continue over the long term.

"I think we need to be cautious and ... wait to see what will happen in 2017," Carr said about the next administration of the test. "One downturn does not a trend make," Carr added later.

While the National Assessment is not directly tied to any particular set of education standards, studies show there is substantial overlap between the fourth- and eighth-grade tests and the Common Core standards, Carr said.

Still, she said, the assumption can't be made that the standards were implemented evenly and consistently throughout the country. That and other hypotheses on the test results are yet to be researched, she said.

William Bushaw, executive director of the National Assessment Governing Board, which sets policy for the test, said Tuesday that the test isn't meant to give information about specific students or schools but is meant to provide insight on how the nation's students are progressing.

The framework for the assessment is routinely evaluated by the National Assessment Governing Board, which convenes experts to determine what should be included, Bushaw said.

While Arkansas' fourth-grade average math score dropped, the average scores for the other tests stayed about the same as in 2013.

The fourth-grade reading score was 218, statistically unchanged from the 219 score in 2013 and below the stagnant national average of 221.

In the eighth grade, Arkansas students earned an average score of 259 in reading, statistically no different from the 262 average in 2013. The national average was 264, down from 266.

While the percentages of Arkansas students scoring at proficient and advanced achievement levels on the national exams declined between 2013 and 2015, the 2015 achievement levels continued to exceed the results from the earlier days of the exam. In fourth-grade math, for example, the percentage of students scoring at the basic level and above was 79 percent, which was greater than the 55 percent in the 2000 administration of the test.

The test results are also reported in terms of student race, ethnicity, sex, and eligibility for subsidized school meals, which is an indication of family poverty.