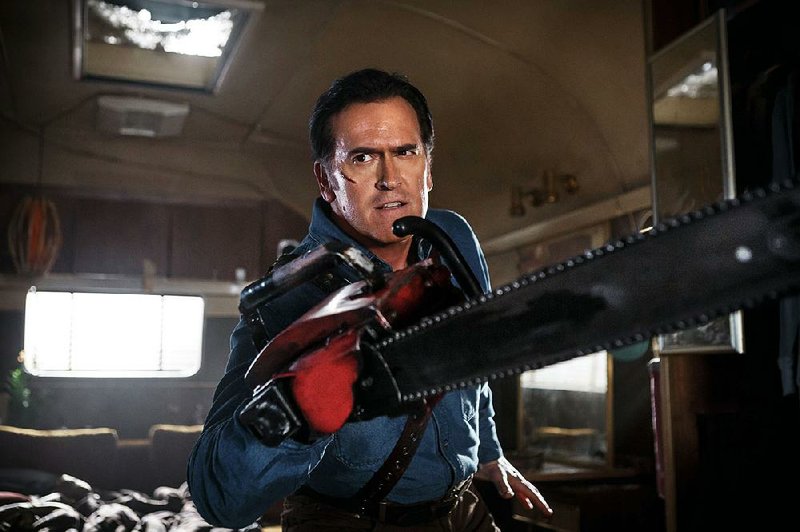 Bruce Campbell reprises his iconic role of Ash Williams, complete with his chain saw arm, when Ash vs. Evil Dead debuts at 8 p.m. Saturday on Starz.

Subscribers to Starz premium channel are in for a treat -- Ash is back and the dead are still just as evil.

Bloody? Raunchy? Campbell told the TV critics' summer press tour, "It would be silly of us to rip the fans off by doing a watered-down version of the series. The beauty of working with Starz is we have no content restriction whatsoever."

We have been warned.

Starz tells us, "Ash, aging Lothario and chain-saw-handed monster hunter, has spent 30 years avoiding responsibility and the terrors of the Evil Dead."

Now, thanks to a Deadite plague that threatens to destroy all of mankind, Ash is again battling ancient Kandarian demons that possess the bodies of the living (and other things) and turn them into Deadites. The demons can only be killed by dismemberment.

That explains the gore.

Even with its trademark quippy droll humor, the series will not be for the faint of heart. Ash's weapon of choice, after all, is his chain saw arm. For the record, it's a plain old Homelite XL that was used to lop off his possessed hand in The Evil Dead.

Ash vs. Evil Dead is the long-awaited follow-up to the low-budget 1981 horror classic The Evil Dead and its sequels, and comes from original creator/executive producer Sam Raimi.

A fourth film, titled simply Evil Dead (2013), starred Shiloh Fernandez as the lead and was produced by Raimi, Campbell and Rob Tapert.

"Most zombie films or TV shows have to do with the monsters being the stars," Raimi said at the summer press tour. "We have a show that stars a monster fighter, a hero, one of us. We can identify with him."

The 57-year-old Campbell, who had memorable roles on The Adventures of Brisco County, Jr. (1993-94) and Burn Notice (2007-13), also put in time on Rami's Hercules: The Legendary Journeys and Xena: Warrior Princess.

Cult fave bonus: Lucy Lawless, Xena herself, also stars in Ash vs. Evil Dead as Ruby Knowby, a "seductive and reclusive" figure determined to track down the source of the evil outbreaks. The only trouble is, she blames Ash for the massacre of her family 30 years ago and it's him she's closing in on.

Also in the cast:

Ray Santiago (Meet the Fockers) is Ash's co-worker at the ValueStop store, Pablo Simon Bolivar. He believes his destiny is to become Ash's sidekick. Starz labels the relationship as "Sancho Panza to Ash's Don Quixote."

Dana Delorenzo (A Very Harold & Kumar 3D Christmas) portrays Kelly Maxwell, another co-worker, who witnessed the Deadites destroy her family and everyone close to her. Hardened and cynical, she joins Ash and Pablo to get a little payback.

What can fans expect from the series? Santiago labels it "a new genre for television" and explains, "It's old-school horror with an element of comedy and subtle camp."

• Crossover event. Fans of Fox's Bones and Sleepy Hollow have a Halloween treat in store tonight. Or maybe it's evidence both series have jumped the shark.

Bones kicks it off with Part 1 at 7 p.m. ("The Resurrection in the Remains"). Sleepy Hollow's Abbie Mills and Ichabod Crane (Nicole Beharie, Tom Mison) visit The Jeffersonian to claim a 200-year-old headless corpse being investigated by Brennan (Emily Deschanel), Booth (David Boreanaz) and the gang.

Part 2 ("Dead Men Tell No Tales") picks up at 8 p.m. on Sleepy Hollow with Abbie and Crane trying to prove to Booth and Brennan that supernatural forces are at play after Pandora raises Red Coat General Howe. Both teams must find a way to save the town from the British Army of the undead.

This crossover may delight fans, but in my opinion it's a harmful plot device (especially for Bones) to have these worlds collide. Both episodes are rated TV-14 for language and violence.

• Grimm news. Season 5 of Grimm begins at 8 p.m. Friday on NBC. Here's the network teaser: "In the wake of his mother's beheading and Juliette's death, things have never been more chaotic for Nick. Nick must decide what type of person he wants to be, while also coming to grips with being tricked into fathering a child with his once-sworn enemy, Adalind."