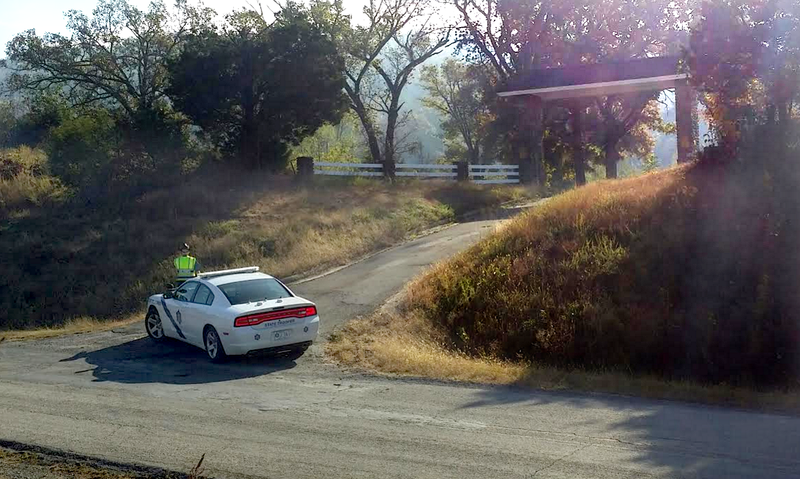 Road block at Old Cove and Van Horn Road in Pottsville, near where a small plane crashed, killing four people on board.

Four people have died in a plane crash in Pope County outside of Pottsville on Thursday morning, the Pope County sheriff's office said.

They were flying in a small aircraft that took off from nearby Russellville Airport and crashed in a residential yard off Van Horn Road, state Department of Emergency Management spokesman Kathy Wright said.

Lynn Lunsford, a spokesman for the Federal Aviation Administration, said the plane was a single-engine Beechcraft Bonanza and that the aircraft burned after impact.

In a news conference about 11:30 a.m., Pope County Sheriff Shane Jones said the site of the crash was not level ground.

Lunsford said he had no information about who was in the plane but said it was heading for Knoxville, Tenn.

"FAA investigators are on their way to the crash site, and the National Transportation Safety Board has been notified," Lunsford said in a statement. "The NTSB will be in charge of the investigation. The FAA will release the tail number of the aircraft as soon as we are able to confirm it."

Lunsford earlier Thursday said it's also unknown if anyone radioed any problems before the crash.

The Russellville airport does not have a control tower, he noted.

"So they would not have been talking to air traffic controllers," Lunsford said. "I don't know if made any broadcast was made on the local airport frequency."

The director of the state Department of Emergency Management was heading to the scene, Wright said. The FAA was also en route, the Pope County sheriff's office said in a statement.

Check back for updates and see Friday's Arkansas Democrat-Gazette for full details.