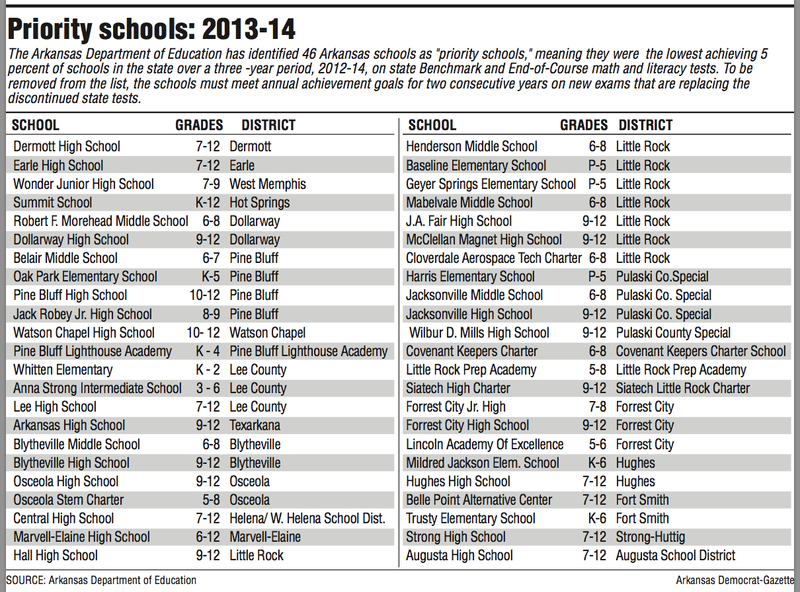 The Arkansas Department of Education has identified 46 schools as "priority" schools -- those scoring in the bottom 5 percent on state tests over three years.

The labeled schools include eight in the Little Rock School District, four in Pulaski County Special, four in Pine Bluff, three in Forrest City, and two in Fort Smith. Four independently operated public charter schools are also on the list. The performance period covers tests given in 2012, 2013 and 2014.

The priority schools, along with an additional 105 schools identified by the state as having the largest academic achievement gaps between student groups on the state tests, must now hire either full- or part-time school improvement specialists, evaluate their school and district leaders, submit to state monitoring, and take other steps over time to raise student performance.

Many of the labeled schools will be eligible for federal grants to support their efforts.

The Arkansas Education Department identified the priority schools and the achievement-gap schools -- called "focus schools" -- for the first time since November 2012. The agency did it to comply with Arkansas' federally approved school accountability system. A one-year extension of that state accountability system was approved in July by the U.S. Department of Education.

Elbert Harvey, the Arkansas department's coordinator of school improvement/standards assurance, said his agency will partner with the schools and their districts to change how they operate.

"I like to put it to the positive: We now know, so how are we going to help?" he said. "It's all about changing the systems so we can produce better outcomes for students. Now that we have a focus to it, we can prioritize our resources to help those districts and those buildings."

Arkansas' school accountability plan, intended to tailor achievement goals to each school, is a waiver to the federal No Child Left Behind Act of 2002 that called for 100 percent of students to achieve at proficiency, or grade level, in math and literacy by the 2013-14 school year.

The law required that schools not meeting the annual student achievement requirements be penalized. The U.S. Department of Education, at least partly in recognition that schools nationwide could not meet the 100 proficiency requirement by 2014, began approving state waivers to the federal law in 2012.

To be removed from Arkansas' lists, the labeled schools must meet annual achievement goals for two consecutive years.

Those annual goals, however, are currently in flux and need to be reset because of state changes in the past school year and again in this school year in the state-required tests given to students in math and literacy. After the spring 2014 tests, the state discontinued Benchmark and End-of-Course exams on which the priority and focus labels are based.

Students took the Partnership for Assessment of Readiness for College and Careers, or PARCC, exams this past school year. That will change to the ACT Aspire in grades three through 10 this school year.

"The federal government wanted consistent data, and the only consistent data we had was the Benchmark scores," Gotcher said. "It is a little frustrating for superintendents, because even in the 2013-14 school year we were testing using the Benchmark but we were teaching the [newer] Common Core State Standards."

The Benchmark and End-of-Course tests were based on the state's old set of education standards. The old tests were not aligned with the new math and English/language arts standards that were the basis for classroom instruction.

Gotcher said the federal agency did not accept the state's alternative proposals in regard to student data.

Typically, the state has established annual achievement goals for a school that are based on year-to-year student performance on the same tests. That won't be possible until the state's new tests are given in two or more consecutive years.

"What we need is enough consistent data for us to calculate relevant" achievement goals, Harvey said.

The state officials will seek advice from their standing committees of testing consultants and psychometricians as well as guidance from the U.S. Department of Education on how best to set the goals and the means for schools to be removed from the priority and focus lists.

"We'll be working on additional exit criteria for schools," Harvey said. "It would be test-result driven, but there might be some other avenues. That's what we want to explore" with the technical advisory committees.

Six of those schools -- all but Geyer Springs and Mabelvale -- were identified earlier by the state as "academically distressed" and were the basis for the state takeover of the district and dissolution of the elected School Board last January.

The academic distress program is the state's own school accountability system and is not connected to federal requirements.

Since the last time the Benchmark tests were given in the spring of 2014, Geyer Springs Elementary was converted into the Geyer Springs Gifted and Talented Academy, with a new principal and staff as well as a new academic program. And the principal and many of the staff members were replaced this summer at what is now Baseline Academy, which now emphasizes teaching early literacy skills, including skills for pupils learning English as a second language.

Many of the schools on the newly released lists are the same as the schools on the 2012 lists. Harvey said the state's request for an extension of its waiver plan includes new provisions for dealing with schools that have been priority schools for three or more years.

Central High in the Helena-West Helena School District is one of the repeat schools.

John Hoy starting his second year as the state-appointed superintendent of that district -- which is operating under state control for fiscal distress -- said Central has been a priority school for several years.

"That's not new news to us," Hoy said about the designation. "We didn't make the progress we needed to make to be removed from the list, so that is not anything that surprises me."

The state identified priority schools using a formula in which schools were ranked by their percentage of students proficient in math and in literacy in each of the three targeted years, with a ranking of 1 being the best. The rankings for each subject and school year were added together and a credit or weight was given to the 2014 results to benefit schools that may have been low-performing but demonstrated progress during the three years.

The schools with the greatest number of points were identified as priority schools.

The Education Department also identified 105 focus schools, which are the 10 percent of the state's public schools that had the largest achievement gaps between student groups on state Benchmark and End-of-Course exams over the three years: 2012, 2013 and 2014.

The gap that is measured is the one between the "Targeted Achievement Gap Group," or TAGG group, and the students who are not in that group -- the non-TAGG students.

The TAGG group is made up of students who are from low-income families, have disabilities or are learning English as a second language. To be removed from the list, schools must meet annual achievement requirements for both TAGG and non-TAGG students.

In addition to meeting achievement requirements for two consecutive years, priority and focus schools must also test 95 percent of their students and, if applicable, meet high school graduation goals.

The 185-page Arkansas school accountability waiver plan can be viewed on the agency's website: arkansased.gov/esea-flexibility.