Roads agency does a U-turn on 27 projects 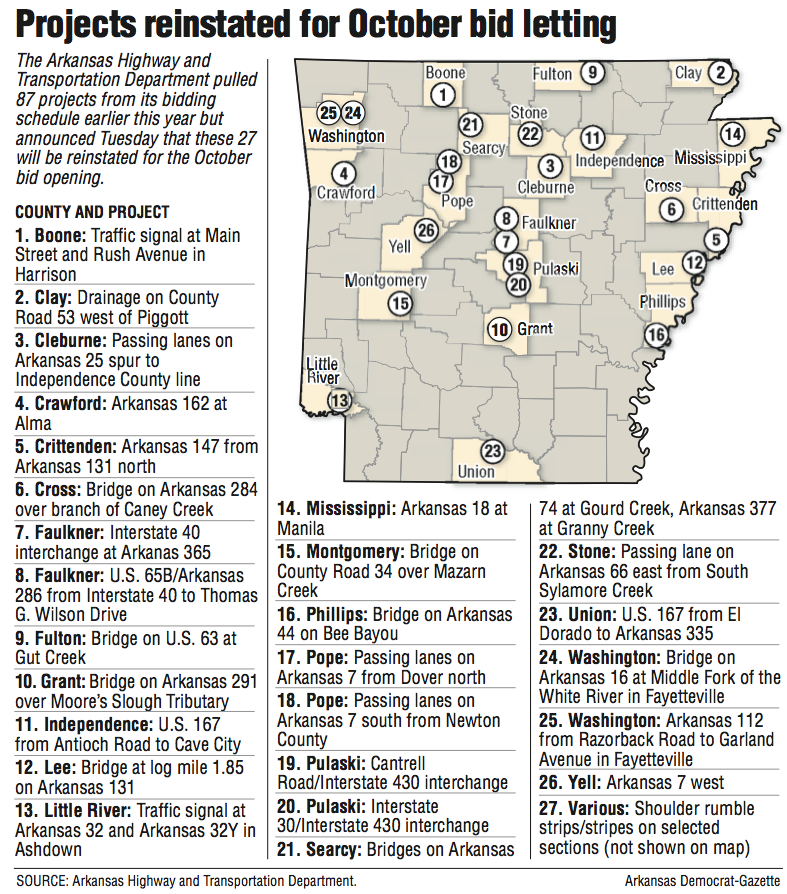 A listing and map of road projects reinstated for October bid letting.

CORRECTION: A spokesman for the Arkansas Highway and Transportation Department said the agency requested $35 million in state surplus money to help support and guarantee a resurfacing program for 2016. This article misstated the requested amount and the reason for the request.

The Arkansas Highway and Transportation Department announced Tuesday that 27 road and bridge projects, pulled from the agency's bidding schedule earlier this year, will be reinstated at its October bid-letting.

The 27 are about a third of the 87 projects worth $411 million that the department had pulled this year because of uncertainty over federal transportation funding.

Also, the Highway Department formally asked Gov. Asa Hutchinson for $36 million in state general-improvement money to fund the remaining roughly two-thirds of the 87 projects -- 49 resurfacing projects worth about $50 million and 11 other projects -- later this year, likely in December.

Even without additional action by Congress, payments to state transportation departments from the Federal Highway Administration are projected to continue until next spring, according to the department.

"We would like to thank Arkansas' congressional delegation who all voted in favor of [the extension] and provided the money needed to keep the [Highway Trust Fund] solvent for the next several months," Arkansas Highway Department Director Scott Bennett said in a statement issued Tuesday.

"This will allow some of the delayed projects to be phased back into bid-lettings scheduled for October, December and possibly February.

"This is great news for the state's economy," Bennett said.

Before the announcement, Dick Trammel of Rogers -- the chairman of the Arkansas Highway Commission -- indicated that all 87 projects will eventually go back into the bid-letting schedule. He made the remark at a Rotary Club meeting in Rogers, just as U.S. Sen. John Boozman, R-Ark., was concluding remarks as the club's featured speaker.

"We're so confident that you're going to come up with a solution, we're going to start letting contracts on the 87 contracts that were delayed earlier," Trammel said, referring to his optimism that Congress will pass a long-term highway funding bill.

For months, Congress has been unable to agree on a plan to fund federal road programs. Trammel said conversations with the state's congressional delegation have reassured state highway commissioners that a solution will be found.

"Congress has kicked the can down the road 34 times, and they don't want to do it again," Trammel said after the lunch meeting of the Rogers Noon Rotary Club.

The decision to reinstate the 27 projects overshadowed Tuesday's modest bid-letting, which the Highway Department had pared in July before Congress passed the most recent funding extension. The apparent low bids totaled about $53.6 million for the 14 projects. Two of the projects accounted for all but $5.2 million of the apparent low bids Tuesday.

A project to build a new bridge on Interstate 40 over Fishing Lake in St. Francis County got a low bid of $26.7 million from Manhattan Road and Bridge Co. of Tulsa. A bid of $21.6 million from APAC-Central Inc. of Fayetteville was the lowest submitted to widen a section of Interstate 49 from U.S. 412 to Wagon Wheel Road in Washington and Benton counties.

The low bids won't be final until department officials review them for accuracy and approve them.

"Both of those are very, very needed projects," said Tom Schueck, a highway commissioner from Little Rock. "Anybody that travels west on [Cantrell Road] knows it's an extremely difficult situation from I-430 west."

The second phase will widen I-430 from Stagecoach Road to the interchange and widen the ramps connecting the two interstates.

"That should've been done about three months ago, with the new traffic for the new shopping area on top of the traffic we already have there," Schueck said. "The quicker we can get that done, the better."

Schueck questioned whether any of the 87 projects should have been pulled at all.

"I thought we were being a little overly conservative," Schueck said. "We were trying to be frugal and very watchful of the state's money, and just maybe we went overboard. I'm just not sure."

But Bennett said the state Highway Department had no room for mistakes.

"With the threat of reduced or delayed federal fund reimbursements looming this fall, we opted to take the more fiscally conservative approach and not let projects to contract that we might have to suspend or cancel in the future because of the inability to make contractor payments," he said.

In case of a slowdown in federal payments, the department didn't want to have to suspend work that was already underway, he said. It also wanted to cover the bond payments for the state's $1.2 billion interstate repair program and didn't want to lay off any personnel, Bennett said.

Transportation agencies in other states have various sources of funding, including lines of credit from their state general revenue funds from which to draw, to keep projects going. Those sources are not available to the Arkansas Highway Department, he said.

"We have no way of raising revenue to offset the reduction, delay or loss of federal dollars that Arkansas depends upon for 70 percent of its highway construction program."

Arkansas and four other states pulled a total of $1.5 billion in construction projects, according to the American Association of State Transportation Officials.

On Tuesday, the state's highway contractors weren't second-guessing the department's earlier decision to delay the 87 projects, though they said the decision to now reinstate some of them is bittersweet.

"Our people, needless to say, are excited about the opportunity to bid on the work," said Richard Hedgecock, the executive director of the Arkansas chapter of Associated General Contractors, which represents the contracting industry.

"The timing is unfortunate because our people have lost an entire construction season. But we're thrilled they're putting the projects back."

If Congress doesn't act, Arkansas and other states, by spring, could find themselves in a situation similar to this year's.

A spokesman for the governor was noncommittal about whether Hutchinson will grant the department's request for $36 million from the state's general improvement fund to help pay for the overlay program.

Bennett said using state money to fund resurfacing projects, which extend the lifetime of pavement, is more effective in Arkansas than using federal money because not all highways in the state can meet the federal-standards requirements.

"The governor has received Mr. Bennett's request," said Davis, the governor's spokesman. "He will take a look at it and study it, as he does with all requests. There's no timeline on when a decision will be made."

Information for this article was contributed by Doug Thompson of the NWA Democrat-Gazette.

Print Headline: Roads agency does a U-turn on 27 projects