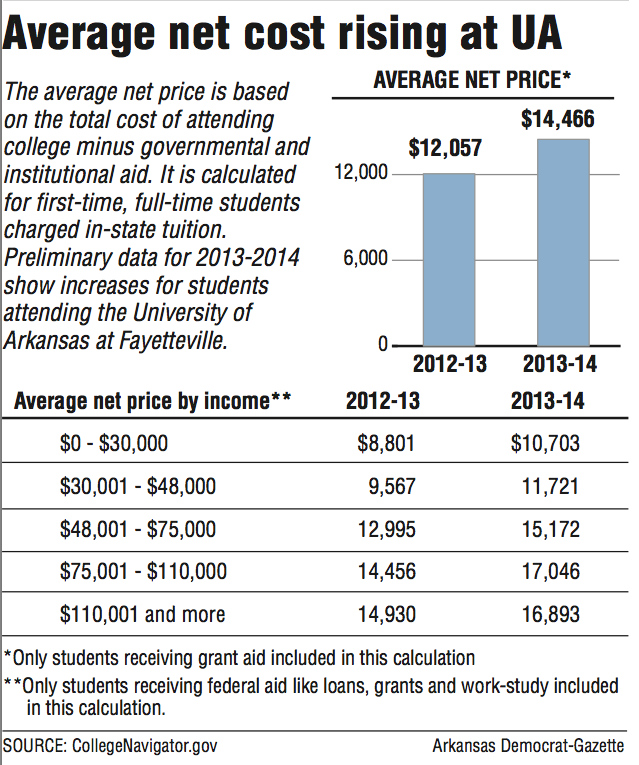 Graph and information about average net cost at UA.

FAYETTEVILLE -- Compared with peer schools in neighboring states, the University of Arkansas at Fayetteville remains relatively low in its average net price, according to an expenses-minus-grant-aid calculation featured in the Obama administration's College Scorecard tool for helping students select a college. 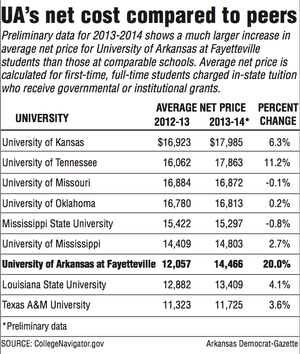 But the average net price increased by 20 percent in one year for the state's largest university, according to preliminary data for the 2013-14 academic year, rising to $14,466 from $12,057 the previous year. The price spike greatly outpaced year-to-year changes at similar schools in nearby states, though other public universities in Arkansas also saw sharp increases.

A reduction in the state's Academic Challenge Scholarship awards -- commonly referred to as lottery scholarships because proceeds from the state's lottery provide the primary source of funding for the grants -- at least partially explains the rise in average net price, said Suzanne McCray, UA's vice provost for enrollment management and dean of admissions.

In the fall of 2013, 1,802 out of 2,172 in-state freshmen who entered UA seeking a degree received Academic Challenge Scholarships, according to McCray. The proportion would have been higher, McCray said, but another 160 students received other state scholarships that made them ineligible for the lottery scholarship award.

Details of UA's average net price calculation will be published later this year, but the figure is based only on first-time, full-time students and, for public institutions, those paying in-state tuition.

In contrast, the state's Academic Challenge Scholarship now increases award amounts as students make progress through a four-year college. Students who entered college this academic year are eligible in their second year of college for $3,000 awards, $4,000 in their third year, and $5,000 in their fourth year.

In both types of calculations, the average net price takes into account more than tuition and fees, factoring in costs like books and cost-of-living expenses. It then subtracts institutional scholarship or grant awards as well as governmental grants, like Pell grants awarded to low-income students.

The formula does not factor in private and employer scholarships, which nationally made up about 13 percent of all grant dollars supporting postsecondary students in 2013-14, according to The College Board, a nonprofit organization.

For average net price as featured in the College Scorecard -- a single number for each college and university -- students are excluded from the calculation if they do not receive any grant or scholarship aid.

In calculating average net price by income, a different, though perhaps overlapping, group of students is used. Included are students receiving a certain kind of federal aid, known as Title IV aid. This type of aid includes federal loans.

But while a student receiving only loans is included in the pool used to calculate average net price by income, the loan amounts never figure into the calculation, which continues to reflect a student's expenses minus grant aid.

The average net price by income shows poorer students paying less on average than wealthier peers at UA. It also shows that the poorest students -- those with families earning $30,000 or less annually -- saw especially sharp increases in average net price in 2013-14, which rose by 21.6 percent to $10,703 compared with $8,801 a year earlier.

As far as the effects on UA's lowest-income students, "I'm sure this is something that's considered as tuition costs go up," said McCray, adding that she expects that data for the 2014-15 academic year to show a much lower percentage rate of increase. That data likely won't be available until 2016.

The Academic Challenge Scholarship is a form of merit-based aid, meaning that a student's financial need is not taken into account when awards are issued.

"We need to question ourselves," said state Sen. Joyce Elliott, a Democrat from Little Rock. "Do we need to concentrate on more need-based assistance at the state level?"

Elliott also serves on a commission studying college affordability that has been put together by the Southern Regional Education Board, a nonprofit organization based in Atlanta.

The board counts 16 states as members and is currently led by Arkansas Gov. Asa Hutchinson.

"I don't think it's necessarily a political issue," Elliott said about devoting funds for need-based aid rather than merit-based aid. For the commission, "that has been a big focus of what we've been studying," she said.

The board's Commission on College Affordability in the South launched in October of last year, and Elliott said the group will likely release a report by the end of the year.