Arkansas the place for Agim 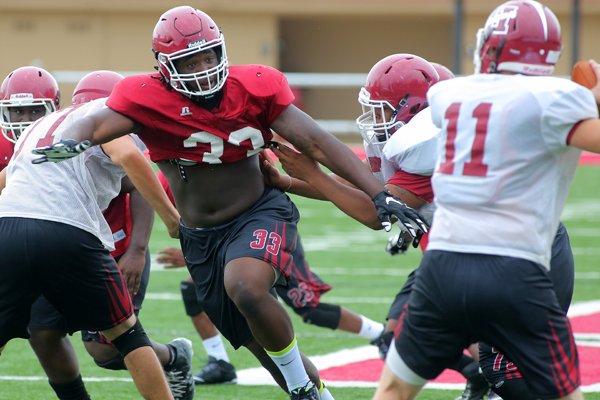 Hope defensive end McTelvin Agim crashes through the line in pursuit of the quarterback during practice.

Arkansas had plenty of reasons to celebrate Saturday.

On the same day the 18th-ranked Razorbacks opened their season with a 48-13 victory over Texas-El Paso, Arkansas found out the state's top recruit has decided to be a Razorback.

Hope defensive end McTelvin Agim orally committed to Arkansas, choosing the Razorbacks over Ole Miss, Texas A&M and Baylor during a news conference at a family reunion in Texarkana, Texas.

Agim, 6-3, 268 pounds, 4.62 seconds in the 40-yard dash, is one of the more highly regarded defensive prospects to come out of the state. Texas, Alabama, Auburn, Oklahoma and Clemson were among other notable programs that offered scholarships.

"I felt it was the best place for me as an individual and as a man," Agim said of his decision to commit to Arkansas. "I'm cool with the coaching staff. They made me feel like home there. I believe in Coach [Bret] Bielema, and I believe in what he's doing."

ESPN rates Agim as a five-star prospect, the nation's No. 9 overall prospect and the No. 2 defensive end. His overall ranking is the second-highest for an Arkansas athlete since ESPN started ranking prospects. Only Little Rock Christian running back Michael Dyer was ranked higher, when he was the No. 5 overall recruit in the 2010 class

Agim said he was close to his grandmother, Charlie B. McGraw, who passed away four years ago and that he wanted to make his announcement at her house.

"She was really my everything, and when she passed away it kind of hurt me because she was really the one that was there," said Agim, who plans to play in the Under Armour All-American game in January in Florida. "It was kind of hard, but you have to bounce back from everything."

Agim was a member of the Arkansas Democrat-Gazette's 2015 All-Arkansas Preps preseason team after recording 72 tackles, 22 sacks, 13 pass knockdowns, 6 forced fumbles and 3 fumble recoveries as a junior. He was the Democrat-Gazette's Sophomore Defensive Player of the Year in 2013 after recording 77 tackles, including 32 tackles for loss and 16 sacks.

The defensive end said he plans to try to recruit others to Arkansas, but he won't twist their arms.

"They have to believe in Coach B," he said. "Me committing doesn't mean everybody is just going to follow. They have to feel at home. I don't want anyone that doesn't feel like it's their home to come in because it won't work out."

"I think it's a great decision," Turley said. "I think he really likes what Coach Bielema has done as far as strengthening the offensive and defensive lines. He feels like going against one of the best offensive lines in the country every day will only make him a better defensive player.

"I think he has a chance to be one of the premier defensive players in college football."