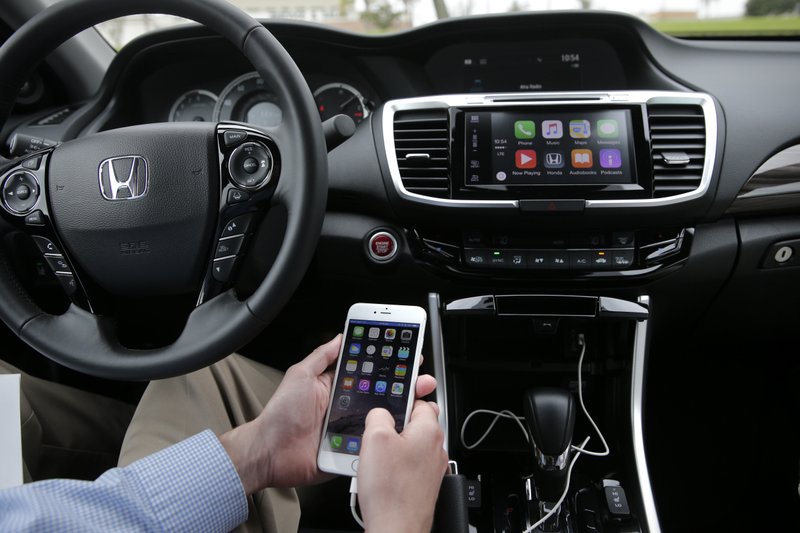 In this Thursday, Aug. 20, 2015 photo, Chris Martin from Honda North America demonstrates Apple CarPlay in Torrance, Calif. Playing deejay with voice commands will get easier for more Americans this fall as some best-selling cars get updated with software that integrates smartphones into the dashboard.

LOS ANGELES -- Playing disc jockey with voice commands will get easier for more Americans this fall as some best-selling cars get updated with software that integrates smartphones into the dashboard.

With the 2016 model year, Apple's CarPlay and Google's Android Auto will turn cars as affordable as a base model Chevy Spark into rolling robotic assistants that give directions to restaurants or play the latest hits with commands as simple as "Play Ellie Goulding."

The Associated Press recently tried out both systems on a 2016 Honda Accord. As with phones, voice-activated car technologies don't always work as intended, bringing up inaccurate directions or failing to open an app, for example. But overall the two systems are convenient and incredibly intuitive.

Both CarPlay and Android Auto should give drivers more time to keep their eyes on the road compared with the automakers' own voice systems, which can require multiple steps and looking at on-screen menus. Still, as with any system that requires driver input, there are concerns about distraction.

"Anything that takes your attention away from the task of driving is not something you want to engage in," said Kathy Lane, a spokesman for the National Safety Council, a nonprofit organization created by Congress to promote safety.

Consumers increasingly want to use their smartphone while driving -- without running afoul of the law. For the last few years, drivers of most new cars have been able to speak to their phones and have audio stream through a car's speakers using the nearly ubiquitous Bluetooth wireless standard. However, doing so can require fiddling with the phone, like holding down the home button first.

Both CarPlay and Android Auto allow voice commands to be turned on with a touch of a steering wheel button.

One wrinkle is that Apple reserves voice commands for its proprietary apps -- phone, maps, texts and Apple Music. That means the magical ability for iPhone users to ask the digital voice assistant Siri such complicated tasks as "play the top song from 2011" will only work if they are paying $10 a month for Apple Music.

The less restrictive Android Auto will allow users to use apps like Spotify as long as they specifically tell it to "play Aerosmith on Spotify," or set Spotify as the default music app. A Spotify subscription also costs $10 a month.

The 2016 Honda Accord EX with manual transmission is the lowest trim on which Honda is offering CarPlay and Android Auto support. At $25,480, the EX is $1,315 pricier than the Sport trim, and includes things like a moon roof, keyless remote and a better touch-screen display. Volkswagen's entry level 2016 Jetta 1.4T at $17,680 offers CarPlay and Android Auto as part of a $995 technology upgrade that includes a larger touch screen and rearview camera.

Some automakers believe that such features could motivate buyers to move up the trim level, rather than to more expensive models.

General Motors stands alone in offering CarPlay and Android Auto as standard equipment on cars as inexpensive as the Spark -- the 2015 version retails for upward of $12,170 -- and as high-volume as its Chevrolet Cruze and Malibu sedans and Silverado trucks.

"CarPlay and Android Auto are about to really hit the mainstream," says Kelly Blue Book senior analyst Karl Brauer. "We're talking about some 40 to 50 models that'll have it in probably the next 12 months or less, which is maybe about 20 percent of the entire car market."

IHS analyst Colin Bird predicts that automakers in the U.S. and Canada will sell a modest 497,000 cars with CarPlay, Android Auto or both this year. The number should jump to 5 million in 2018 and nearly 10 million in 2020.

Information for this article was contributed by Dee-Ann Durbin of The Associated Press.