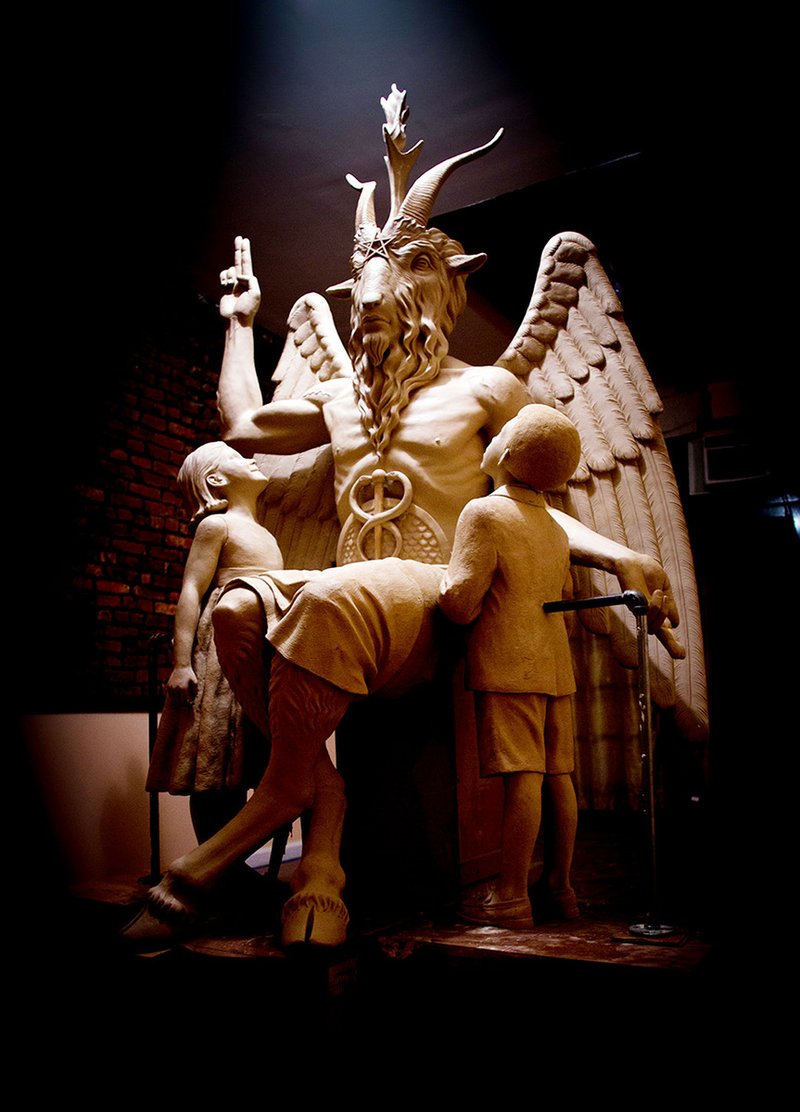 This 2014 photo provided by The Satanic Temple shows a bronze Baphomet, which depicts Satan as a goat-headed figure surrounded by two children. The Satanic Temple, a group advocating the separation of church and state, is proposing that the statue be placed outside the Arkansas Statehouse after their first choice of the Oklahoma Capitol grounds was scuttled in 2015 by a state Supreme Court ruling barring all religious monuments. ( The Satanic Temple via AP )

The out-of-state group looking to place a giant goat-demon statue on the state Capitol grounds officially submitted its request with the secretary of state's office Tuesday.

In their effort to place an 8 1/2-foot-high, 1.5-ton bronze goat named Baphomet outside the Capitol, the Satanic Temple urged Secretary of State Mark Martin, the Capitol Arts and Grounds Commission, and legislators to kindly consider their demon as an educational monument, one that illustrates the history of constitutional protections in U.S. law.

In the letter, which was dated Aug. 31, the group's co-founder, Malcolm Jarry, argued that his group's monument has as much -- if not more -- historical value than a planned monument of the Ten Commandments, a monument endorsed by lawmakers with the passage of Senate Bill 939 during the past legislative session.

"The Baphomet statue we would like to contribute shall fulfill the same intended purposes [as the Ten Commandments] because it is also 'an important component of the moral foundation of the laws and legal system of the United States of America and the State of Arkansas,'" Jarry wrote, quoting some of the language from the bill.

"Baphomet was a central figure in the forced confessions of the Knights Templar in France, and that tradition of wrongful prosecution for supernatural crimes later famously resurfaced in colonial Massachusetts. It was in response to the witch trials in Salem that American jurisprudence emerged."

Baphomet, a winged goat-faced creature, is often associated with paganism or the occult.

Martin's spokesman, Chris Powell, said that Martin's office is reviewing the letter and will respond by the end of the week.

The Satanic Temple is one of many groups that took an interest in placing a privately financed statue on the Capitol grounds after SB939 was signed into law as Act 1231 on April 8.

Critics of the proposed Ten Commandments statue argue that such a monument violates the First Amendment and is tantamount to an endorsement by the state of Christianity over other religions.

The law's sponsors, Sen. Jason Rapert, R-Bigelow, and Rep. Kim Hammer, R-Benton, argued that the monument -- which will be paid for by private donors -- is of historic value and acknowledges the role that the biblical God's laws played in the evolution of state and federal law.

So far, Powell said, there has been little movement on erecting the Ten Commandments monument. He said he understood that the group financing the project is still in the design phase.

In late August, Martin's office denied a request from a Hindu group to install a monkey-faced god monument, saying that the group didn't submit its proposal through the Capitol Arts and Grounds Commission, which has authority over what is placed on the Capitol grounds and is chaired by Martin.

A few days later, an atheist group based out of Wisconsin, the Freedom From Religion Foundation, submitted its own proposal to the commission and Martin's office, saying that if the Ten Commandments statue goes up, they will seek to install a monument that states "There are no gods."

Powell said Tuesday that his office is still drafting a response to the Wisconsin group but also pointed out that the monument approval process through the Capitol Arts and Grounds Commission can take years.

Maintaining that Baphomet is an homage to the legacies of due process and the protection of minorities from the "tyranny of mob rule," Jarry argued that lawmakers should welcome the goat demon to the Capitol.

"Given the stated intent by the Arkansas State Legislature for erecting the Ten Commandments monument, and the greater effectiveness by which our statue Baphomet would serve to meet those purposes, we anticipate expeditious approval for our request," Jarry wrote. "Should our offer of contribution be rejected, the reason will appear to the Arkansas electorate to have been based on a desire [to] endorse the religious components of the Ten Commandments."

Rapert said that Jarry's group can request whatever it wants but said he doubted Arkansans would "stand for something so outrageous" as a demonic goat on the Capitol grounds.

"If these people want to file legislation and think they can get the vote support to put that up, it's a free country ... but they'd have to wait until 2017 to do it," Rapert said, referring to the year that the Arkansas Legislature is scheduled to meet for its next regular session. "They're free to make whatever arguments they want."

Should a satanic statue be allowed on the grounds of the Arkansas state Capitol?