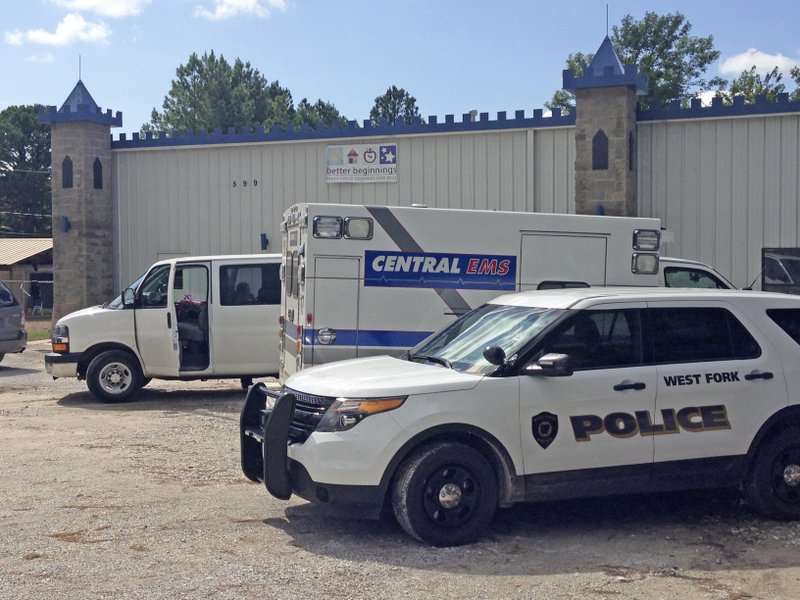 Emergency vehicles sit outside Growing God’s Kingdom preschool in West Fork, where authorities said a toddler was left in a school van for several hours Wednesday.

Police Chief Bryan Watts said the child was in the van from about 9:30 a.m. to 2:30 p.m., when police and an ambulance were called.

Watts said the child, who had been strapped into a car seat, wasn't injured. He said the girl was conscious and talked to paramedics when they arrived.

"We're very blessed that it was a little cooler today and the van was parked in the shade," Watts said. "If it had been much warmer, I don't think she would have survived it."

State Rep. Justin Harris, R-West Fork, co-owner of the preschool, said the "bus driver" didn't notice the child was still on the van after other children got off.

Harris said it was a cool, cloudy day, and the child's body temperature was 97 degrees when paramedics arrived.

"So thankful to God that it was a good day," he said.

Harris said the school has "procedures in place" to prevent such incidents from occurring.

Watts said the van has an alarm at the back, and drivers are supposed to walk to the back and turn off the alarm after each run. One of the reasons for this is to make sure all the children are off the vehicle.

The driver told police that she walked to the back of the van on Wednesday morning and turned off the alarm but didn't see the child, Watts said.

Watts said the child was found in the van when school officials began taking kids home on Wednesday afternoon.

Watts said his office is investigating, but no criminal charges have been filed. He said neither the name of the child nor the driver was being released Wednesday.

Watts said the incident had been reported to the Arkansas Department of Human Services.

Amy Webb, a spokesman for the Human Services Department, said a preliminary report to the agency indicated the child was found on the van at 1:30 p.m., instead of 2:30 p.m.

In addition to the alarm on the van, Webb said a roster of children is supposed to be checked by the driver and by someone at the facility.

"It's my understanding that the van driver was terminated," Webb said.

Childcare licensing staff from the Human Services Department will be at Growing God's Kingdom today to investigate, Webb said.

Harris came under fire after reports by the Arkansas Times in March revealed that he and his wife, Marsha, had "re-homed" an adopted 5-year-old daughter to a man who later raped her. "Re-homing" means giving a child to another family without going through state agencies such as the Human Services Department.

Eric Cameron Francis is serving a 40-year prison sentence after being convicted of two counts of sexual assault in the case.

Harris has said he's not running for re-election to the state House next year.

Late Wednesday afternoon, Harris released a statement regarding Wednesday's events: "It is the policy of Growing God's Kingdom to follow all federal, state and local laws and regulations. The incident which occurred today is under an internal review to determine the facts and be sure that all staff members at Growing God's Kingdom are complying with our policies and procedures.

"We take the physical safety of every child in our care very seriously and will take any steps necessary to be sure that all of our children are provided a safe and loving environment to learn," the statement adds.