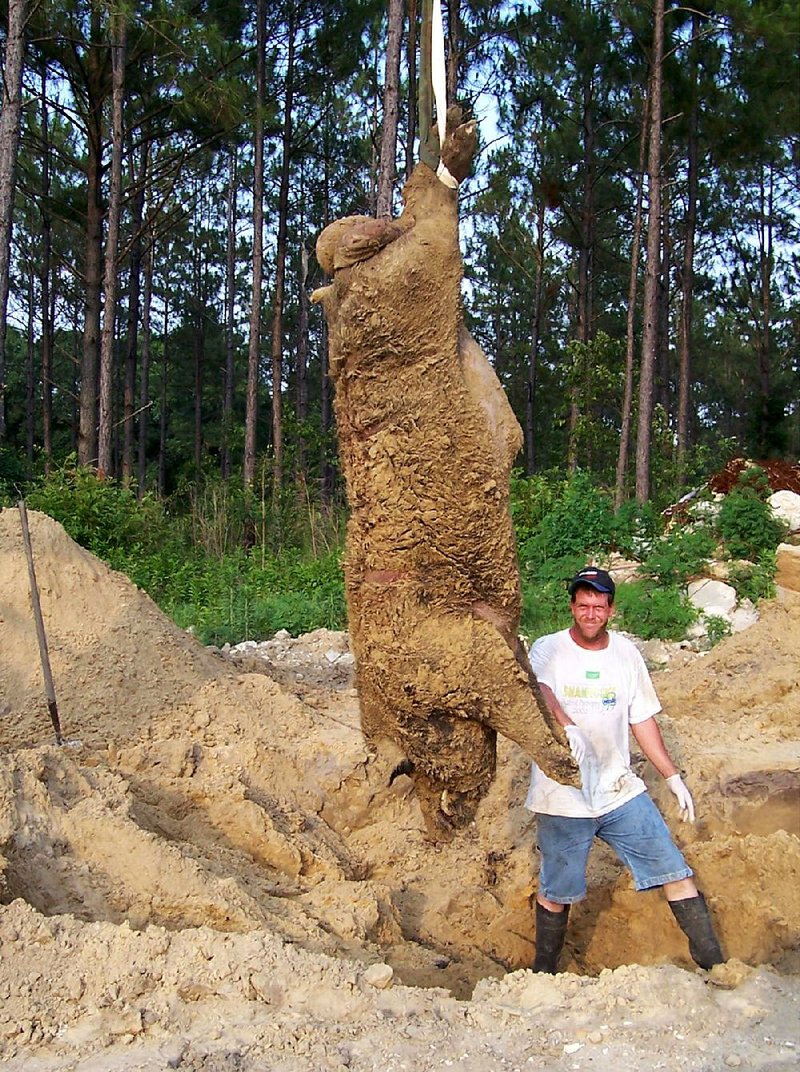 Darl Bundren of Paron poses with a half-ton feral hog he shot on his land recently. The Russian boar hybrid had been terrorizing the community for weeks. (Disclaimer: Fayetteville-born Otus the Head Cat's award-winning column of 👉 humorous fabrication 👈)

I'm really irritated. First of all, we only get one lousy Razorbacks game in Little Rock these days and it's one of those stupid early practice games that we win 56-3. Now I read that Obama and his PETA cronies have banned Tush the mascot! I was planning on taking my grandson to the game, but without Tush, it won't be worth it.

It was wholly a pleasure to hear from you, even though I must now spend an inordinate amount of precious column space correcting a number of misconceptions under which you are laboring, causing undo stress, high blood pressure and, if unchecked, possibly leading to serious health concerns.

First of all, scheduling so-called "guaranteed" games early in the season is a time-honored tradition that allows a team to work out all the kinks before tackling tougher opponents.

Just ask the Arkansas State Red Wolves, who were paid a hefty $1.3 million to travel to California to get stomped on by Southern Cal, 55-6 last week. It was ASU's worst whuppin' since 2004, but the payday made it worth it.

By comparison, the Razorbacks got a bargain last week with the University of Texas at El Paso. The Miners were paid a paltry $900,000 to be romped upon to the tune of 48-13 up in Fayetteville.

To keep it in perspective, last week No. 15 Ole Miss extirpated Tennessee Martin 76-33, costing the Rebels a laughable $349.95 per point scored.

Do not for one moment feel complacent. This is the same Rockets team that handed Arkansas State a humiliating 63-44 loss in last season's GoDaddy Bowl. It's the same team favored to win the Mid-America West title this year.

The Rockets went 7-6 last season, the same record as the Razorbacks. They'll take the field full of spit and vinegar after their opener last week versus the highly regarded Stony Brook (N.Y.) Seawolves was called due to lightning, with the Rockets behind 16-7.

In other words, it may look like a practice game on paper, but nothing is guaranteed. The Hogs are only 21-point favorites (down from 35 last week), and that's because Toledo star running back Kareem Hunt is suspended for the game for "violations of team rules." Whatever that means.

Secondly, the name of the former Razorbacks live mascot is Tusk, not Tush. Granted, Tusk has a tush, but he's better known for his razor-sharp tusks. The mascot's name was Ragnar until the band Fleetwood Mac wrote a song about him titled "Tusk" in 1979. The mascot has been named Tusk ever since. Until this season.

Beginning in 2002, the feral razorback mascots were replaced with the more docile pure-bred Russian boars. Although they somewhat resemble wild razorbacks, Russian boars tend to grow fat and lazy on a diet of corn, grapes and green apples.

In fact, Tusk IV was looking a little, well, porcine, when he was banned from games this season. His banishment has nothing to do with his gargantuan gammons. It has to do with the popular Russian boar piglet industry that has grown up in the state.

Piglets are adorable and, as with bunnies and chicks at Easter, are frequently bought by well-meaning parents for their children's amusement. Thousands of little Tusks are sold each year during football season.

That amusement ends when the shoat hits 200 pounds. Then it's dumped in the woods, where it mates with feral sows. They produce hogzilla hybrids that grow up to a half ton and, being omnivorous, terrorize entire communities (see photo).

Until next time, Kalaka reminds you that Tusk has been replaced by a miniature pot-bellied pig named Bocephus. It's for the best. And President Obama had nothing to do with it.