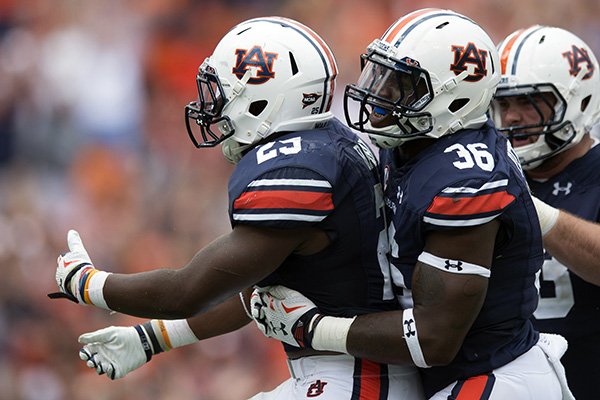 Auburn Tigers running back Peyton Barber (25) celebrates with full back Kamryn Pettway (36) after scoring the winning touchdown during overtime of an NCAA college football game against Jacksonville State, Saturday, Sept. 12, 2015, in at Jordan-Hare Stadium in Auburn, Ala. (Albert Cesare/The Montgomery Advertiser via AP)

NEW YORK (AP) - No. 6 Auburn escaped defeat, if not embarrassment, and No. 9 Notre Dame pulled out a wild one, but still had a huge loss.

At least the Tigers and Fighting Irish won. No. 18 Arkansas was not so lucky.

The Tigers needed overtime to beat FCS Jacksonville State 27-20, a win that took a lot of luster off a team that came into this season as one of the favorites in the Southeastern Conference.

Following a week in which every SEC West team was ranked in the AP Top 25, and 10 SEC teams overall made it into the poll, Auburn and Arkansas gave those who believe the SEC is overrated plenty of material to talk about.

"We've got some growing up to do; there's no doubt about that," coach Gus Malzahn said.

Arkansas also has some work to do. After coach Bret Bielema criticized No. 1 Ohio State's schedule earlier in the week, the Razorbacks lost 16-12 to Toledo. The Rockets are one of the top teams in the Mid-American Conference. The Buckeyes, who were sluggish but still beat Hawaii 38-0, play two MAC contenders over the next two weeks in Northern Illinois and Western Michigan.

Even with the ugly win, if Auburn can fix Johnson, all its goals are still possible.

Notre Dame can say the same, but the road will be tougher after losing quarterback Malik Zaire to a broken ankle in a 34-27 victory in Charlottesville, Virginia. Without Zaire, DeShone Kizer came off the bench and threw a 40-yard TD to Will Fuller with 12 seconds left to give Notre Dame the lead.

No doubt it was a win that Irish fans will remember forever, but losing Zaire could be a mighty blow. Kizer, a sophomore, was Notre Dame's third-string quarterback until Everett Golson transferred after spring practice. He moved into the backup role in the preseason, ahead of freshman Brandon Wimbush.