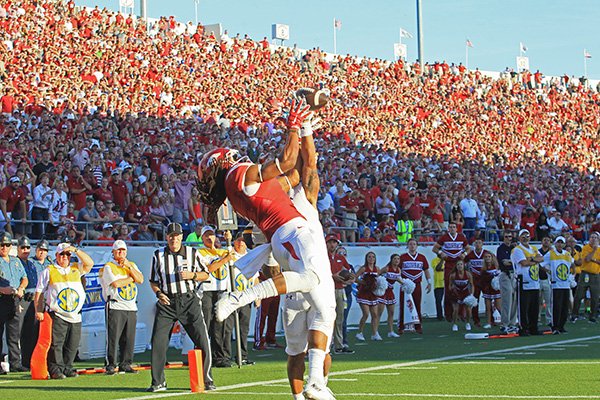 Arkansas receiver Keon Hatcher goes up for a pass during the fourth quarter of a game against Toledo on Saturday, Sept. 12, 2015, at War Memorial Stadium in Little Rock.

Arkansas has won more than 70 percent of its games in Little Rock's War Memorial Stadium going back to 1948 when the facility opened, but lately it's been a chamber of horrors for the Razorbacks.

Toledo's 16-12 victory over Arkansas on Saturday dropped the Razorbacks to 1-5 in War Memorial Stadium since 2012.

The Razorbacks' only victory in that span came over a Football Championship Subdivision team when they beat Samford 31-21 in 2013.

Arkansas' other losses in War Memorial Stadium the past four seasons in addition to Saturday's setback came against Louisiana-Monroe 34-31 in overtime and Ole Miss 30-27 in 2012; Mississippi State 24-17 in overtime in 2013; and Georgia 45-32 last season.

"I'm very embarrassed for our fans and everyone who traveled here today and for all the people in Little Rock," Arkansas Coach Bret Bielema said. "To not play well here for a second year in a row is frustrating and something I know we're going to have to correct."

The Razorbacks' last victory in Little Rock against a Football Bowl Subdivision team was in 2011 when they beat Mississippi State 44-17.

Arkansas receiver Eric Hawkins was moving his limbs, Coach Bret Bielema said, after being taken off the field on a stretcher in the fourth quarter.

As a precaution, medical personnel kept Hawkins' head and body immobilized after he took a hard hit by two Toledo players on a kickoff return.

"When I walked out to see [Hawkins], he was moving his hands and extremities and stuff like that," Bielema said. "He had some pain in his stomach and was a little light-headed."

Starting left offensive tackle Denver Kirkland had the leave the game holding his right arm on the Razorbacks' final series. Bielema said he didn't know the extent of Kirkland's injury.

Bielema said starting tailback Alex Collins, who carried 20 times for 54 yards, was ill with an infection during the week and spent Wednesday night in the hospital.

Tailback Kody Walker, Collins' backup, didn't play in the second half after jamming a thumb.

"We didn't think he could carry the football in the third and fourth quarter," Bielema said.

Receivers Jared Cornelius and Dominque Reed were suspended for the first half because they were late for a team meeting this week.

Receiver Jojo Robinson, a redshirt freshman who was suspended last week, played Saturday but didn't have any catches.

Bret Bielema fell to 35-3 in regular-season nonconference games. Saturday's loss was his first nonconference home loss in 10 seasons as a head coach at Wisconsin and Arkansas.

Arkansas quarterback Brandon Allen's last two interceptions have been in the end zone.

His streak of passes without a turnover ended at 134 when Toledo safety Dejuan Rogers made an interception in the end zone with 9:18 left in the third quarter.

Allen's last interception was last season by Mississippi State's Will Remond with 15 seconds left as the Bulldogs held on to win 17-10.

It appeared Jared Cornelius had given Arkansas the lead in the third quarter with a 58-yard punt return for a touchdown, but the score was called back because of a holding penalty against Eric Hawkins.

Arkansas hasn't had a punt return for a touchdown since Joe Adams' 51-yarder against Kansas State in the Cotton Bowl to end the 2011 season.

Skipper does it again

Arkansas offensive tackle Dan Skipper, a 6-10 junior, blocked his fifth field-goal attempt when he knocked down a 26-yard attempt by Jameson Vest in the second quarter.

Last season Skipper blocked a field-goal attempt by Missouri and in 2013 he blocked attempts by Rutgers, Florida and Mississippi State.

Arkansas safety Rohan Gaines lost an interception and the Razorbacks lost 14 yards in field position after a replay booth review in the second quarter.

The call on the field was that Gaines had intercepted a pass, which went off teammate Henre Toliver's helmet, at the Arkansas 42.

After the call was overturned by the replay official, Toledo punted out of bounds at the Arkansas 28.

Ledbetter started in place of sophomore Tevin Beanum, who received plenty of reps in the defensive line rotation.

The Razorbacks went with five defensive backs to open the game against Toledo's pass-heavy offense, giving sophomore nickel back Henre Toliver the start in place of sophomore outside linebacker Khalia Hackett.

Toledo, which plays in the Mid-American Conferences, earned its first victory against an SEC team in four tries. The Rockets had been 0-3, losing at Florida and Missouri in 2013 and at home to Missouri last season.