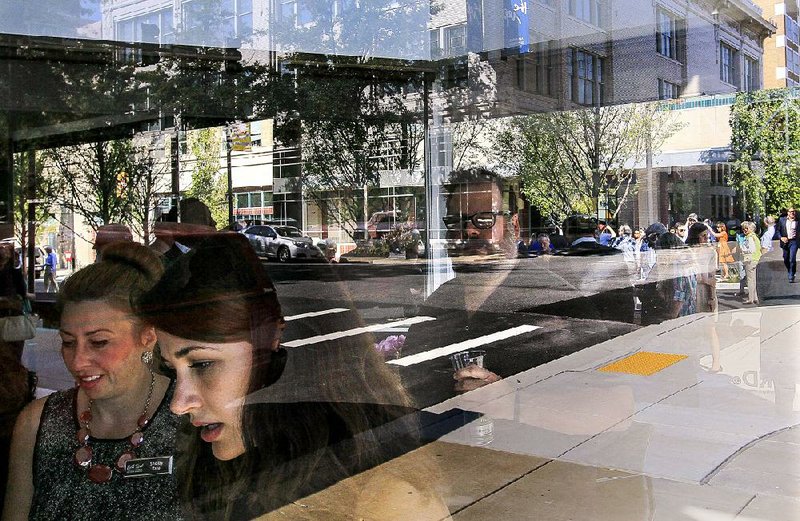 Passers-by are reflected in the windows along the Main Street Creative Corridor during an event Monday that marked the completion of the Little Rock project’s first phase. ( Benjamin Krain)

The water quality project that turned Little Rock's Main Street into a construction zone is wrapping up a year and a half later at a cost higher than originally anticipated. 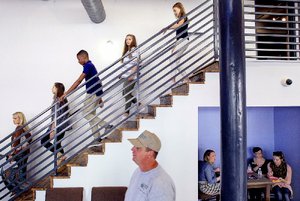 Photo by Benjamin Krain
Visitors tour the new theater space for The Rep, as well as other features of Little Rock’s Main Street Creative Corridor on Monday.

Officials billed the water runoff project and street redesign, which began in March 2014, as a months-long $1.6 million job. Some unplanned costs have been incurred and now the construction alone will be about $2 million. Engineering, design and signs add another $271,500 to the cost.

That amount is still within the authorized project budget approved by the Little Rock Board of Directors.

"We always try to get a contingency allocated when we do this kind of work," said Mike Hood, the city's civil engineering manager. "You never know what's going to happen. We're digging in unknown places. It's just the facts of life. The board authorized $1.99 million [for construction], and that included the contingency. Eighty percent of that was the bid amount and we spent all the contingency money allocated to the project."

Most of the work took place along the 500 block of Main Street, though the project included the 100, 200 and 300 blocks, as well. The 500 block has been closed to vehicular traffic in the morning and afternoon for 10 months. It officially reopened full time Monday evening, marking the finish of the construction project.

Drivers will notice that there's no striping on that block of the street. It's meant as an encouragement for vehicles to slow down and interact more with pedestrians.

Walkers will notice improved sidewalks, thousands of plants, several trees and new metal bridges that allow people to walk over a garden planted underneath. All of the added vegetation serves as a natural way to treat water runoff before it reaches the Arkansas River.

The low-impact development technique of treating water runoff is a method that is gaining ground across the country. This is the first project of its kind in central Arkansas. The project is part of Little Rock Mayor Mark Stodola's effort to revive Main Street as a Creative Corridor.

"When we started this, everybody said this was an unreasonable task. ... The challenge was turning Main Street into a 24/7 live, work, play environment," said Stephen Luoni, director of the University of Arkansas Community Design Center that designed the project.

The city hosted an opening event Monday where Luoni and others spoke about the project before a tour of the street.

Luoni explained that the landscape of the sidewalk areas are meant to "act like rooms." He suggested putting furniture outside for people to congregate.

Along the 200 block of the street, workers replaced asphalt with porous pavement that allows excess storm water to flow through it.

Unexpected underground conditions account for some of the contingency money that had to be used. Added plants and street lights make up the rest of it. That's normal for a project of this size, Hood said.

A federal Environmental Protection Agency grant paid for $900,000 of the project. The remaining city funds are a mix of sales tax revenue, money from a 2013 street and drainage bond and a small amount from the city's general fund.

Stodola touted at Monday's event that more than $100 million in private development has come to the area since the public investment along the street.

The city hasn't tracked that number itself. Private developers have reported how much they anticipate to spend in their development projects along the corridor.

Those developments include office building renovations, new restaurants and apartment buildings, the Arkansas Repertory Theatre renovation, the relocation of the Urban Montessori School and the coming Little Rock Technology Park.

A list started by local developer Rett Tucker and updated by other private developers shows that as of September, more than $112 million in private development is planned between the 100 and 800 blocks of Main Street.

That total doesn't include a $22 million commitment of tax revenue to the tech park that will be located at the corner of Capitol Avenue and Main Street.

Ron Curry, administrator for EPA Region 6 that includes Arkansas, said that of all the cities he's visited within the five-state region, Little Rock is "truly unique" and demonstrates what can come of a community's public and private sectors working together.

In addition to the lights already added along the street, Stodola said it's his plan to use grants from private foundations to add a marquee that will make Main Street resemble a miniature Times Square.

The marquee would advertise productions coming at the different venues in the area. Stodola cautioned that the city doesn't know yet if it has the funds for that project, though it has acquired some grant money.

Overall, the Main Street project has done a good job of integrating vehicle traffic, parking and pedestrian uses of a roadway, Stodola said. It's a transformed way of thinking compared to how Main Street was used in the 1980s, he said.

"It's changed from back in the '80s when we had a bad experience with the Main Street Mall that was blocked off completely. We learned that's not what you want to do -- take away traffic completely," Stodola said.

"I truly hope [what is completed now] is a first phase of a bigger project," he added. "I'm truly passionate about this."