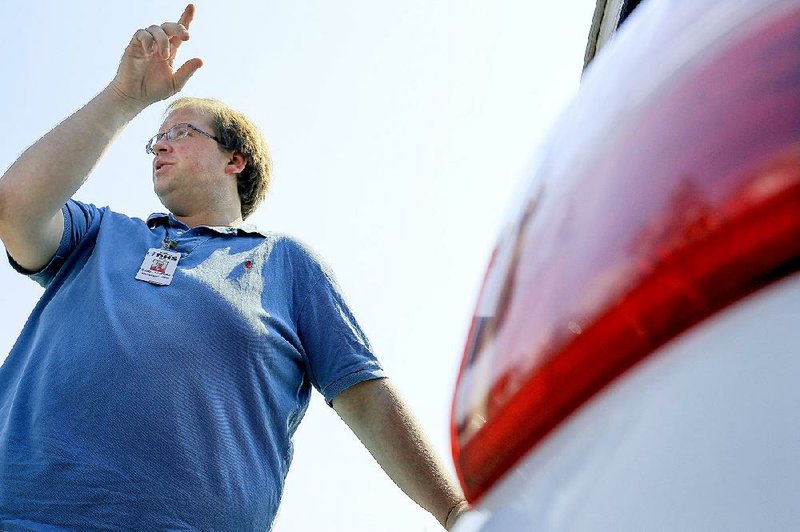 A circular saw and a power drill sit next to a cardboard box filled with a roll of paper towels, bleach, roach fogger, lice treatment and manila file folders in the trunk of state social worker Chad Langford's white Toyota Camry.

The 31-year-old pushed his wire-rimmed glasses back on his nose, then thumbed through the file folders, with their contents printed on the individual tabs.

"If they need anything, whether it's a form or bug spray, I want to have it ready right then," Langford said.

Langford is one of dozens of Arkansas' Children and Family Services Division social workers specifically hired and trained in the past two years as a Differential Response caseworker.

The new program -- which began in 2012 in select Arkansas counties and expanded statewide in fall 2013 -- offers an alternative approach to responding to allegations of child neglect.

Instead of the traditional investigative response, which often pits parents against social workers, the cases assigned to the Differential Response program are set up as a partnership, with both sides working together. Participation is mandatory for the parents, but the approach is built on collaboration.

"We don't just show up at their house without calling first to set up an appointment," Langford said. "It's not accusatory. It's 'You need some help and I'm here to help you.'"

The recently released two-year results measuring the program's success are encouraging enough that Cecile Blucker, the director of the state's Children and Family Services Division, is working to expand the culture of collaboration throughout the division.

"This is a better, strength-based approach. It's proactive and not reactive," Blucker said. "What we are trying to do is build healthier families. This addresses the family's needs as a whole."

Through the fourth quarter of fiscal 2015, which ended June 30, there were 33,701 reports of child maltreatment made to the Child Abuse Hotline. About 82 percent, or 27,646, were routed to the Children and Family Services Division for investigation. Of that number, 13 percent, or 3,609 cases, were assigned to the division Differential Response program.

The Child Abuse Hotline staff screens the calls to determine if they will be routed to the investigative track or to the Differential Response program. The child's age and disability factor into the decision to move a case into the Differential Response program, as well as the type of allegations, which include inadequate food, clothing, shelter or supervision; educational, environmental or medical neglect; or children who are locked out of their homes.

More serious maltreatment allegations -- such as striking a child age 7 and older in the face, striking a child with a closed fist, human bites, sprains or dislocations, or throwing a child -- can also be sent through the Differential Response program if they allegedly occurred more than a year ago or if the injury cannot be verified through physical signs, medical information or dated photographs.

The Differential Response program has decreased the number of children being placed in the state's overburdened foster-care system.

"Should children come into the system because their house is dirty or because their parents just can't buy a washer and dryer? We assist the families in finding the resources," Blucker said.

The social workers direct the families to food pantries, clothing sources and churches that offer utility payment assistance. The program links faith-based and community organizations with those in need. Private businesses -- such as Lowe's Home Improvement stores, which have donated damaged but working washers and dryers and other appliances to families in the program -- are also part of the Differential Response network.

Langford, the social worker, is stationed in Hot Springs and covers Garland, Montgomery and Polk counties.

In his Hot Springs office, he keeps a storage room filled with donated living supplies -- clothing, dishes and furniture. Dozens of volunteers sort and keep the items organized.

Blucker said the communities are very much aware of what the needs are.

Arkansas is one of 16 states that has expanded the Differential Response program in all its counties. Seven states offer the program only in select counties and eight are in the planning stages.

Since the beginning of the program in 2012, there have been 8,751 cases processed through the Differential Response Program. Of that number, about 2 percent, or 175, were involved in another true finding of child maltreatment within 12 months.

Of the 3,609 cases assigned through the fourth quarter of fiscal 2015 to the Differential Response program, 1.5 percent, or 55, were involved in another true finding within 12 months.

Of the 9,532 cases found to be true that were routed through the traditional investigative response in 2015, 9.25 percent, or 882, experienced a recurrence of maltreatment within 12 months.

Dr. Ben Sigel -- an assistant professor with the University of Arkansas for Medical Sciences Department of Psychology -- said the Differential Response program lessens the trauma on children as well as the adults, as well as the stress on social workers.

"It gives more flexibility to the agency and the investigators. Social workers feel more helpful," said Sigel, who works primarily at the Child Studies Center at Arkansas Children's Hospital with children who have experienced maltreatment.

"The child is typically not taken out of the home and put in foster care. The process is not as traumatic for the kiddos and their families. And I imagine it's a lot less expensive because it doesn't have to go through a lengthy court case and other processes."

Blucker said the reception to the new program by division staff staff has been "overall very positive." The division has expanded the Differential Response techniques throughout the organization by including the specialized training for new hires as well as existing employees and having staff follow Differential Response workers.

"This is a new way for us to be seen as a helping agency," Blucker said. "Through Differential Response, you have a say -- input into the outcome. The parents are being valued. If we can safely keep families together, then that's what we're going to do. With Differential Response, the child nor the parents are stigmatized. They are able to stay close to relatives. We can build them up so that they do not come back into the system."

Langford said his career as a Differential Response social worker is very similar to the training he received as an education major in college and his previous experience as a camp counselor.

"I cover some very low-income counties. The families are doing the best they can with what they have and what they've been taught," he said.

"You can't walk into someone's house and say, 'Clean it up.' You have to go room by room and show them. You have to explain why they need to do the things you're teaching them. You have to get to the root issue. If a child is going to school smelling bad, you have to show them what needs to be done and why."

Langford said his personal standard of cleanliness is very high, but he is careful not to be judgmental with the families he serves.

"I do have to judge as far as the safety of the children," Langford said. "But I have to put myself in their position. It's hard to gain their trust. I go in there with respect. I'm not a sugar coater. I tell it like it is. But I'm not going to do them any good if I put them on the defensive. We work together to solve the issues and the result is a stronger family."