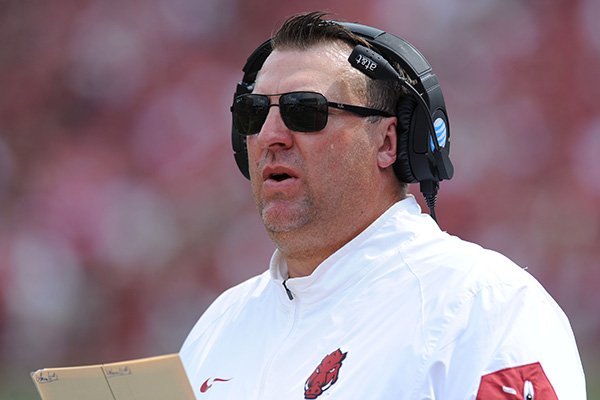 Arkansas coach Bret Bielema watches from the sidelines against the University of Texas at El Paso Saturday, Sept. 5, 2015, during the first quarter of play in Razorback Stadium in Fayetteville.

FAYETTEVILLE -- Bret Bielema's biggest frustration with Arkansas' 1-1 start is due to the Razorbacks' backsliding on some of his core principles: playing physical, winning key situations like third and fourth downs and the red zone, and staying away from self-inflicted problems like penalties and turnovers.

Poor performances in all of those areas helped contribute to the Razorbacks' 16-12 upset loss to Toledo Saturday in Little Rock.

Bielema let out a deep sigh Monday when talking about what pained him most.

"The ... most disappointing for me, just because it's the biggest telling factor of what kind of discipline you have, is the penalties," Bielema said. "Unforced penalties. Holding is a choice. If we get an occasional face mask or defensive pass interference, something that's an aggressive penalty, then maybe you get it."

The Razorbacks were flagged for holding six times.

"We've got to erase those. They take points off the board and put you in bad situations, second and 18, or first and 20. We overcame some of those Saturday, which is not going to happen every week either."

Holding calls on tight ends Hunter Henry and Jeremy Sprinkle shortened second-quarter pass receptions of 28 yards to Drew Morgan and 14 yards to Henry, respectively. An infraction on Denver Kirkland came on the final play of the first half, wiping out a 6-yard run by Kody Walker.

"I heard some guys over there talking to Sam about penalties," tight ends coach Barry Lunney Jr. said. "They should have been talking to me. It was our position that had three or four of the penalties.

The most difficult holding call of all -- by Eric Hawkins on Toledo punter Michael Julian -- put Jared Cornelius' 59-yard punt return touchdown back on the Toledo 26 and eventually led to an intercepted pass from Brandon Allen in the Rockets' end zone.

"It was for a split second -- on the punter," Bielema said of Hawkins' transgression. "You know, I mean, just run the punter over."

Said Cornelius, "Coach B had sketched up the perfect return for us. I just had to catch it and run. I was bummed out when it got called back, but things happen."

A holding call against Frank Ragnow brought back a 6-yard run by Alex Collins during the Razorbacks' 21-play drive in the third and fourth quarters that reached the Toledo 3 before resulting in a short Cole Hedlund field goal.

Henry was flagged again on the right edge during a Collins' 3-yard burst to the Toledo 1 on Arkansas' second-to-last drive, which led to a loss of downs.

Bielema's exasperation over the run of weird plays and penalties that led to Arkansas' loss was evident during his postgame remarks on Saturday.

"We could have won that game so many times in the first half, maybe even the third quarter, and just weren't able to do it," he said.

Arkansas has only one turnover through two games, but it was critical. Keon Hatcher fell down on a crossing route in the end zone a few plays after the Cornelius' punt return was pushed back, and Allen's pass was intercepted by safety DeJuan Rogers.

"We've got to do better," defensive coordinator Robb Smith said. "That's a critical area for us, and that is one of our five edges."

The red zone haunted Arkansas against Toledo. The Rockets scored two touchdowns on three trips inside the Arkansas 20; the Razorbacks came away with one field goal on its five trips in the red zone.

"One for five, can't win games like that,"Allen said.

The Razorbacks' last two possessions, which reached as far as the Toledo 1- and 16, both ended on downs. Allen had Henry open over the middle on the second-to-last play of the game, but overthrew him. The final play ended with a scramble play and Allen misfiring for Hatcher in the end zone.

"The biggest thing is it's tough to pass in the red zone," Allen said. "The field shrinks and windows get a lot tighter, so it's difficult to pass the ball down there, but that's where that run game really steps up and makes it easier for you."

The final "edge" of Bielema's system is earning everything. He said Monday the Razorbacks put forth a textbook example of how to lose a game that was imminently winnable.

"We wouldn't have been happy, obviously, coming out of there, but we would have come out of there with a W and felt totally different," he said. "To me this is a situation that, as bad as it was to live through, as bad as it absolutely, positively wrenches my stomach, my heart, my soul and everything that we have, I think it's something that we had to go through."