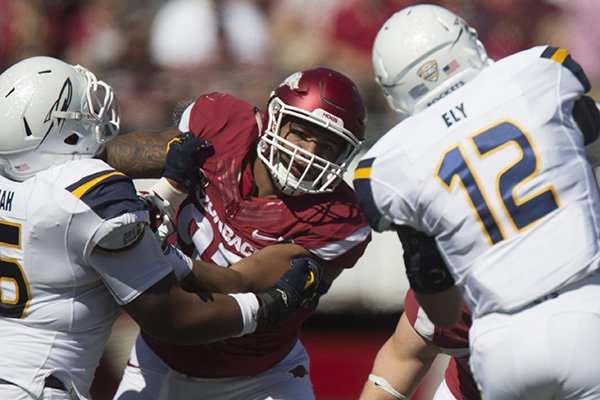 FAYETTEVILLE -- Arkansas' defense is suffering from a lack of sacks.

Through two games, 94 individual players on Football Bowl Subdivision teams have more sacks than the Razorbacks, with Iowa State's Dale Pierson at a national-leading five.

Arkansas has one sack -- by senior nose guard DeMarcus Hodge for a 6-yard loss against Texas-El Paso -- going into Saturday night's game against Texas Tech at Reynolds Razorback Stadium.

The Razorbacks are among 11 teams averaging 0.5 sacks per game and are tied for 111th and last in the nation. The other 10 teams with one sack include some high-ranking company -- No. 10 UCLA, No. 12 Oregon and No. 20 Arizona -- along with Bowling Green, Idaho, Illinois, Tulane, San Jose State, West Virginia and Wyoming.

"It is frustrating that we don't have more sacks," Hodge said. "We definitely want to get a better pass rush. There are some small things we need to do better to get to the quarterback a little bit quicker and knock some balls down.

"We've worked on that in practice this week, and I think that's going to be a big help, especially against a team that passes as much as Texas Tech."

Red Raiders quarterback Patrick Mahomes has completed 51 of 86 passes for 786 yards and 8 touchdowns this season against Sam Houston State and UTEP without being sacked.

Texas Tech is among eight teams, including Arkansas, not to allow a sack this season. Toledo, which beat Arkansas 16-12 last week, hasn't allowed a sack in its one game.

Rockets quarterback Phillip Ely completed 21 of 38 passes for 237 yards against the Razorbacks, who didn't have any quarterback hurries according to game statistics.

"He was getting rid of it pretty quick," Arkansas Coach Bret Bielema said. "To get a sack on Toledo was going to be difficult."

Bielema said the Razorbacks got some pressure on Ely early but not throughout the game.

"You get a little bit frustrated, the defensive linemen start staying at the line of scrimmage a little bit more instead of pressing up the field, so it's a task," Bielema said. "We've got to take our shots when we get it."

Defensive line coach Rory Segrest said if the Razorbacks aren't getting sacks because teams get off passes so quickly, they still need to create pressure up front.

"The thing we talk about with the defensive line is affecting the quarterback," Segrest said. "You're not always going to get those sacks, but you've got to affect him. His arm, his vision, his feet, you've got to do something to get him out of his rhythm.

"We've just got to be consistent the whole game, making sure we're continuing to add that pressure and getting shots if we're getting there in time."

"If the quarterback is comfortable in the pocket, it's easy for him to sling the ball around," Johnson said.

Arkansas has four quarterback hurries this season, two by linebacker Khalia Hackett and one each by linebacker Brooks Ellis and defensive lineman Mitchell Loewen.

Deatrich Wise, a defensive end who on long-yardage situations plays tackle to help the pass rush, is the only lineman with a pass breakup.

"We're not meeting our goals defensively, but if we just keep chipping away and doing what we're supposed to do, the sacks will come," Wise said. "We've got to fine-tune our moves a little bit and see things a little bit quicker. We need to perform better and get a sack or get a [pass breakup]. It has to be one or the other."

"I think you have to pick your spots there," Smith said. "I think there are times when situations dictate that and there are other times where I don't think you want to get caught heavy one way or the other.

"I think if you can play it straight down the middle you're going to give yourself the best chance."

"You can't always replace guys like that, but we have some good talent in place," Segrest said.

"Led has come in and done a great job for us," Segrest said. "We've got some good quality depth. We've got a lot of guys with quality playing experience."

When the Razorbacks beat Texas Tech 49-28 last season, they didn't sack Davis Webb -- now the backup quarterback -- but they had two interceptions and Ellis had four pass breakups and Philon and Winston each had one.

Those defensive plays helped offset Davis passing for 252 yards and three touchdowns, but getting similar pressure on Mahomes doesn't figure to be easy. He's shown good mobility, rushing for 71 yards on 11 carries this season, and the Red Raiders return all of their offensive line starters from last season when they allowed 13 sacks in 12 games.

"He's a guy who can really extend some plays," Segrest said of Mahomes. "He's just kind of run around and gotten himself away from pressure and completed some big passes down the field.

"The biggest thing we're going to focus on is making sure he doesn't escape the pocket and making sure we're affecting him on all throws."