Lawmakers out to foil shutdown

Today’s Planned Parenthood vote a bid to sap anger in GOP by ANDREW TAYLOR and ALAN FRAM The Associated Press | September 18, 2015 at 3:35 a.m. 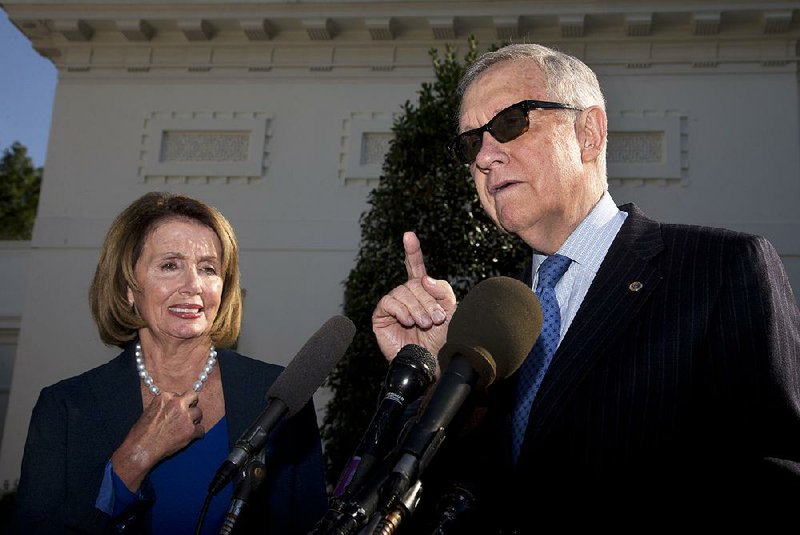 Senate Minority Leader Harry Reid of Nevada, with House Minority Leader Nancy Pelosi of California., talks to reporters Thursday outside the West Wing of the White House in Washington after a meeting with President Barack Obama. (AP / MANUEL BALCE CENETA )

WASHINGTON -- House Republican leaders scrambled Thursday to head off a government shutdown in two weeks over some conservatives' demand that any stopgap spending bill block federal funds for Planned Parenthood.

Leadership sought an outlet for GOP lawmakers' anger after this summer's release of videos secretly recorded by abortion foes who contend they show that Planned Parenthood illegally profits from selling tissue from aborted fetuses to medical researchers.

Unclear is whether a vote today to defund Planned Parenthood and other steps will be enough to placate conservatives, emboldened by criticism of the organization at Wednesday's GOP presidential debate.

Temporary funding legislation is needed to give Congress more time to sort through differences over a full-year spending bill that could ease a budget freeze facing the Pentagon and domestic agencies. Top congressional Democrats exiting a meeting with President Barack Obama on Thursday said any temporary funding measure should have a short time span and that Democrats would demand increases for domestic agencies.

"We want to make sure we have equal money for defense and nondefense," Senate Minority Leader Harry Reid, D-Nev., said.

In the final months of the year, another possible shutdown looms over Obama's demand that the GOP-led Congress increase the nation's borrowing authority. The deadline to keep the government running is Oct. 1.

Some conservative lawmakers and tea partiers are threatening to try to topple Republican House Speaker John Boehner, a foe of abortion who has held the speakership since January 2011.

"We've seen promises to fight tooth and nail on things in the past, and it hasn't really materialized," said tea party-backed Rep. Matt Salmon, R-Ariz. "I think there will be a point where the thin ice breaks."

Boehner and Minority Leader Nancy Pelosi, D-Calif., met for 20 minutes after she returned from meeting with Obama. Aides declined to characterize the session.

Rep. Thomas Massie, R-Ky., accused Boehner of "subverting our republic" and working for lobbyists rather than "what the constituents of our district want."

"If you're pro-life, the last thing you want to do is have the focus changed to the government shutdown ... rather than the activities of Planned Parenthood," said Rep. Mike Simpson, R-Idaho, a Boehner ally. "At some point in time you've got to face reality."

The White House, in a statement released Thursday evening, said Obama called the shutdown threat "a game of chicken with our economy that we cannot accept."

At a closed GOP meeting Thursday, Republicans were shown party polling data that showed most Americans haven't seen the videos and that more Americans associate Planned Parenthood with women's health than with abortions. The numbers also showed that most Americans don't want a government shutdown, lawmakers at the meeting said.

A significant majority of Republicans would support Boehner if he were to press for a temporary bill disentangled from the dispute over Planned Parenthood. But a few dozen of the most conservative Republicans have vowed to oppose any such effort, and some are weighing a challenge to Boehner's leadership.

Asked how confident he was that he could defeat an effort to remove him from the post, Boehner said, "Very."

Other GOP members say tea party lawmakers have driven GOP leaders into unwinnable fights. They highlight the 16-day partial government shutdown over health care two years ago and a failed attempt this year to use a Department of Homeland Security funding bill to reverse Obama's moves easing the threat of deportation for millions of immigrants living in the country illegally.

"They're kind of like their own party," said Rep. Devin Nunes, R-Calif. "It's unpredictable what they're going to do."

Hillary Rodham Clinton went on the offensive Thursday, the day after the attack on Planned Parenthood was front and center in a debate of GOP presidential candidates.

"It's bad enough to see hateful rhetoric and lies in a presidential debate. But just like the candidates on stage last night, Republicans in Congress want to defund Planned Parenthood. And they're willing to shut down the federal government to do it, no matter how bad that is for our country," said the Democratic front-runner.

Information for this article was contributed by Stephen Ohlemacher and Erica Werner of The Associated Press.