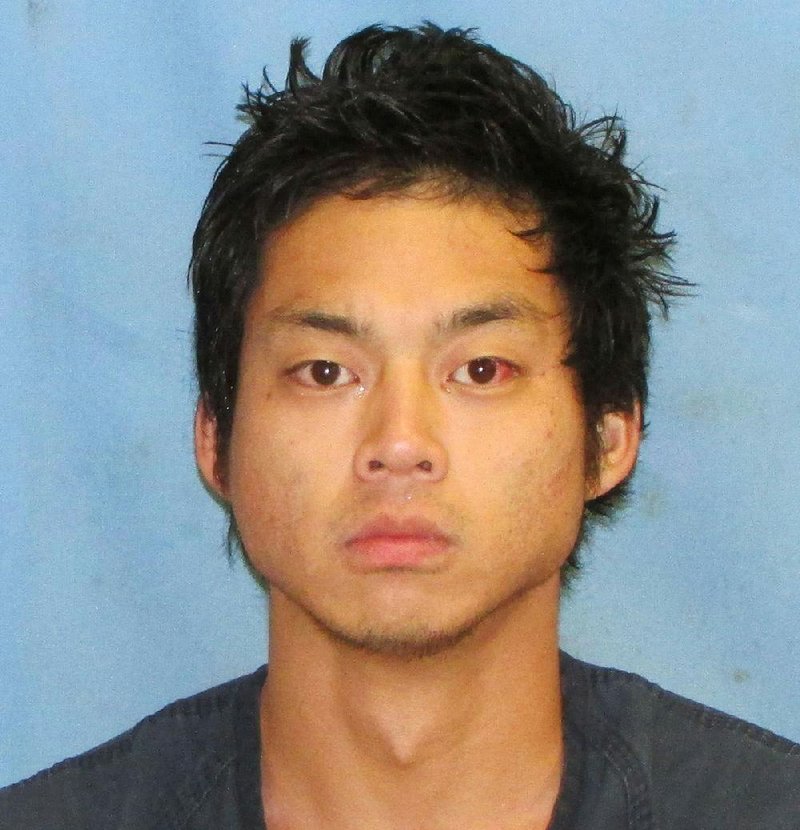 A Little Rock police detective's report filed Thursday in district court provides new details about a vehicle chase that ended with one pedestrian dead and another hospitalized this week.

The report was part of the arrest affidavit for Jordan Matthew Vandenberghe, 24, who is accused of fleeing from police Tuesday in a stolen Nissan Maxima and crashing it in the 10000 block of Chicot Road. The car struck and killed Trendia Horton, 39, as she was jogging on the sidewalk with her daughter, Nahtali, 18.

L̶i̶g̶h̶t̶l̶e Fowler also sentenced Vandenberghe to one year in the Pulaski County jail in an unrelated case. Court records show that he had been on probation after convictions for felony theft and criminal mischief.

At a news conference Wednesday, Police Chief Kenton Buckner identified the officer involved in the chase as Zachary Hardman.

Buckner repeatedly declined to release further details in the case -- such as the speed and duration of the chase, and whether Hardman had followed department protocol and activated his vehicle's emergency signals during the pursuit.

In declining to comment, Buckner said the investigation was ongoing and that there was a possibility that the case could involve civil or criminal litigation at some point.

Neighborhood residents and members of the Horton family criticized the officer's decision to chase a car involved in a nonviolent crime through a mostly residential area.

Also, according to several witnesses, the police car's lights and siren weren't turned on until after the chase had ended.

But the police report filed Thursday in district court by detective Kevin Simpson says Hardman, a three-year veteran of the department, "activated his emergency equipment" when the chase began at 6:48 p.m. at 7601 Baseline Road.

The report states that Vandenberghe drove the car into the parking lot of Life Line Baptist Church and "accelerated and fled southbound on Chicot at an extremely high rate of speed with Officer Hardman in pursuit."

It continues by stating that Vandenberghe lost control of the Maxima when he struck another vehicle. The Maxima careened onto the sidewalk, flipped over and struck Trendia and Nahtali Horton before coming to rest upside down.

Vandenberghe reportedly got out of the vehicle and tried to flee but was quickly apprehended. He received treatment for minor injuries and was arrested.

By that account, which is unattributed in the report, the chase spanned less than a mile.

The report states that Vandenberghe provided a statement to investigators "admitting that he fled from police" at speeds between 70 and 90 mph "after the officer got behind him and turned on his blue lights."

"He stated that he had stolen the vehicle [Monday] and that is why he fled," the report read.

Police said Vandenberghe's girlfriend, Leia Holland, 27, was in the car and was not injured in the crash. She told investigators that she asked Vandenberghe to stop fleeing, but "he told her that he couldn't and he then accelerated," according to the detective's report.

Holland was not charged in the case.

Other police reports released Thursday shed light on the theft of the Nissan Maxima.

Victor Martinez of Little Rock reported the car stolen Monday afternoon, according to a police report. He told officers that he'd gone inside a Valero gas station at 7200 W. 12th St. and left the keys in the vehicle. Martinez said an Asian man wearing a blue shirt got into the vehicle moments later and drove away.

Police weren't immediately able to identify Vandenberghe, who was born in South Korea, as a suspect in the theft. Officers viewed surveillance footage but noted "the video was very poor quality and hard to see the suspect."

It's not the first car theft that police have connected to Vandenberghe. Officers found him asleep in a 2007 Toyota Camry at 3700 W. Fourth St. on the morning of Aug. 15, surrounded by syringes and drug paraphernalia, according to an arrest report. The Camry had been reported stolen from the parking lot of a Little Rock hotel two days earlier, reports show.

In that arrest and his arrest Tuesday, Vandenberghe had stolen bank cards and identification cards in his possession, police said.

Police spokesman Lt. Steve McClanahan said Thursday that he was awaiting word from Buckner on when additional details will be released in the case. Buckner has said police dashboard camera footage from the chase will be made public at some point.

Department policy states that "pursuits will be immediately terminated" when the officer "knows the suspect's identity and knows the suspect is wanted only for a traffic violation, misdemeanor or nonviolent felony."

It also prohibits chases that create "clear and unreasonable danger" to an officer, a suspect or the public, particularly through excessive speed or reckless driving.

"The Police Department's primary concern in pursuit situations is the protection of the lives and safety of all citizens and officers," the policy states.

*CORRECTION: Attorney Lea Ellen Fowler sat as a special judge Thursday in Little Rock District Court and set bond and a jail sentence for Jordan Matthew Vandenberghe, according to the court docket. This story in Friday’s editions incorrectly stated who was on the bench.