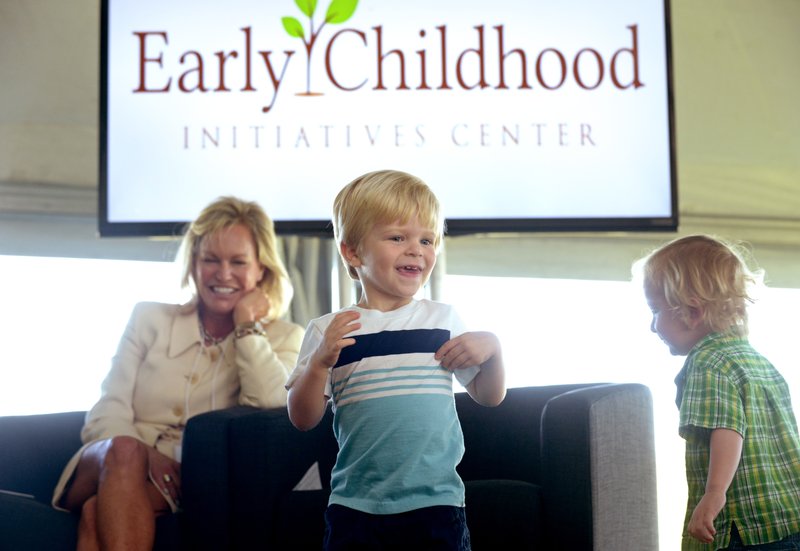 BENTONVILLE -- A $14.3 million move and expansion of the Helen R. Walton Children's Enrichment Center will extend the center's efforts to improve the quality of early childhood programs in five counties in Northwest Arkansas.

The enrichment center and its Early Childhood Initiatives Center are expected to move in the summer of 2017 to vacant property on Northeast J Street adjacent to Crystal Bridges Museum of American Art and the Scott Family Amazeum, the center's executive director, Michelle Barnes, announced Thursday morning.

Officials with the Bentonville center have raised $12.5 million toward the project with contributions coming from organizations such as the Walton Family Foundation and the Wal-Mart Foundation, Barnes said. The center has a goal to raise the rest of the money by the end of the year, she said.

Barnes announced the move during an event attended by a few hundred representatives of businesses, government and the community. The event included a panel discussion of the importance of learning for children from infancy to age 5.

The center is a nonprofit partner in the national Invest in Us campaign, announced by President Barack Obama two years ago to encourage large companies and foundations to support expanding access to and the quality of early childhood programs, said John King Jr., deputy secretary of education at the U.S. Department of Education, who participated in the event.

Barnes told a story about a request she once received to open a second location of the Helen R. Walton Children's Enrichment Center.

"There was a lack of access to high quality care and education," Barnes said.

The center's board of directors considered that option but instead established the Early Childhood Initiatives Center, which opened in 2009, Barnes said. The idea was to work collaboratively with the nearly 500 other area child care centers to offer all young children high quality care and education.

When the center opened in 1982 at 1701 N.E. Wildcat Way in Bentonville, 19 percent of child care centers in Northwest Arkansas were accredited for quality through the state's Better Beginnings program, Barnes said. That percentage has increased to nearly 50 percent of area child care centers.

Despite the gains, of the 32,000 children in child care programs in Northwest Arkansas, 18,000 are in programs that meet the state's minimum standards for licensing but have not attained a quality accreditation.

"What matters most is the 32,000 children receiving that high quality of education," Barnes said.

Children need access to programs that offer social and emotional experiences and support their physical, cognitive and language development, she said.

"This is about a partnership with families as they're going to work," she said.

Work to design buildings to house the Children's Enrichment Center and the related Early Childhood Initiatives Center will begin in November, with construction beginning six to eight months later.

Recent research shows that 90 percent of brain development occurs by the time a child is 5 years old, said Linda K. Smith, deputy assistant secretary and interdepartmental liaison for early childhood development for the U.S. Department of Health and Human Services. The ability to learn cognitive skills travels through a portion of the brain that controls the social and emotional development of a child.

The federal agency is interested in communities coming together with the support of the state and federal government to increase the quality of early childhood education, Smith said.

"We need more businesses and foundations like you have here," Smith said. "It's so great to come here and see companies of this size with an investment in this that really get it now."

The Invest in Us campaign has led businesses and foundations across the country to commit $340.8 million toward expanding access and improving the quality of early childhood education, King said.

The efforts of businesses and philanthropic organizations to support the Bentonville center's goal to improve the quality of early childhood education across the region provides a model for the kind of cross-sector partnerships the president wants to see across the country, King said.

King coupled his appearance Thursday at the announcement in Bentonville with a visit to administrators in the Springdale School District. He toured Springdale's early childhood center and took a trip to J.O. Kelly Middle School, where additional prekindergarten space will be built, said Rick Schaeffer, district spokesman.

King and Smith both said they hope to share information with Congress and other policymakers about the impact of investments in early childhood education in Northwest Arkansas.

Lynne Walton, a member of the Walton Family Foundation board and wife of Jim Walton, recalled being a mother to two young children when Helen Walton became aware of the limited options families had for child care. That concern led Helen Walton to bring together a group of people to plan for an enrichment center for young children that would include activities in music, drama and outdoor play, Lynne Walton said.

"Helen was dedicated to helping improve children's lives," she said. "She became aware of a need. She brought people together to solve the problem."