Ceremony at Capitol recognizes past POWs 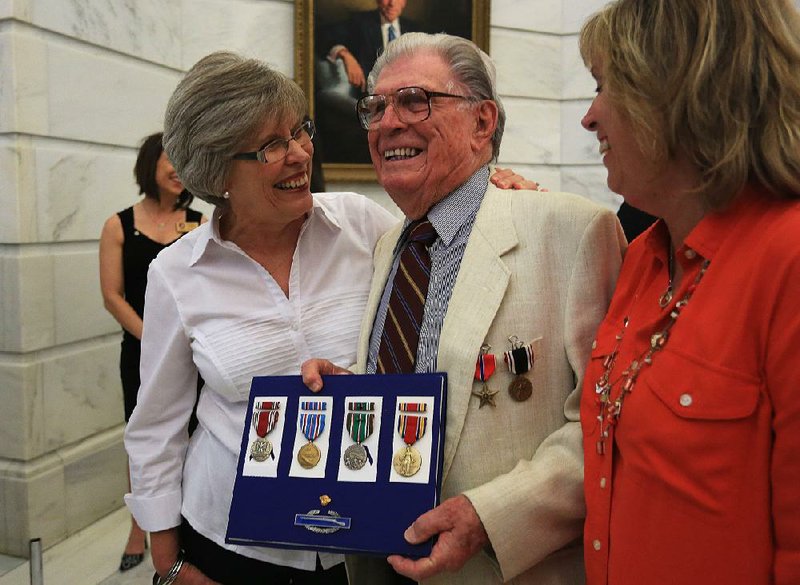 Courtney Renshaw, 92, a World War II veteran, celebrates with his daughters, Kay Fellone (left) and Dena Gunderson, after he was awarded several medals, including a Bronze Star, during the National POW/MIA Recognition Day ceremony Friday at the state Capitol. ( Rick McFarland)

The Capitol rotunda was filled Friday morning to honor two Arkansans, one posthumously, who were taken prisoner while fighting overseas more than a half-century ago.

Friday was national POW/MIA Recognition Day, and the servicemen, civilians and veterans who gathered paid tribute to all former prisoners of war as well as the more than 83,000 service members who are still classified as missing in action.

Col. James Treece, head of the Arkansas National Guard's 87th Troop Command, addressed the crowd, highlighting the international effort to locate and repatriate soldiers classified as missing in action since World War II. He said the mission is daunting but necessary to honor past sacrifices.

"There are people who are of the opinion that this quest to bring everyone home is a waste of time and resources," Treece said. "Well, they are wrong."

The ceremony recognized Pfc. Courtney Renshaw for his time spent in German captivity during the final months of World War II as well as Cpl. C.G. Bolden, a Clinton native who died in a North Korean prison camp in April 1951 from wounds suffered while in captivity.

Bolden's remains were returned to the United States in the 1990s and, with the help of the military's POW/MIA Accounting Command Laboratory, were identified late last year and returned to Arkansas in February for burial in Van Buren County.

Bolden has been honored with the Prisoner of War Medal, the Korean Presidential Unit Citation and the Purple Heart. On Friday, Bolden's widow received a Korean Combat Star for her first husband's sacrifice.

The couple were married only a few years before he left for Korea with the 38th Infantry Division. He was captured in January 1951 after a heavy engagement.

He managed to keep at least one possession after his capture.

"He had his Bible in his pocket," Johnson said. "I don't know how he got away with that. They even stripped them of their dog tags. They read his last rites from that Bible and threw it in the grave with him. He was only 23 years old when he died."

Renshaw, now a 92-year-old retired architect living in North Little Rock, was deployed to France shortly after the D-Day landings in 1944. While on patrol in late November 1944, his squad was captured.

Until his release, Renshaw worked in a German lumber mill. While under guard, he was forced to bury two British airmen whose plane had crashed nearby.

In addition to being given several military medals that he had lost years ago, including a World War II Victory medal and a combat infantry badge, Renshaw also received a Prisoner of War medal and a Bronze Star.

Every soldier was aware of the risks they faced as they fought the Nazis, Renshaw recalled.

"It was a fact of military life. As we said in the infantry: You were either going to get killed, wounded or captured. Or come home. It was just a matter of life, I think."