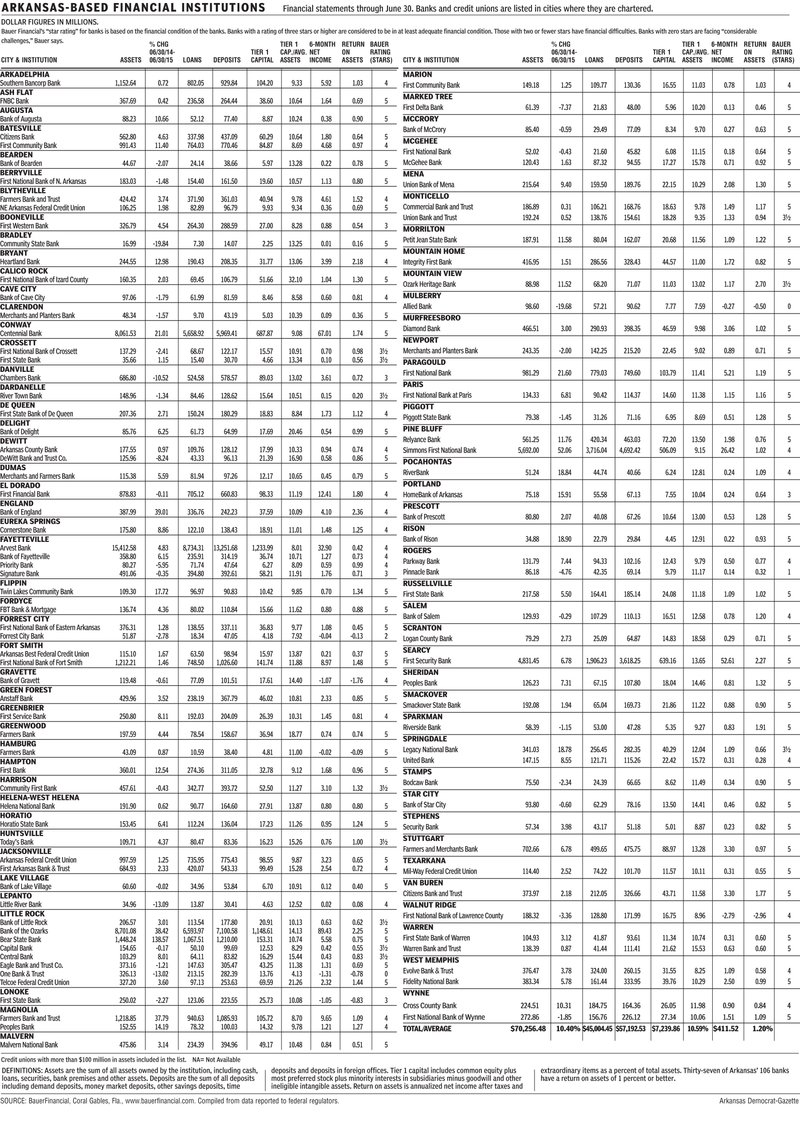 Burdensome bank regulations and bank consolidation are causing a decline in the number of branches in rural Arkansas, say executives with one of the largest rural banks in Arkansas.

The biggest decline has come in banks with less than $100 million in assets, which have dropped by 85 percent from 1985 to 2013, the American Banker said. Nationally, more than 1,500 bank branches closed last year.

Southern Bancorp of Arkadelphia, also among the largest community development banks in the country with almost $1.2 billion in assets, estimates that 96 percent of the banks that have closed were community banks with less than $1 billion in assets.

Thirty-seven Arkansas-based banks have closed since 2008, and 125 branches in the state have closed.

"Bank consolidation is hurting small communities," said Dominik Mjartan, executive vice president of Southern Bancorp, which has branches throughout the Delta in Arkansas and Mississippi.

The Federal Deposit Insurance Corp. said in a study last year, however, that the recent increase in bank consolidation can be attributed to factors that are likely to subside once the economic crisis is over, said Garland Binns, a Little Rock banking attorney.

"The FDIC said that consolidation has had much less impact on the community banking sector than is commonly believed," Binns said.

Binns recently contacted a large number of bankers in the state for an article he wrote and asked them if they believed that the federal Dodd-Frank Act, which was passed in 2010, was the primary reason for the shrinkage in small banks.

"A lot of them came back with different theories about what is causing this," Binns said.

The Dodd-Frank Act mandates sweeping regulatory changes for banks, including in mortgage lending and other areas.

But it isn't just the Dodd-Frank Act that has affected small banks. Federal regulations going back more than 15 years have gradually made it more difficult to run a bank, said one small-town banker who asked not to be identified.

"People talk about Dodd-Frank these days, but there has been a series of [regulations], one thing after another, that are totally absurd," the banker said. "But it's not just banking; it's businesses, too. The government thinks they need to enforce [regulations] on all of us."

"They've cut low-income, first-time homebuyers out of the market," the banker said. "They won't be able to get qualified [in his community or] even in Little Rock."

"[The regulations] affect banks, but [they] really affect consumers," Franks said. "Consumers won't get loans that they may have gotten in the past."

The Bank Department held a town hall meeting recently for bankers to discuss how federal laws are affecting them. Executives from banks of various size participated, Franks said.

Bankers at the meeting expressed concern about their ability to service their current markets, said Luther Guinn, deputy commissioner of the state Bank Department.

"Our bankers continue to be concerned about the costs of complying with the whole regulatory landscape," Guinn said. "That has really created a regulatory burden with additional costs either for adding more employees or hiring consultants [to help with compliance]."

If a small-business owner goes to a bank with billions of dollars in assets and asks for a $10,000 business loan, the bank likely will give him a credit card application, said Darrin Williams, chief executive officer of Southern Bancorp's parent company. Fifty-five percent of Southern Bancorp's loans are for less than $10,000, Williams said.

"The interest rate on a credit card is going to be higher than the interest on a traditional business loan," Williams said.

"The large banks are good banks," Southern Bancorp's Mjartan said. "But they do different underwriting, there's centralization, efficiencies. They are just not your traditional community bank model. For them, it doesn't make a lot of sense to [make small loans]."

The loss of branches could lead to "banking deserts," areas with no access to brick-and-mortar banking services, Williams said.

All 75 counties in Arkansas have bank offices. But five counties have only two offices -- Calhoun, Cleveland, Lee, Nevada and Perry, according to the FDIC.

If a branch closes in the Heights, a Little Rock neighborhood, it isn't terribly significant for consumers or businesses, Mjartan said.

"I can walk to the next [Heights] branch if one closes," Mjartan said. "But if a branch closes in Marvell, the nearest branch would be in Helena 20 miles away."

Research indicates that for every mile a consumer is from a bank branch, access to small-business bank credit decreases, Mjartan said.

"If you live in Blytheville or Helena or Trumann or Clarksdale [Miss.], losing a branch could mean losing your business," Mjartan said.

Williams spoke last month at a meeting on rural banking issues at the Federal Reserve Bank of Kansas City.

The people in rural, economically distressed communities "deserve just as much of a chance to achieve the American dream as those here in Kansas City or Dallas or New York, but they need access to financial products and services," Williams said.