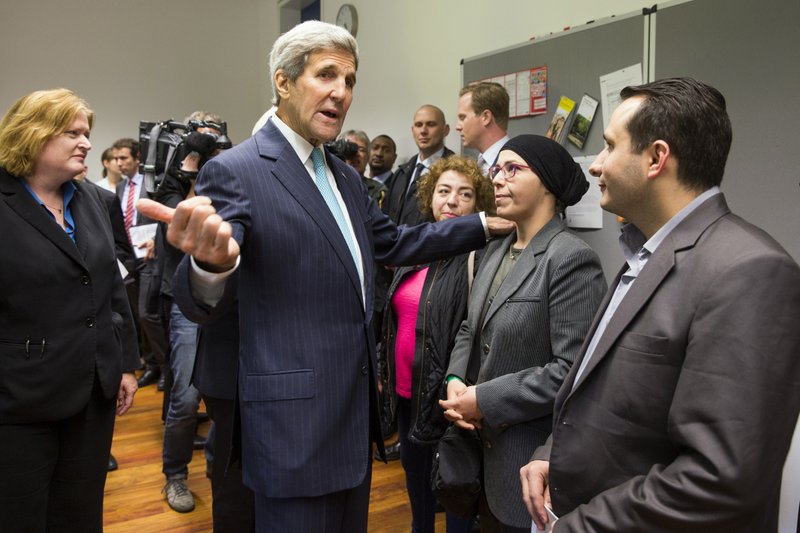 US Secretary of State John Kerry meets with refugees fleeing Syria, at Villa Borsig, on Sunday, Sept. 20, 2015, in Berlin.

BERLIN — Trying to address the Syrian refugee crisis, U.S. Secretary of State John Kerry announced Sunday that the United States would significantly increase the number of worldwide refugees it takes in over the next two years, though not by nearly the amount many activists and former officials have urged.

The U.S. will accept 85,000 refugees from around the world next year, up from 70,000, and that total would rise to 100,000 in 2017, Kerry said at news conference with German Foreign Minister Frank-Walter Steinmeier after the two discussed the mass migration of Syrians fleeing their civil war.

Many, though not all, of the additional refugees would be Syrian, American officials have said. Others would come from strife-torn areas of Africa. The White House had previously announced it intended to take in 10,000 additional Syrian refugees over the next year.

Asked why the U.S. couldn't take more, Kerry cited post-Sept. 11 screening requirements and a lack of money made available by Congress. "We're doing what we know we can manage immediately," he said.

The migrants would be referred by the U.N. refugee agency, screened by the U.S. Department of Homeland Security and resettled around the U.S.

"This step is in keeping with America's best tradition as a land of second chances and a beacon of hope," Kerry said. Kerry also met with some refugee families on the wooded, lakeside resort-style campus of the foreign ministry's education center outside Berlin.

Congressional approval is not required for the expansion of resettlement slots, though Congress would have to appropriate money to pay for the additional effort. Some Republican lawmakers have expressed concerns that Islamic State militants could seek to slip into Europe or the U.S. posing as migrants.