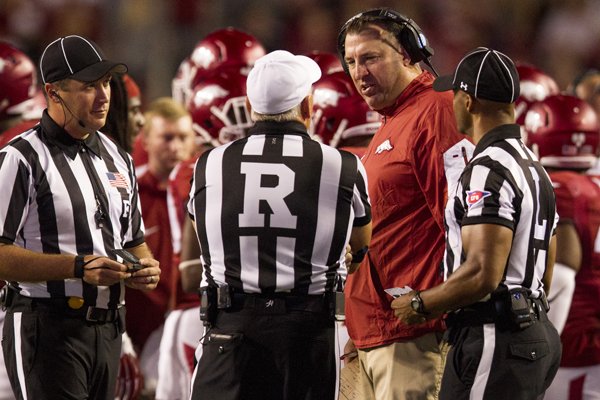 Arkansas coach Bret Bielema approaches the referees after a penalty that retracted a touchdown late in the fourth quarter after an interference call against the offense during their game against Texas Tech Saturday, Sept. 19, 2015, at Donald W. Reynolds Razorback Stadium in Fayetteville.

Today Arkansas and Auburn are picked for shovels required to dig out of messes that few predicted for them.

Auburn's Tigers ranked sixth in the August released AP poll while the Razorbacks ranked 18th. Their Oct. 24 clash in Fayetteville was circled among national must-see games.

National pundits already had snippets written and comments broadcast about the philosophical clashes that Arkansas' Bret Bielema and Auburn Coach Gus Malzahn periodically verbalized at each other's expense. CBS and ESPN figured to wrangle over airing the game.

If it could, even the SEC Network today might be willing to punt Arkansas vs. Auburn to FOX.

The Razorbacks haven't played a SEC game yet and wallow 1-2. They were upset 16-12 in Little Rock by 21-point underdog Toledo and upset, 35-24 last Saturday in Fayetteville by 11-point underdog Texas Tech.

They open SEC play as underdogs against Texas A&M on Saturday at the Dallas Cowboys' AT&T Stadium and the Oct. 3 and Oct. 10 Saturdays at Tennessee and at Alabama before an open date and Auburn.

Auburn is lucky to be 2-1, escaping FCS-level Jacksonville State, 27-20 in overtime two Saturdays ago in Auburn, Ala. before taking a 45-21 SEC beating from LSU last Saturday in Baton Rouge, La.

Auburn's schedule between now and Oct. 24 seems a trifle easier than Arkansas'. The Tigers have an Oct. 3 nonconference homecoming against San Jose State sandwiched by SEC games hosting Mississippi State Saturday and visiting Kentucky on Oct. 15.

However Jacksonville State was projected to be Auburn's easiest game. Obviously it wasn't.

Arkansas and Auburn pay the price of the overrated with great expectations unfulfilled.

Both have nine games left for atonement.

If Bielema needs an example atonement can be achieved, he can refer to Frank Broyles' 1975 Razorbacks. The '75 team attended Saturday's game on their 40th reunion of winning both the Southwest Conference championship and the Cotton Bowl. Arkansas' last team to win its bowl game after winning a SWC championship or SEC West championship, the '75 Hogs overcame heartbreaking defeats vs. Oklahoma State and Texas to close with six consecutive victories, including 31-6 over previously unbeaten Texas A&M in December and 31-10 over Georgia in the Cotton Bowl.

Seeds for the 1975 Hogs' resolve were planted by Broyles after a 1974 season begun with an epic victory over eventual UPI national champion Southern California soured to a disappointing 6-4-1.

Whether bettah or better, that translates into Bielema's task somehow to summon from these Hogs so far not living up to their hype.