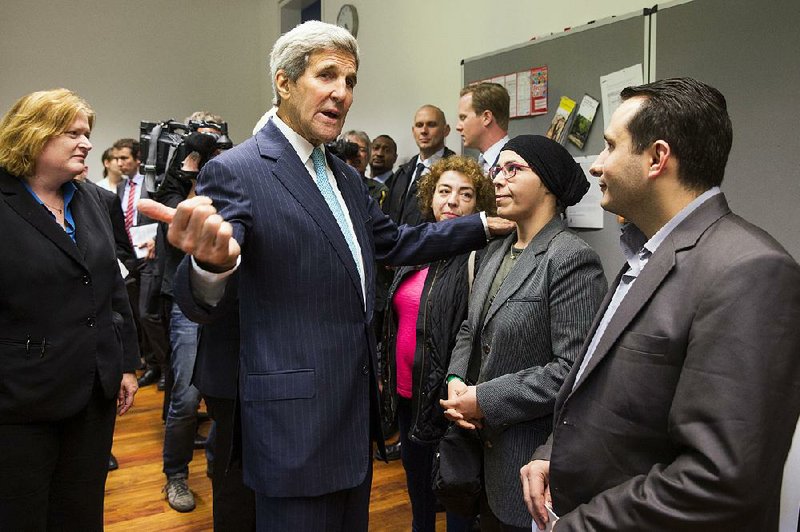 BERLIN -- President Barack Obama's administration will increase the number of refugees the United States is willing to accept in 2017 to 100,000, a significant increase over the current annual worldwide cap of 70,000, Secretary of State John Kerry said Sunday.

The announcement came as Kerry conferred with German officials in Berlin on the wave of migrants that has swamped Europe and met with Syrians who are seeking asylum in Europe.

The response still falls far short of the global demand for resettlement from those fleeing the Syrian war, turmoil in Iraq and Afghanistan, and other conflicts. From Syria alone, 4 million people are in United Nations refugee camps outside the country, and hundreds of thousands of people from that region and Africa have been pouring into Europe.

The Obama administration has been under pressure to accept more Syrian refugees, and Kerry said the United States would explore ways to increase the limit beyond 100,000, while carrying out background checks to ensure that the refugees have not been infiltrated by terrorists.

"We still need to do more, and we understand that," Kerry said in a joint news conference with German Foreign Minister Frank-Walter Steinmeier.

"This step is in keeping with America's best tradition as a land of second chances and a beacon of hope," he said, and added that it "will be accompanied by additional financial contributions" for the relief effort.

The United States has taken in about 1,500 Syrian refugees since the start of the conflict more than four years ago, while Europe has been absorbing hundreds of thousands.

The White House said this month that it would take in at least 10,000 Syrian refugees over the next year, and the administration's decision to raise the ceiling for all refugees worldwide in 2016 will allow for that increase.

Raising the worldwide ceiling to 100,000 in 2017, said a senior State Department official, would enable a further increase in Syrian refugees accepted by the United States.

"The idea is to have a steep ramp up," said the official, who asked not to be identified under the agency's protocol for briefing reporters.

State Department officials have previously said that not all of the additional refugees who would be taken in under a higher cap would be Syrians. Some will be Africans who have been threatened by human-rights abuses, including some from the Democratic Republic of Congo.

U.S. officials said the Syrian refugees accepted by the United States over the next year would be drawn from a list of some 18,000 that the U.N. prepared before the current influx of migrants in Europe.

Last week, more than 20 former senior officials, including some who served in the State Department and Pentagon during the Obama administration, urged the White House to accept 100,000 Syrian refugees.

"We urge that you announce support for a refugees admissions goal of 100,000 Syrian refugees on an extraordinary basis, over and above the current worldwide refugee ceiling of 70,000," they wrote in a letter to Obama and congressional leaders. "With some 4 million Syrian refugees in neighboring countries and hundreds of thousands of Syrian asylum seekers in Europe, this would be a responsible exercise in burden sharing."

That letter was signed by some prominent veterans of the Obama administration: Michele Flournoy, a former undersecretary of defense; Derek Chollet, who served as an assistant defense secretary; Harold Koh, who served as the State Department's legal adviser; Eric Schwartz, who was a senior refugee official in the State Department, and Robert Ford, whom Obama named to serve as ambassador to Syria.

David Miliband, the former British foreign secretary who heads the International Rescue Committee, has called on the United States to resettle 65,000 Syrians by the end of 2016.

Kerry met with his German counterpart at Villa Borsig, a palatial German guesthouse overlooking a lake. Later, with reporters in attendance, they gathered with a small group of Syrian refugees, who asked not to be identified by name because they still have friends or relatives living in Syria.

Asked by Kerry why there has been such a large surge in migrants in recent weeks, the Syrians said they despaired of ever being able to go home and that life in refugee camps was becoming harder as food rations were cut back.

"The reason people are coming now is because they gave up hope completely," one woman said. "We have no hope we will ever live in Syria anymore."

"Are not five years enough for the international community to intervene, especially the United States?" a man asked.

Asked at his news conference why the United States could not accept more Syrian refugees more quickly, Kerry said budgetary constraints and vetting requirements established after the Sept. 11 terrorist attacks limited the scope of the response.

Obama has the authority to increase the refugee cap, but Congress will need to approve the additional funding. State Department officials have said that it cost $1.1 billion to accept and resettle 70,000 refugees in 2015.

"We are doing what we know we can manage immediately," he said. But he did not rule out the possibility that more might eventually be done.

Kerry's visit came as thousands more migrants were waiting at Germany's doorstep in Austria to either enter Germany for settlement or pass through it to get to other prosperous countries in northern Europe.

In recent weeks, so many migrants have entered Germany that local officials are scrambling to find ways to receive and accommodate them.

The German government has been pressing for a European solution to the problem, including a plan to more fairly distribute the new arrivals among the European Union countries. Interior ministers plan to meet Tuesday, and leaders Wednesday, to try to reach an agreement over the plan.

Chancellor Angela Merkel said Sunday that Germany must be realistic in how many refugees the country can take in and pressed her European partners to share responsibility for handling the crisis.

As Merkel and leaders of the other 27 European Union governments seek agreement on how to confront the region's biggest refugee flow since World War II, Merkel said, "It's not just a German challenge" but a European one.

"I'm firmly convinced that we won't be successful if we pretend we can do it all," Merkel said in a speech to a labor union convention in Leipzig on Sunday. "We're a big country, we're a strong country and we want to be a diverse country. But to pretend we can solve all of the world's social problems on our own wouldn't be realistic. We have to keep an eye on reality."

As many as 1 million migrants will arrive in Germany this year, according to Vice Chancellor Sigmar Gabriel, although not all will end up staying. Merkel reiterated that while Germany will be generous in accepting war refugees such as those fleeing fighting in Syria, economic migrants shouldn't expect they'll be able to stay.

In Croatia, migrants climbed through windows and fought for space on trains headed north Sunday as border closures and plunging temperatures increased tensions among thousands in a desperate rush to keep moving.

Scuffles broke out in the border town of Tovarnik when hundreds of people surged toward a train they hoped would take them to Austria. Police tried to hold back the crowd, but were overwhelmed as migrants tried to climb through the windows of the already packed carriages.

Hungary, which closed its border with Serbia on Sept. 15, erected another steel barrier at the Beremend border crossing from Croatia to try to slow the flow of migrants. But they kept coming.

Hungary's decision to shut its border with Serbia set off a chain reaction in Croatia and Slovenia that has forced people to rush from one European border to the next as they try to find a way north. Thousands more continue to brave the Mediterranean in rickety boats as they try to reach countries like Germany and Sweden.

The surge of migrants continues to exact casualties. Two migrant vessels sank in the eastern Mediterranean on Sunday, killing 13 people.

About 15,000 migrants crossed into Austria from Hungary and Croatia over the weekend.

In the Austrian border village of Nickelsdorf, people arrived by foot Sunday after a half-hour walk from the Hungarian town of Hegyeshalom. Then they lined up for buses to take them to shelters in Vienna and other parts of the country. Austrian soldiers stood alongside.

Austrian officials are scrambling to find places for the migrants to stay because many camps are already overcrowded.